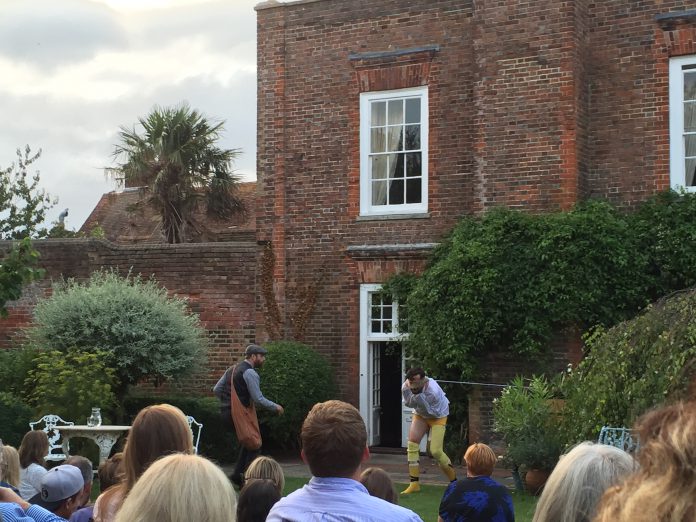 I arrived at about 5 to 7 for a 7 o clock start, having had to rush to get there.
There were no seats left. Some friends ushered me to a patch of chipboard decking to sit on, and kindly offered a jumper as a cushion.
This was my view. However, having been brought up watching three hour long Shakespeare plays in the £5 a ticket standing section of The Globe, I wasn’t going to let an uncomfortable seat or less than perfect view ruin my night. Besides, I could just hold my phone up to take photos.

It was a warm, pearly summer’s evening in the beautiful, historic gardens of Lamb House. The garden was full of happy people laughing, popping Champagne and eating from picnic baskets, as they enjoyed the play.

Geese flew overhead and from the pruned bushes came birdsong and repeated drunken self- ejection by Olivia’s kinsmen. A different drink in hand every time.

I liked Jonathan Broadbent’s Sir Toby Belch, falling out of a bush, holding a can of Speckled Hen. Nice touch.

Ferdy Roberts’ Malvolio‘ s cartoonish descent from ‘stick in the mud’ disapproving of Olivias kinsmen:
“Gabble like tinkers at this time of night.”
to straight-jacketed, Big-Bird-Yellow-Legged, half dressed, tethered, confused narcissist had everyone laughing.
Whoever decided to have someone appear from a bush to hand him a glass of Champagne at end of his shouting and stripping fit is a very funny person.

Siobahn Harrison’s Olivia was engaging and subtley funny. Her face when she realised her husband was a twin was perfect.

The kinsmen loudly spelling out a super X-rated word

“A Ravens heart within a dove”

“That miracle, that queen of gems” The evening ended with an open house. We sipped wine in the fairy lit garden, where we bumped into Community Bus Driver, Pat. She had made Vodka infused Raspberry Fairy Cakes that were so strong, they made your mouth feel like it was on fire.

A magical venue, great play, summery atmosphere. Great, just a shame I missed a few crucial bits because I couldn’ t see!
Go if you can this weekend. You’ll have a brilliant time, just arrive early and bring a picnic blanket!