It took ages for Thursday to come, but eventually it did and, after much planning, she was ready to catch the train. She decided to walk to Billy train with Dante, so he could take the one going to Camber and she could catch the one going to London.

The Camber Billy train was on time but, to DeDe’s annoyance, the London train was cancelled and the station master did not know the time of the next one. As Dante’s train slid out of the station she sat on the platform alone and helpless. She didn’t have a plan B.

All she could do was wait and hope the next train wouldn’t be too long coming. As time dragged on she felt a tear coming, determined to hold it back she walked up and down the platform trying to think happy thoughts. After all she didn’t want to arrive in London with bloodshot eyes, as this would give Vladimir the completely wrong impression.

The more time dragged, the more anxious she became. She worried she would never get to London and would never meet Vladimir. He would give up waiting, deciding never to contact her again. After fretting and worrying about what might happen, she heard the ‘toot-toot’ of a train announcing its arrival. Her spirits immediately lifted and she was excited again. 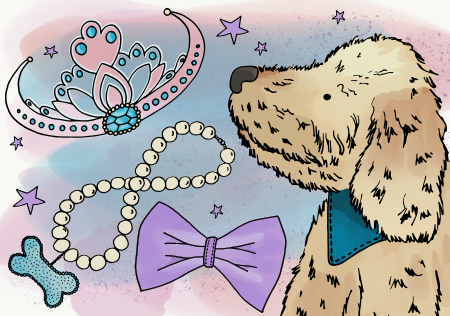 The journey into London was uneventful, she had two seats to herself the whole way. As they pulled into the busy St Pancras station she heard the driver apologise for the cancellation of the earlier train, reminding passengers they were entitled to apply for the ‘delay repay’ scheme. As she trotted to the barrier DeDe muttered she wasn’t fussed about the delay repay, just grateful she’d got to London in time to meet Vladimir.

She’d already decided today was not a day for public transport, today was a special day, and she would definitely be travelling by taxi. Luckily there were plenty with their lights on and she quickly jumped in the nearest one saying, “Take me to the Edgware Road please”.

DeDe had never been to the Edgware Road, and what she saw, wasn’t what she had imagined. Surely this was not the sort of area Vladimir would be familiar with? She was even more surprised when the taxi pulled up outside the Cafe El Chippie. Vladimir had told her it was his favourite lunch time haunt, but it didn’t look at all special to her. She’d imagined linen tablecloths with a harp playing quietly in the corner, but Cafe El Chippie looked like a place that didn’t use linen.

In fact she feared everything might be paper and she feared the cutlery might even be plastic. This must all be a big mistake. Vladimir must have sent her the wrong details.

A first cousin, once removed

Taking a deep breath she opened the door scanning the room for Vladimir. There was nobody looking remotely like the photo, but as she scanned the room for a second time she noticed a rather shabby long haired doodle raise a paw in her direction. Surely this wasn’t Vladimir? How could this possibly be her first cousin once removed?

She pretended not to notice him and looked the other way, but the shabby doodle got up and walked towards her. When they were face to face he said, “DeDe, it is so lovely to meet you, I’m your first cousin once removed, Vladimir”. As they kissed, French style, DeDe smelt a combination of stale coffee, red wine and cigars, which nearly made her choke. She drew herself away, pretending to have a frog in her throat. 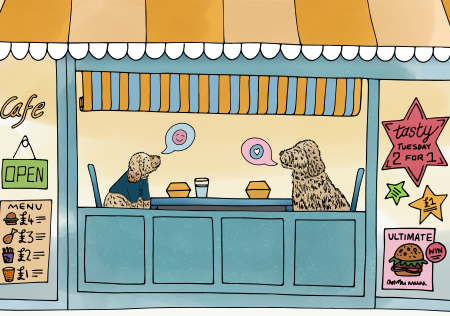 Vladimir ushered her to his table and she took a deep breath before sitting down. Not only was Vladimir nothing like she expected, the café and the menu weren’t either. There was chips with everything, and she couldn’t find the slimmer’s options or anything that wasn’t deep fried and full of calories. “So much for the sautéed duck breasts with wild mushrooms she’d been dreaming of”.

After a few pleasantries Vladimir said he would order from the counter. DeDe dithered before deciding on the cheese burger, even though the menu didn’t say where the beef had been reared, or whether the herd had been organically farmed. At least at the café in Camber she always knew the lamb was from the marsh.

It didn’t take long before Vladimir returned to the table with the dreaded paper napkins and plastic cutlery. “This is all very strange” thought DeDe. “Surely someone who has a castle on the banks of the Volga can do better than this place for lunch?”

While they were waiting for the food, DeDe felt a wave of disappointment flood over her. She’d been so looking forward to a fancy lunch with her aristocratic relative, but the reality of this tatty burger joint in the Edgware Road was a real let down. She’d taken hours getting ready and now her prized jacket would smell of chip fat all the way home.

Pulling herself together and thinking she must make the most of every situation, she started some light conversation. She chatted about her train journey, how she hadn’t been to London for ages, and that Dante’s brother BooBoo lived in Notting Hill.

Feeling she was talking too much about herself DeDe changed the subject by asking if his mother had the same apricot fur as her. Vladimir pretended not to hear, so she returned to talking about herself to avoid any embarrassing silences. At the very moment she broached the subject of family for a second time someone from the counter shouted “Number 138, who ordered number 138?” Without answering her, Vladimir got up to collect their burgers.

DeDe had never eaten burgers out of plastic boxes before, and was a little surprised her food hadn’t been served in a bowl; but as the day was proving to be full of surprises she just flipped off the lid and started to eat.

DeDe was determined to salvage what she could from the situation and find out about her relations. She felt Vladimir was behaving like the politicians who never answer the question on the telly. On the third time of bringing up the subject of family, Vladimir hesitated before taking a deep breath.

“I’ve lost touch with my family due to a misunderstanding, we had a disagreement about money. I borrowed a small fortune from my mother. You see I’d had a reliable tip from my financier to invest in a nightclub on the Baltic Riviera, it was going to be the new ‘In Place’ for fancy doodles. The financier told me the investment couldn’t fail and that I’d be able to return the money without my mother even knowing I’d taken it.

The sad thing was, once I’d sent the cheque I never saw the financier again, he simply disappeared. It turned out there was no planned nightclub, it had all been a scam. To avoid the shame of facing my family I fled to London and have been here for nearly five years.

When I saw your positive vision I remembered my mother telling me about her sister in England. You looked so like her so I imagined you might be her daughter. It’s been difficult to make friends in London and I’ve been so lonely for far too long. I just hoped you’d want to be my friend even if we are not family”.

As Vladimir finished talking DeDe realised her mouth was wide open. Had she heard Vladimir correctly? Might she not be his first cousin once removed? Had Vladimir made up the whole story? How could she even be sure he’d ever lived in a castle?

Her mind was swirling with so many thoughts. How could Vladimir pretend to be her cousin when he couldn’t prove it, and how could she fall for such a trick? As she recovered from the shock DeDe felt ashamed. She remembered how excited she had been to meet Vladimir and how keen she’d been to enjoy the highlife she thought he could give her.

Had her reason for meeting Vladimir simply been based on how much money he had? She felt shallow and embarrassed at how she’d behaved. Perhaps she deserved to be taken in by this trickster?

As they finished their burgers, which really didn’t taste of anything, DeDe realised she wasn’t that disappointed that she didn’t have aristocratic relatives. There is more to life than fancy people with supposedly fancy lifestyles. She now knew she was so lucky to live in Camber with such special doodles who love and care for her.

When it was time to leave DeDe noticed Vladimir fumble for his wallet. She touched him gently saying, “Please Vladimir this lunch is on me. I’ve learnt a valuable lesson today that really money can’t buy”.

Rain, sea, but no water