Episode five: It’s the weekend, whatever that is!

As Dante came in from his early morning sniff around the garden, he heard a voice from his favourite morning radio show say, “It’s going to be a lovely weekend”.

Dante wasn’t sure what a weekend was, but when the news starts with “it’s going to be a lovely” something or other, he always tilts his head and listens carefully. Particularly when he hears words such as lovely, happy, exciting and delicious. These words have a feeling of love, and love is one of his favourite things, along with treats and doodle-dashing of course. After listening a little bit more, he realised that a weekend was probably something like an afternoon or a morning or even perhaps like a birthday!

Dante decided that if it was going to be a lovely weekend, the Camber doodles should do something special. They hadn’t been to see Truffles, Bo Doodley or Woolfie for such a long time, so perhaps, this was the right time to go visit them in Dungeness. Without any discussion with the others Dante made up his mind, today they were going visiting.

After their breakfast had gone down, Dante and DeDe jumped on Billy train. As the doors closed behind them they saw Phoebe sprawled out over two seats. Dante sat opposite her, because there was just no place to squeeze in beside her. DeDe told her it’s bad manners to take up two spaces when she really only needed one. Phoebe took no notice of DeDe’s etiquette lesson and didn’t stir. She couldn’t see that anyone else wanted to sit down, so why should she move? And anyway she was comfy.

None of them could understand why the train was so empty, didn’t everyone know it was going to be a lovely weekend? Where were all the furless two legs they normally saw?

As Billy sped across the marshes, Dante sent a positive thought to Harley and Lily-Poo telling them to come to Dungeness rather than go to the beach as they’d planned the night before. He then sent a second positive thought saying they were going to visit Truffles, Bo Doodley and Woolfie so could one of them pick up some peanut butter treats as a present?

It seemed to take ages and ages for Billy to get to Dungeness, but when he did, they all jumped off together. The beach is covered in pebbles unlike Camber which is all sandy. The pebbles are difficult to walk on, if you have paws, so it can take a little longer to run to the sea. The best thing about Dungeness is the very tall lighthouse with hundreds of steps that take you to the top. When you finally reach the top you can see all the way to Edinburgh in Scotland one way and all the way to Camber the other. It’s the tallest roundest doodle friendly building you’ve ever seen.

As they scampered from the station past the cafe and the fish shop, they caught sight of the lighthouse climbing way up into the sky. From where Dante was standing he said it looked like the very top was kissing the sun. DeDe, who knows a lot of things, corrected him by explaining it wasn’t possible because the lighthouse is only 43 metres high, whereas the sun is 147.1 million kilometres from Dungeness, or anywhere else on earth come to that. DeDe’s scientific knowledge didn’t bother Dante, he still preferred to imagine the lighthouse was kissing the sun, because that made him feel all warm inside.

As they were making their way to the beach, Phoebe began to wonder whether, in all Dante’s excitement to have a lovely weekend, he’d told Truffles and the others that they were coming to visit them. Dante is never good on detail, and sometimes forgets the most important parts of any plan. He simply gets too excited imagining having “such a lovely time” that the arrangements somehow get missed! Did he even know whether Truffles, Bo Doodley and Wollfie were at home?

Phoebe thought it was best to keep her thoughts to herself, particularly as Lily-Poo had had such a long journey from Chislehurst and must be a little tired after getting up so much earlier than the others.

Eventually they arrived at the shore to paddle and stretch their legs. Phoebe was disappointed there weren’t any muddy pools because she’d had a bath the night before and felt she looked far too neat and tidy. After a leisurely paddle and a quick doodle dash they sat in the sun to dry off. Harley also began to wonder where Truffles, Bo Doodley and Woolfie were. Harley doesn’t always like to think, he much prefers to dig, but with all the pebbles it was hard to even start a hole, and that’s why he’d turned to thinking.

Harley knew that Dante had sent a positive thought to him and Lily-Poo, so it was reasonable to think that Dante had also sent one to Truffles, Bo Doodley and Woolfie, so he felt it was reasonable to ask when they would arrive. Sometimes the simple questions are the most difficult ones, and these are the ones Dante often doesn’t know how to answer. He put on his serious expression for a minute and then when he couldn’t think of anything to say, changed the subject to avoid answering. He’d learnt this from the politicians on his favourite morning radio show.

Dante isn’t keen on admitting when he’s made a mistake, it’s not a nice thing for anyone to do. When he thinks he might have made a mistake, he quickly turns his ‘mistake’ into what he planned to do all the time. He thinks the others don’t realise this, but in fact they all do!

To keep everyone excited Dante jumped up and shouted “let’s race to the lighthouse”. As they sped off over the pebbles Harley and DeDe took the lead. They have the longest legs and always out run the others. Harley arrived at the lighthouse first, followed quickly by DeDe, Lily-Poo and Phoebe. Dante was the last because got distracted by a couple of sniffs along the way. 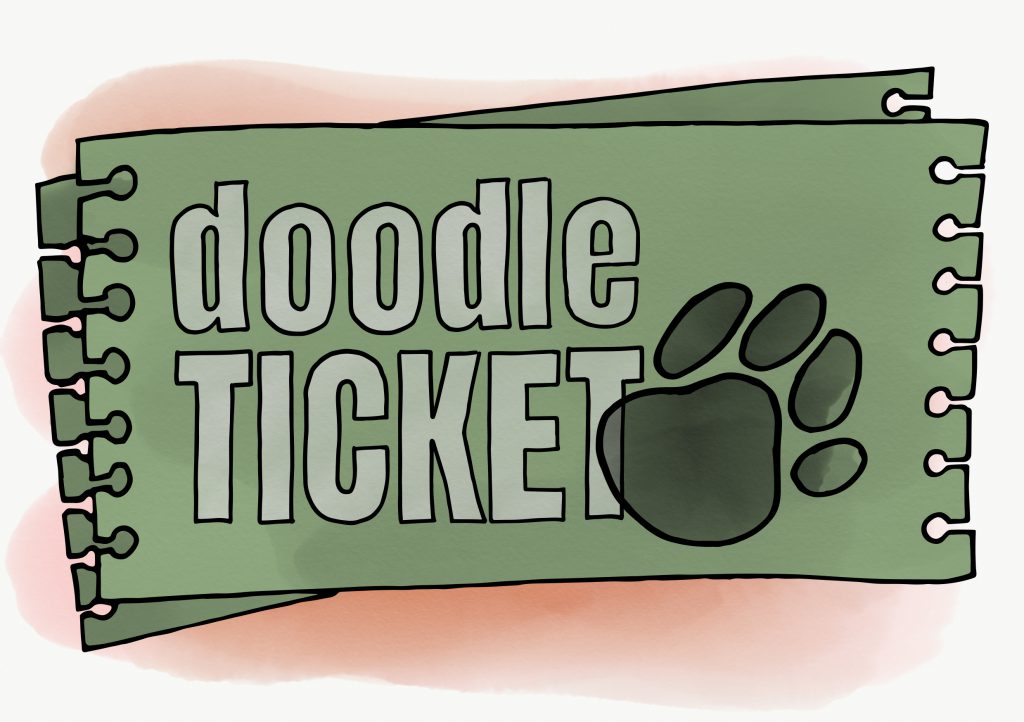 Luckily the lighthouse keeper was there to greet them with a cheerful “Hello” as he collected their ticket money. Lily-Poo noticed that furless two legs are always cheerful when they pop money into their pockets, and wondered why. Was it like burying a bone that you can go back to later? She thought.

Each ticket allowed for one Doodle to climb to the very top and admire the view. Although it was a lovely day outside it was dark and cold inside the tall building, the further they went inside the darker the lighthouse became. Phoebe and Lily-Poo felt a little bit afraid but didn’t want to show it.

As they waited at the bottom step for the lighthouse keeper to give DeDe the last ticket, Dante wondered if his idea to come and visit had been a good one. The steps were so tall and the lighthouse so dark, it all felt a little too scary. Who would start climbing first and how were he and Phoebe, with their little legs, ever going to manage the big steps?

For a second or two they stared at each other and wondered what to do next, then the light from the doorway disappeared and it became even darker. Suddenly a loud familiar “woof” echoed up and around the lighthouse. Before their eyes became used to the half light they could see what looked like a shadow coming towards them. As it moved further into the middle, they saw it was a doodle, and that doodle was Woolfie!

Dante took two sighs of relief, one because his eyes had become used to the half light and the second because he was so pleased to see Woolfie in the doorway! Behind Woolfie came Bo Doodley and Truffles. Now he knew they were going to have a lovely weekend! 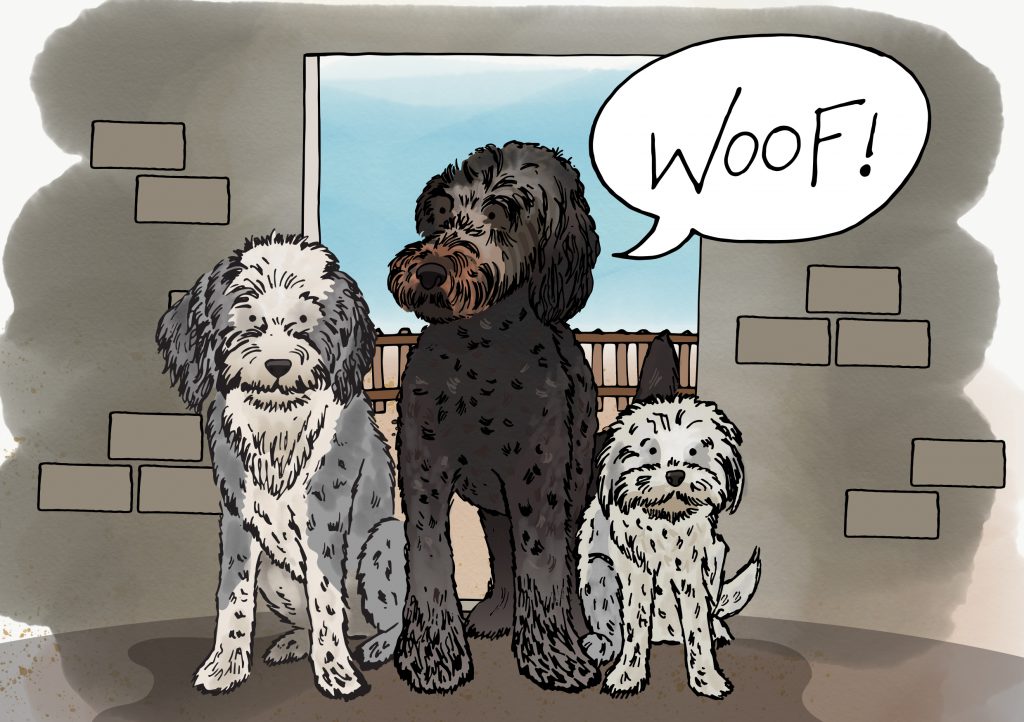