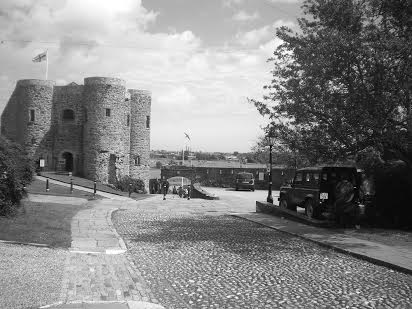 The photograph shows the attractive site of the Dolphin alehouse, formerly situated in the open space opposite Ypres Castle on or near the Gun Garden, Rye from 1710 until 1801. As of yet, no known drawing or sketch of the Dolphin has come to light and we are only informed by brief references to it. The dates and names of Dolphin landlords and landladies are found on Chamberlain’s vouchers issued to the alehouse by Rye Corporation from 1710. In that year landlord Bethyer Hayden was granted the sum of 1s 6d [7½p] for refreshments for “the men that fired the guns” at a celebration in the Gun Garden and 3s 4d [17p] “for beer for the ringers”.

Another licensee George Ogley, landlord from 1739 to 1740, was granted payment “for the bricklayers who drank in the house when at work upon the gaol” ie when repairing the Ypres Castle tower opposite.

Many later voucher payments were “signed” for by landlady Ann Bean (widow, 1753–1766) who was obviously illiterate and simply put an X against her name. The X was then witnessed by someone else as “her mark”. After the 1770s the Dolphin alehouse seems to have fallen out of favour with the Corporation and the issuing of Corporation vouchers went into abeyance.

A document from 1837, records the purchase of: “all that property formerly known by the sign of the Dolphin and the stables, buildings, gardens … on or near the Gun Garden or old churchyard”.  It also included adjoining property “chambers, gardens and premises” belonging to Stephen Gilbert Fryman.

Both documents detail, what was by then, the former Dolphin 36 years after its closure as an alehouse. This is an important point as some local authors have previously misinterpreted the existence of this building as the Dolphin alehouse and not as the building which was formerly the Dolphin alehouse. At least one local author has quoted the building of the extension of Rye Union Workhouse in 1837 as the reason for the closure of the Dolphin Alehouse, and other authors have unfortunately followed suit. However, this was not the case. The Dolphin closed for reasons unknown in 1801. The workhouse was extended in 1837.

The Dolphin is said to be named after a privateer of 35 tons usually at berth in Rye Harbour. Thomas Pierce, mariner of Rye, was the master in the 1740s and a customer of the Dolphin alehouse.

However the Dictionary of Pub Names by Dunkling and Wright informs us that the name Dolphin is a common one for public houses by the sea. The name comes from a seafaring, Neptunian legend; a piece of fishing mythology which states that in days gone by dolphins were thought of as fishermen friendly animals. It was commonly believed that they wound themselves around a boat’s anchor cable thus stopping the cable from dragging, and giving the boat extra stability.

The Dolphin alehouse formerly of the Gun Garden, should not be confused with another, second licensed premises also called the Dolphin, located in the Mint from 1826 to 1865. In the latter year this licensed premises changed its name to become the Foresters Arms.

A German traveller in Rye once noted: “The English are vastly fond of noises that fill the air such as the firing of canon, beating of drums and ringing of bells, so that it is common for a number of them to go up into some belfry and ring bells for hours together for the sake of exercise.”