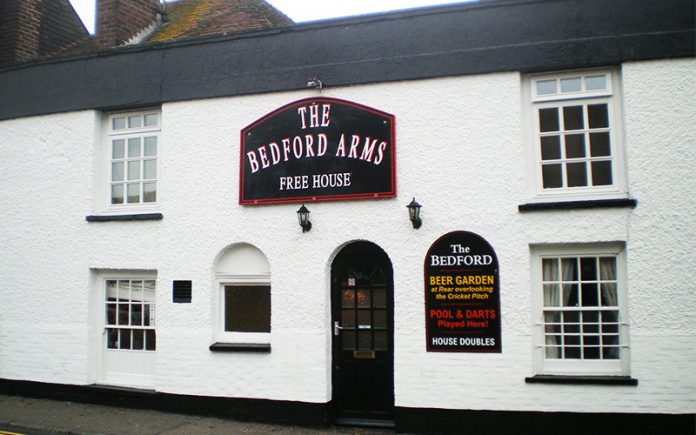 For this latest glimpse into the social history of our local public houses, I’ve edited this wonderful report that appeared in the Rye Chronicle of October 1870:

The day’s labour is done and the hopper sets forth in search of amusement. With dirt thick upon him, away he trudges to the nearest public house. In some instances he is accompanied by a female companion. We arrive at the Bedford Arms and my ears tell me that several of the fraternity are before us. We enter the tap room which is already filled with smoke.

We take a place at one of the tables and await events. Half an-hour later in come the women and children. I am among a strange crew, but I fraternise with my associates. I get behind a clay pipe and puff my tobacco. I purchase the friendship of one or two in my immediate vicinity by “standing” a jug or two of beer.

I have time to study the characters of my new friends. What capacious stomachs they have, with what extraordinary facility the beer disappears! We are packed close and noisy. The door opens, and in tumbles an addition to the party, who is at once greeted with “Hallo, Frenchey”, “Here’s Frenchey”, “Frenchey, my tulip, tip us your fins”.

It is evident at a glance that Frenchey has been imbibing somewhat freely. Curious to know why he attracts so much attention, I go and sit beside him. I discover that he is a foreigner. I muster up my small stock of French and try a conversation. Frenchey turns out to be a German. I declare the fact; the hoppers are amazed and express their wonderment. I invite my foreign friend to drink with me. He accepts and for the remainder of the evening I am addressed by him as mon officier — for Frenchey knows a little French and I know no German.

I turn the conversation to the war [the Franco-Prussian War: 1870]. I ask him why he does not take up arms amongst the brethren of his nation. He tells me he prefers the more peaceful occupation of hop picking in England. I ask Frenchey to oblige me with a song in German. He agrees conditionally, that I give one in French. Cries of “Horder for the good gentleman’s song”, and rattling thumps of approval with pots on the table are made. Frenchey sings the Watch on the Rhine, and I shout the Marseillaise.

The hoppers are astonished, and Frenchey is a greater hero than ever. I ask a young fellow near me why Frenchey excites so much interest. He tells me, “Well, look ´ere, he haint in his own country and don’t know so much about things as we do; and if we was in his country we should like someone to help us, shouldn’t we, sir?” I answer that the feeling does the hoppers great credit, and am then further informed that Frenchey has just lost the whole of his tallies for his week’s labour, amounting to some nine dozen bushels, and that they are about to make a subscription for him. My informant has already advanced him 1s 6d.

“Hi lent yon 18 pence, didn’t I, Frenchey?” Frenchey acknowledges the indebtedness. Everybody is talking at the pitch of his voice but there are few listeners. Here is the true Hibernian ring, there the Cockney twang. We are all shouting.

Suddenly there comes another loud rattling of pots on the tables, and “Horder? Horder for a song”, is called out from one corner. We have more songs, everyone sings. The music and the words are not always the choicest, but the execution is in keeping with the general composition — Herin’s love-ly ´ome, The dauntless faymale, The Convict of the Isle of France. One song finds especial favour, it bears the euphonious title of Johnny, I hardly knew yer, and has somewhat of the air of When Johnny Comes Marching Home.