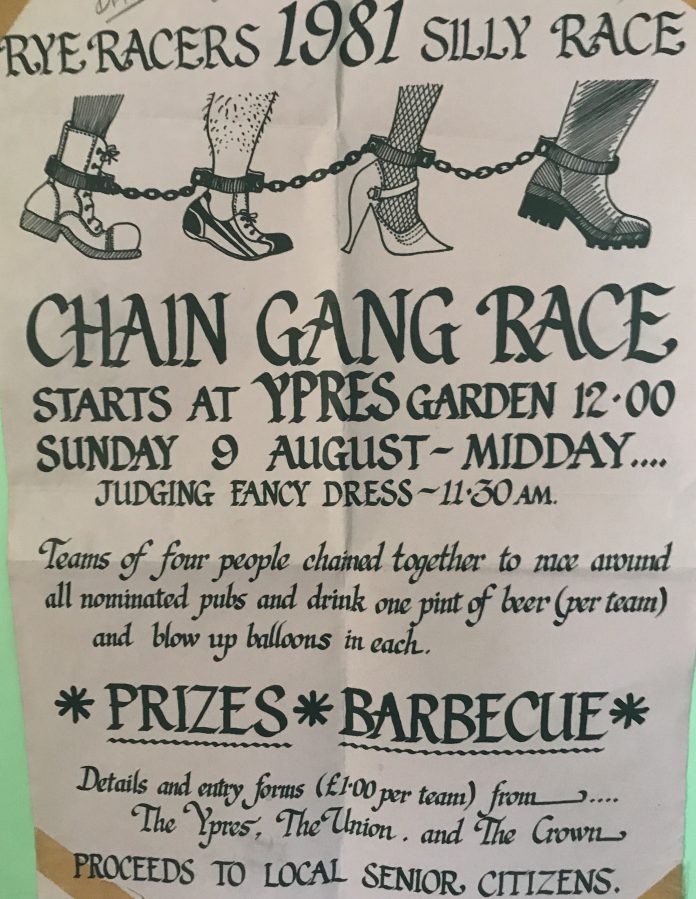 [Editor’s note : In this third venture into Rye’s past history of  silly racing there are no ancient photos of these events – but you will find them in the two earlier articles].

In 1979 the silly race was a hobby horse with four in a team with alternative team members facing the front and the back of the hobby horse. And, as well as consuming a drink at each pit stop, they had to blow up a balloon and, if they arrived at the finish without all the balloons, they were deducted one minute from their race time for each missing balloon.

The race started from the garden at the back of the Cinque Ports at 6pm on a Saturday with the costumes being judged by a reporter from Southern TV. Percy Sherwood, the Town Crier started the race with his bell and a lot of teams found it difficult to go in a straight line with a number racing sideways.

The teams included one dressed as four nuns, and another as a dragon, and after the race there was a disco. The race was won by a team dressed as chefs called “Spoil the Broth”.

In 1980 the silly race was called “Wazel Gummige” and the race started from the Ypres garden at noon on a Sunday. There were teams of two attached to each other by a pole across their shoulders, usually a broom stick, with one arm each being tied to the pole.

The fancy dress theme was mainly “scarecrows” and sixteen teams raced around the town with most of the team completing the race in a hour  – with just a few, who did not want to rush drinking the beer, taking longer.

The winning was Durrant House restaurant and all the teams enjoyed a barbeque after the race.

In 1981 there was a Chain Gang Race (see top pic) and eighteen teams of four people chained together around the ankle raced around Rye stopping at seventeen pubs to consume a drink and blow up a balloon.

Miss Rye (the 1981 carnival queen) judged the fancy dress and presented the prizes at a barbeque in the Ypres garden on a Sunday afternoon in August.

A team dressed as a caterpillar won the race in forty eight minutes, five minutes quicker than the second and third teams. The first all ladies team to finish came from the Crown pub.