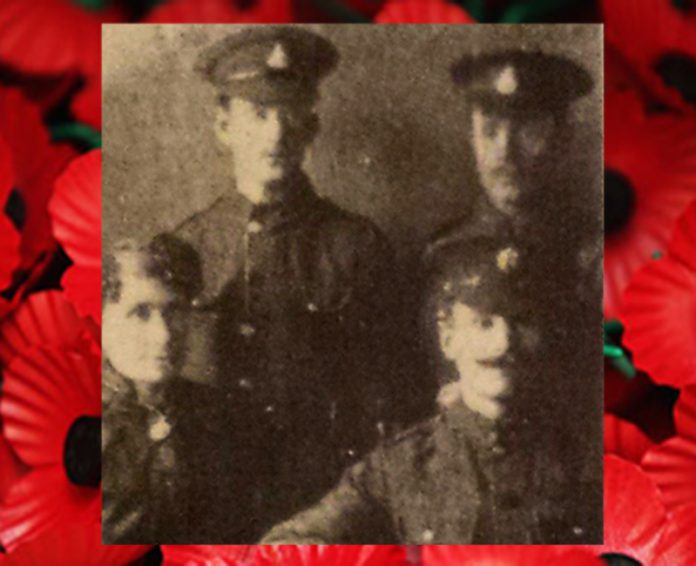 Three Rye men pose with their mother Louise Elliott in the photo above. By October 1918 the last of the three brothers pictured – George, a former bricklayer – was to die from his wounds in World War 1.

“All three lie buried in France.  All three are on the Rye Memorial,” said Colonel Anthony Kimber, president of the Rye and District Branch of the Royal British Legion, who supplied the photograph. The lives and the sacrifice of the three men and the heartache of their mother will be recalled this Remembrance Sunday and on Armistice Day November 11 next week.

The Rye branch of the Legion has created a roll of honour that lists those people from Rye who died on active service, including both world wars and more recent conflicts. The project began with information from the Commonwealth War Graves Commission and other internet search engines in the public domain. Local historian Kevin Regan and Colonel Kimber have contributed hours of research to the project.

As well as recording details of each person’s death, there is information on where and when they were born, their rank and often a complete service history, as well as information about the deceased’s families and other details gleaned from past censuses. The roll is a work in progress, with information being added as it comes to light. Currently it is an already impressive 197pp long and is a useful website resource for anyone researching their family history. In some cases, mystery survives. There is, for example, no reason that has, as yet, been unearthed to explain why a Percy Allen from Leigh-on-Sea is named on the Brede war memorial.

Follow this link to see the Rye Roll of Honour.

10.30: Parade of Service, civil and youth organisations assembles outside the town hall where mayor Bernadine Fiddimore will take the salute;

10.50: service participants should be in St Mary’s church;

Following the service there will be a short ceremony at the Rye War Memorial to include a silence, the calling of the names of the fallen and the laying of wreaths and crosses.