This is the first in a planned occasional series of “longer read” articles. More in depth than many of our other items. We hope you enjoy it.

Ever since David Attenborough highlighted the issue of ocean plastics in the fabled series Planet Earth 2, we have become perhaps too familiar with images and reports of what happens when they enter the ecosystem. Many interesting and innovative organisations are rising to the challenge, and policies to stymie the flow have slowly crept up political agendas.

Yet, despite the awakening, there is more of the stuff blowing in the wind then ever. As I make my way to Rye along the number 2 cycle route, it is now not unusual to see flecks of detritus amongst growing crops. Reports of washed up whales found to have balls of fishing nets in their stomach are becoming more common, and Camber beach after a busy summer’s day is peppered with litter. A lot of this is blown over the road and comes to rest on the north bank behind Broomhill car park.

We’ve been talking about plastic pollution for many years, so why are things still not improving?

One source of plastics that we can all relate to is supermarkets. Ever since their inception they and the brands they sell have increasingly looked to plastic as a cheap and reliable way to wrap up our food. It’s efficient to use, is good at preserving produce, and it makes products more appealing to consumers.

Shelves stocking up with more

As our consumer habitats have changed from small and local, to big and beyond, our reliance on supermarkets has driven some startling statistics on packaging. According to Greenpeace research supermarkets put over 900,000 tonnes of plastic on their shelves in 2019. Furthermore, with 7 out of the 10 major supermarket failing to reduce their plastic output the figure is growing.

Waste management strategies have failed to prepare for these figures, leading to underdeveloped infrastructures that are unable to process such sums of material. According to The Guardian newspaper, the UK’s recycling rate for household waste is just 42%, well below the EU average of 47%. The rest ends up in landfill; being exported and dumped in other countries; and in our soils and oceans.

For some time pressure groups and campaigners have been calling on the government to set legally binding targets forcing supermarkets to reduce their plastic footprints, including the implementation of a “polluters pay” principle. This would force outlets to pay for the costs of recycling their packaging, and therefore encourage them to reduce plastic use. So far no such legally binding targets have been ratified.

The adoption of the deposit return scheme (DRS) is seen by many as symbolic of a wider transition to greener policies by the food industry. It works by increasing the cost of bottled beverages and remunerating individuals for returning them to special recycling bins. Encouragingly the scheme has shown to increase recycling rates in other countries. Zero Waste Europe reported that in Germany 98.5% of refillable bottles were returned to collection points after the scheme was rolled out.

Yet DRS collection points have yet to hit our supermarkets. Evidence found by Unearthed, Greenpeace’s investigative arm, found that big brands like Coca Cola have been lobbying governments for the scheme to be revoked.

Reports obtained under the Freedom of Information act found that in 2015 the lobbying group Packaging Recycling Group Scotland (PRGS), which includes Coca Cola as a stakeholder, argued against a roll out, citing that the DRS would cause expense and inconvenience to consumers, damage business and existing recycling and anti-littering initiatives. Further research by Reloop, a circular economy organisation found these claims to be false.

“The tactics used around the world by big business opponents of deposit systems are very familiar by now. They are always determined not to take responsibility for the litter the current approach generates, but they cloak this in concern for small businesses and local taxpayers, despite the evidence that both do very well out of such systems.” Clarissa Morawski, managing director of Reloop.

Greater hopes have been pinned on the all encompassing Environment Bill. The brainchild of the former environment secretary Michael Gove, the executive summary is set out on the government website as follows.

Changes held up by Covid

“A Bill to make provision about targets, plans and policies for improving the natural environment; for statements and reports about environmental protection; for the Office for Environmental Protection; about waste and resource efficiency; about air quality; for the recall of products that fail to meet environmental standards; about water; about nature and biodiversity; for conservation covenants; about the regulation of chemicals; and for connected purposes”

The bill’s progression has been eagerly observed by conservation charities and pressure groups as hailing a new dawn for conservation and sustainability. Again, its implementation has been delayed for years, the government citing Covid-19 as the latest reason.

Positive political steps have been made. Plastic straws and cotton buds have been banned, and the government intends to levy a tax on all packaging with less then 30% recycled plastic in by 2022. But this falls well short of the comprehensive law making needed.

So if the supermarkets are a big part of the problem, what are they doing about it? They often shout about their own targets to reduce their plastic footprint. Sainsbury’s proclaimed in 2018 that it was going to cut its plastic use by 50% by 2020. This looks set to fail, as they had only achieved a 1% decrease for 2019. Both Waitrose and Tesco have actually increased the amount of branded and non branded packaging in their stores, and Jempson’s have yet to publish any such targets on their website.

Things are changing though. Supermarkets are stripping unnecessary plastic from their fruit and vegetables. Waitrose has introduced optics as a packaging free method of dispensing pasta and grains. Some brands are allocating plastic free stores as pilot schemes to see how consumers will respond to the idea. Supermarkets are listening and appear to be doing something about it, though one could be forgiven for thinking that it is little more than PR with a glance down any shopping aisle.

Each year Greenpeace publish a supermarket scorecard, helping to give some clarity to the picture. They rank supermarkets from 1 to 10 based on their commitment to recycling and reducing plastic use. Where does your supermarket sit? Take a look here.

A problem left to local people

With no assertive legislation coming from Westminster, and only tentative steps from major polluters, this is an issue that is being left to community organisations, campaign groups and the small minority of litter pickers.

I recently spoke with Andy Dinsdale who founded the non profit organisation Strandliners in 2012. They survey plastic pollution through identification, and record the data for organisations including the Marine Conservation Society, Surfers Against Sewage and Break Free From Plastic.

Andy tells me that by identifying both the quantity and source of plastic in the environment the aim is to push for effective legislation to ultimately mitigate the problem. So how can individuals get involved?

One initiative, called Bottles From… invites all who pick up litter to identify source of drinking bottles and cans  – by material (plastic, metal or glass), size (large is 750ml and over, small is under 750ml) and brand (if any)– and submit the findings to bottlesfrom@gmail.com. “This will help us develop a local picture of drinking containers found as waste along beaches and rivers. Drinking containers that have a value and should be returned and/or recycled”, Andy tells me.

Interestingly, Andy has noticed that the amount of litter on the beaches has reduced in recent years, this due to an increase in litter picking rather than a reduction of the production of plastics. “We need to capitalise on this by encouraging individuals to submit their findings. The more data we have, the stronger the case will be for the legislation of proven schemes like the DRS.”

Other ways to get involved include registering on the Strandliners website as a volunteer and joining the team on survey sessions (they clear up rubbish too), training in plastic pollution identification and sources and citizen science surveying. Everyone who joins in helps the fight against plastic pollution in our environment, as well as enjoying a sociable day out in the countryside. 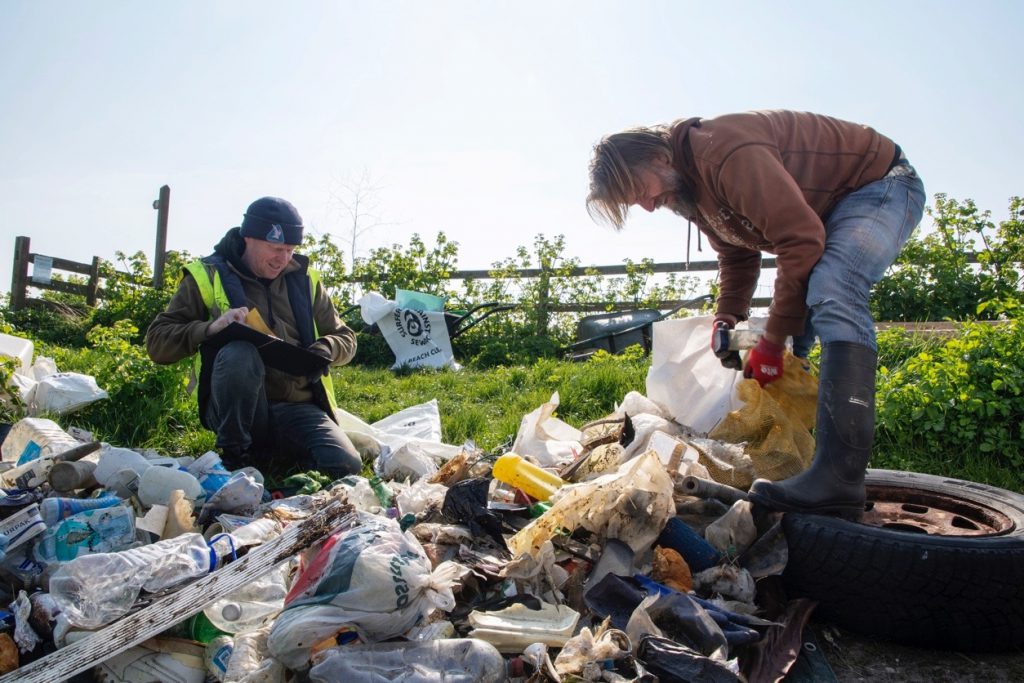 You may see them collecting the rubbish that has washed up onto the banks of the River Rother this April. They aim to sort, identify and record it all, so that evidence can be gained to use locally and reduce the pollution at source.

If you feel frustrated with the lack of political progress then contact the local MP Sally-Ann Hart – sallyann.hart.mp@parliament.uk. You can urge her to press the government to form legally binding targets forcing supermarkets to reduce their plastic use, and for the roll out of the long awaited DRS scheme.

Asking Andy what he thinks is the resolution: “We all can do our own ‘little bit’ within our own means, but to stop plastic pollution at source we need to get out, identify and record so that we can lobby locally, nationally and internationally for change.”

As someone once told me when discussing plastics in the environment: “If your bath overflows, you don’t bail the water out of the window; you turn off the tap.”