New year’s day 2022 was, after several days of rain and drab weather, a beautiful day, perfect for a cycle ride to Rye Harbour village. While one would expect more traffic than in the week, I did not expect the chaos that I came across half way down the cycle path from Rye. Cars were parked facing backwards and forwards on the right side of the road right up into the village. This was always the residents’ nightmare until they took over the car park.

The problem seemed to be a large dug-out ditch outside the first few houses which people tried to get round, but cars were coming from the village to get to Rye so a blockage built up there which created chaos right to and from the car park around the corner where the toilets are, eventually creating a queue both ways. This must have been going on for some time as I arrived around 1pm and on returning around 3pm it was no different. In fact I had to walk for quite a bit as cars were trying to get past each other driving on part of the cycle path. One woman was getting very upset as she was trying to get to her caravan and was caught in the traffic build up. 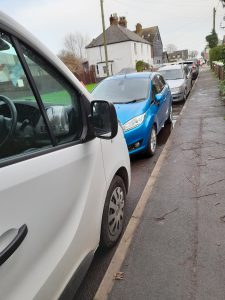 Was it that the car park was full? Probably. Was it the work area? Yes, and of course visitors wanting to go to the beach and the discovery centre. It seemed such chaos that it felt worth checking the Rye Harbour website.

That showed there might have been a fourth reason: “Winter Activity Trail 1.1.22, 10 until 4”, advertised with a map available around the reserve to find out about nature, wildlife and pointing out the available car park.

This was made possible through the Sussex Wildlife Trust / National Lottery. There are several other events happening, one took place on January 2, a walk with the warden on January 9 and many more in later months. After walking for a while through the myriad of cars, cyclists could peacefully continue on the path to get back to Rye.

PS: Being curious I checked out the situation later, on January 2, and all was well, no chaos.