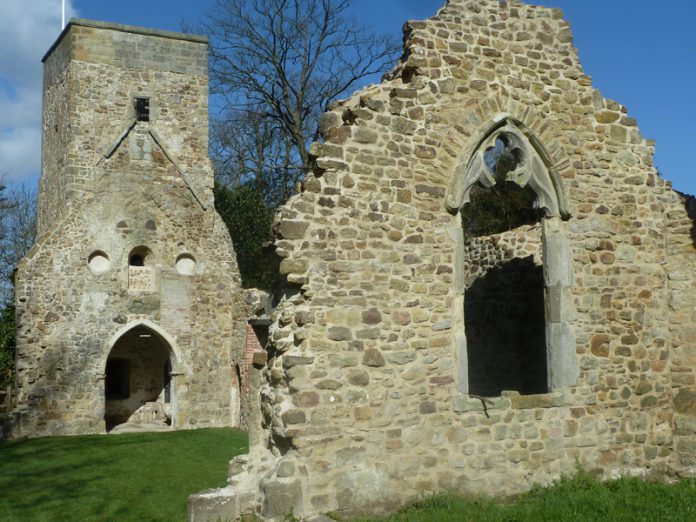 As you approach Old St Helen’s, you notice, first of all, the tower still standing, and the remains of the nave wall and east end surrounded on three sides by tombstones. The sense of history follows immediately, and the beautiful setting and the quietness reinforces the feeling that this ancient monument must be preserved for future generations.

I first became acquainted with St Helen’s on being appointed a trustee of the Sussex Heritage Trust about six years ago. The trust has owned the building for nearly twenty years, but after the great storm of 1987 it became apparent that major conservation effort was required. The death of Ralph Wood, a trustee, set the project back for several years until Victoria Williams and I formed the new team to prepare a bid for the Heritage Lottery Fund. Victoria is Project Officer for Great Dixter and formerly the Curator of Hastings Museum.

We achieved success with Round 1 funding in 2010 and Round 2 in June this year, with the whole-hearted support of local amenity organisations such as the Hastings Area Archaeological Group, the History Group, the Friary Gardeners, and we also won the backing of Hastings Borough Council, which has agreed to take over the ownership of the church when the project is completed. No less important was the encouragement and support we received from Paul Roberts, Inspector of Ancient Monuments for English Heritage, and Casper Johnson, East Sussex County Archaeologist.

The historical and archaeological significance of church and graveyard has long been recognised. St Helen’s church lies close to the Ridge, a pre-historic track-way, and has stood on the site for nearly a thousand years. It is believed to be the oldest surviving building in Hastings, pre-dating the Norman Castle. It is possible that an earlier church existed on the site, with the dedication to St Helen and a nearby holy well being typically Saxon, but there is no clear evidence for this. The earliest manuscript reference comes in the Ecclesiastical Valuation of England and Wales in 1291, made under the authority of Pope Nicholas IV; this states that the annual income of the Church of Ore did not then exceed 8 marks.

The earliest extant parts of the church are a round-headed window in the north wall of the nave and the early Norman west front embedded in the late C12th tower. The north wall of the chancel dates from the C13th and includes two lancet windows with an elaborate tomb beneath. The east wall and window are C14th. Test pits dug in January 2011 revealed an early C19th vault and two lead coffins under the nave, as well as fragments of marble and roof tiles.

A good short history of the church has been written by Canon F Bullock (A History of the Parish Church of St Helen, Ore, Sussex 1951), available in Hastings library. He tells how in the early C19th, the south aisle was added to accommodate the influx of fashionable worshippers, visiting Hastings, a short walk away across the fields. Indeed, the services were so popular and the church so cramped and ‘inconvenient’ that it was decided to partly demolish the building and to build the new St Helen’s Church close by (Architects: Habershon & Brock 1869). Historical memorials were moved to the new church, including a C15th brass. Other artefacts were stored in Hastings Museum, including the tombstone of Henry of Ore dating from the 1330s, mediaeval floor tiles and the cast iron gates that marked the eastern entrance to the churchyard.

The churchyard itself is a repository of archaeological value, having lain undisturbed for over 100 years. It contains around 80 tombs from the C17th, C18th and early C19th ranging from chest tombs to partially buried slabs. The C17th and C18th tombstones have never been subjected to re-positioning and removal as elsewhere. One memorial is to General James Murray, Governor of Quebec between 1760-1768. He married a Cordelia Collier of Hastings and died at Battle in 1794.

The church’s mediaeval setting comprised manor house and farm. Over time, the Jacobean manor house gave way to the Victorian Ore Place, which served in its time as a Jesuit Seminary – Teilhard de Chardin, scientist and theologian, its most famous student – and later as an Army Record Office, before being demolished to make way for a modern residential housing estate.

The over-riding priority is the conservation of the ruin itself. The plan called for the removal of ivy, which had infested the walls of nave and chancel, and the meticulous repointing and re-instatement of the existing structure. Interestingly, the English Heritage policy has changed in recent years, so that where fallen stone fragments can be proven to have come from a certain place, they can be re-constructed, for example a stone window mullion re-built.

It is also planned to extend the tower stone staircase, which currently reaches only to first floor level. A new steel staircase will be installed to allow limited public access to the top of the tower from which outstanding views can be had across Hastings to the sea and towards Eastbourne. This new internal structure will also facilitate routine maintenance of the outside of the tower. Externally, a new pathway will approach the ruin from the road, providing an easy gradient suitable for wheelchair access, besides opening up the vista from the re-installed Victorian gates.

Archaeological research will include study and interpretation of the standing structure to cast further light upon the methods and phases of construction, and a community dig using HAARG volunteers under our professional archaeologist will examine the church floor and the area north of the nave. The recording of gravestones and memorials will be updated in electronic form, and historical data further assembled.

Early next year, community ecology projects will commence. These include the creation of a wild flower meadow, the recording of species of plant and animal life, and the fixing of bat or swift boxes. An educational programme will be undertaken in conjunction with local schools and the whole area will become a focal point of local historical interest.

The project was completed in early 2013 at a total cost of some £500,000, funded principally by the Heritage Lottery Fund, with contributions from English Heritage and the Sussex Heritage Trust’s own fund-raising efforts. The Scheduled Monument was duly removed from the English Heritage ‘At Risk’ Register, and the ruin and its churchyard safeguarded for the enjoyment of future generations. Future care and maintenance are  in the hands of Hastings Borough Council, which already owns the adjacent wood and parkland as part of the newly-designated Conservation Area.  A friends group had been formed to care for the churchyard in conjunction with the nearby Friary Gardeners, a charity run by the Parchment Trust.

Kenneth Bird is a trustee of Sussex Heritage Trust