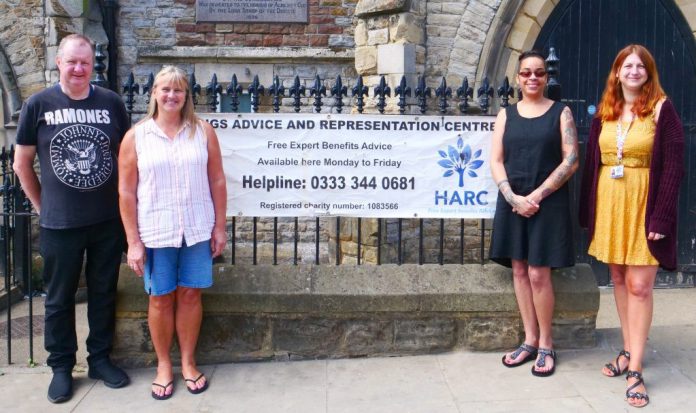 The Little Cheyne Court Wind Farm Fund (LCCWF) supports charities and community groups who operate within a ten-kilometre radius of their wind farm on the Romney Marsh. Grants of between £500 and £5,000 are given to support environmental, educational, community and charitable activities. The fund was established in 2000 and made its first grants the same year. In total, the fund has given 191 grants totalling nearly £480,000. The information below has been taken directly from the monitoring reports of these groups.

Projects that received funding include:

HARC will also deliver training aimed at upskilling organisations and frontline staff. The advisor can signpost to a number of support services when the various issues have been identified.

The work funded has directly benefited 190 people or 105 individual households. HARC has relieved poverty for some of the most geographically and socially isolated residents of East Sussex. So far, they have raised a verified £54,222 in increased or previously unclaimed welfare benefits for these individuals. Furthermore, they have provided 26 training sessions aimed at up-skilling a total of 117 frontline workers.

Real lives
After a tumultuous and difficult year for local artists, national performers and freelance event professionals, they needed employment, networking and develop opportunities for the arts and cultural sector.

As part of Puddings and Pathway festival, linked to the 1066 Country Walk regeneration, the wider project which was funded has helped artists including designers, a sculptor, street theatre performers, event producers and project managers. The Pudding and Pathway festival, together with a renowned theatre group, Inside Out Theatre, visited Rye and had fun outdoor performances. The audience in the Kino forecourt, as well as staff, gave favourable feedback. There was much laughter and the Kino said they would like them to return.

Pudding and Pathway hope to incorporate a similar outreach programme with disadvantaged children in Rye and give them an opportunity to create a short piece of street theatre as part of the festival.

Music Well
Another activity funded by the grant was from the Music Well, which provides music therapy in schools and the community to adults, young people and children. The grant supported the expansion of their work around Rye, as they have been unable to conduct fund raising events, owing to the pandemic but have been providing valuable work to clients online. The Music Well also supports a singing group which many of the beneficiaries described as a lifeline during lockdown.

Pett Level Preservation Trust’s (PLPT)
PLPT helped to preserve 24 acres of land at Pett Level for the public amenity and the preservation of wildlife. Part of PLPT land is within the Hastings to Pett Level site of special scientific interest. The grant was used to increase roosting opportunities through the purchase of a variety of bat boxes, and to create awareness among local residents and visitors of the importance of caring for green spaces and its wildlife.

LCCWF funded many other projects in Rye, Camber, and Peasmarsh. They also fund projects in Kent. Anyone who would like more information or to get an application form for their project please go to: sussexgiving.org.uk.