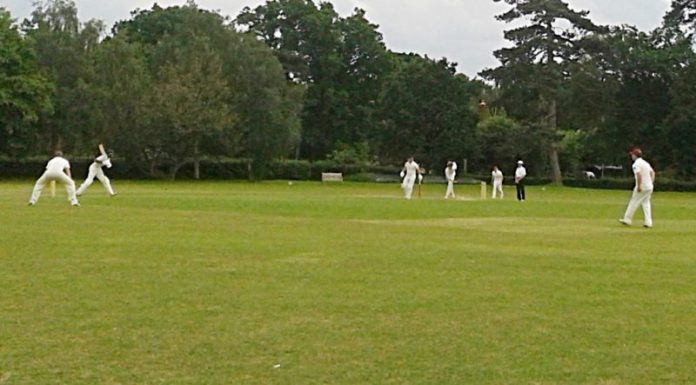 Rye slipped to only their second defeat of the season on Saturday, July 16 at home to Stirlands in a match sponsored by My Sweet Old Etcetera. Rye skipper James Hamilton won the toss and elected to bat on what looked like a flat wicket.

Rye openers Dan Seabrook and Hamilton worked hard in the opening overs against the new ball before Seabrook (6) was dismissed by overseas player Ajinkya Deshpande to leave Rye 20 for 1. 20 for 1 then became 23 for 2 as overseas player Hugo Nel (2) nicked behind to the keeper off the bowling of Dan Mugford (1 for 20). Fin Thomson (4) then came and went, as he became the second wicket to fall to Deshpande to leave Rye on 36 for 3.

George Wathen then joined Hamilton and the pair worked hard to repair the damage in attempt to move the score forward. All was going to plan before Hamilton became Deshpande’s third victim falling to an excellent catch in the gully for a well made 32 leaving Rye teetering at 64 for 4. What followed was a rapid procession of wickets to Deshpande who had spent the winter as part of the Royal Challengers Bangalore development squad in the IPL. His class was too much for the Rye line up as he ripped the heart out of the lower middle order.

When Wathen (24) was ninth man out with the score on 86 any hopes Rye had of posting a competitive total were lost despite some impressive hitting from Toby Farrow (10). Eventually Rye were dismissed for 102 inside 37 overs with Deshpande picking up impressive figures of 8 for 63 from 18 overs.

With such a low total it was unlikely that Rye had any conceivable chance of victory. However, Harry Smeed 2 for 33 and Tobias Farrow 1 for 11 provided Rye with some hope claiming the scalps of Wilkinson-Beale (32), Briance (0) and Coles (6). However, William Gubbins 46 not out steadied the ship and guided Stirlands to a maximum 30 points.

This loss means that Rye drop to third in the table with Stirlands leapfrogging them into second place, albeit with a slender 6-point lead. Rye will be back on the road on Saturday as they travel to West Chiltington and Thakeham with the hope of putting their promotion push back on the rails.

This season has been very much a developmental season for Rye 2nds as the club prepares its youngsters for the transition from Colts to Adult cricket. Last Saturday was a tough lesson, but the team emerged with credit from their performance in challenging circumstances.
Rye won the toss, for only the second time this season, and that was against the same opponents, when they lost by 4 runs at home. So on Saturday Rye bowled first against a very experienced Ansty team, who went off with a flying start, as the inexperienced opening attack of 17 year old Ollie Rhys Jones and 16 year old Tom Gasson were battered. Ansty raced to 117 opening partnership as Barnes hit 73 and Wilson 53. Green with 41 then containued the attack, but from here Rye’s resilience paid off as 16 year old James Smeed took 4-60 and Martin Blincow 2-33, and a returning Tom Gasson 2-54. Finally Ansty declared on 257-9 off 41.4 overs.

After tea, Rye discovered that the Ansty opening bowler Palser, unable to play for the 1sts, struck 3 early blows, inflicting a broken toe nail and damaged forearm, as well as 3 bowled victims. But Rye struck back from 13-3 as Spencer Fielding hit 28. Then 13 year old Luke Payton making his County League debut, and after a fine catch in the field, hit 19 and with Ollie Rhys Jones 38, shared a 34 run partnership. Rye continued to bat on and acquire points, and were finally dismissed for 151 in the 39th over.
This was a solid performance from the youngsters, and provides them with valuable learning, to store away for the future.

Rye third team visited Hailsham fourths for their latest East Sussex division 12 fixture and on winning the toss elected to field first. Hailsham got off to a good start as openers Jason Head (77) and Tom Carpenter (25) looked to find the boundary punishing any wayward bowling and increasing the score rapidly. Callum Haddaway playing his first adult match made the breakthrough and finished with figures of 1-22. Mike Stoneham dismissed opener Head on his way to bowling figures of 3-64. Ole Jorgensen bowled consistently well to finish with figures of 3-57 including Manoj Yogendran (35). Tony Goodsell (1-20) was the other Rye wicket taker as Hailsham declared with one over to spare.

This Saturday the 1st XI make the long trip to West Chiltington, the 2nds host Haywards Heath 2nd XI and the 3rds at present have no fixture as Lewes St. Michaels 3rds have withdrawn from the League.

Last week the U17s played Boughton and were in a strong position with 100-3 off 16 overs when the game was washed out. On Thursday the U13s defeated Boughton who they restricted to 54-8 off 20 overs, using 10 bowlers. Then they reached the target 1 down in the 8th over as Luke Payton hit 32 not out. The U15s lost to Ashford Town, in a close fought game. Ashford hit 153-7 off 20 0vers, and Rye replied with 135-3 thanks to Luke Payton 53 retired. The U11s lost to Tenterden U11s.

Next week is the final one of the Ashford League, as the U13s play Egerton on Thursday, where victory should mean Rye retain the League Winners mantle, the U11s travel to Kennington on Monday, and the U17s play Willesborough home and away on the next two Fridays.

Helping hand or an arm and a leg?

Straight in at number one!