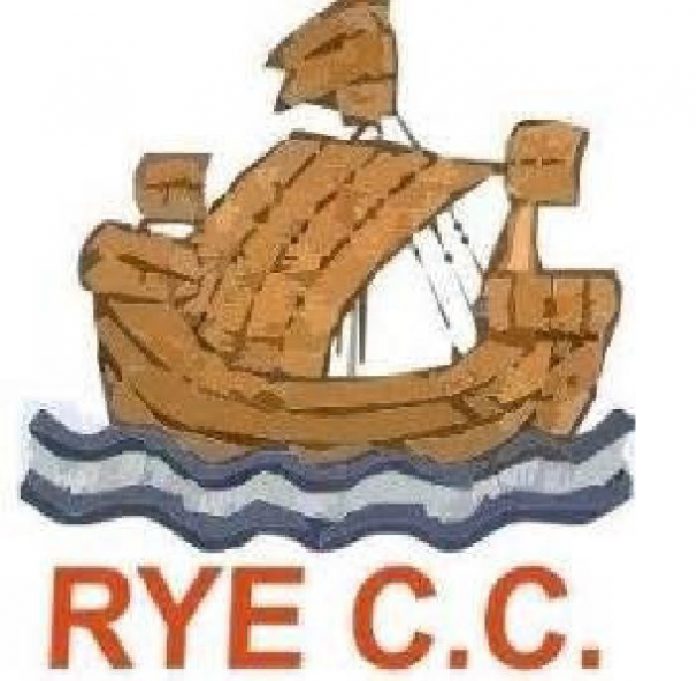 Rye, looking to stay top of the league, played host to Buxted Park last weekend, July 22, in a match sponsored by My Sweet Old Etcetera

Skipper Gary Willis again lost the toss and Rye were asked to bat. In-form batsman George Wathen was lost early for 0 but Sandun Dias (39) scored freely. James Hamilton came and went quickly and Rye were stuttering at 19 for two but Harry Smeed (64) batted patiently alongside Dias and they began to rebuild until Dias fell. With the score on 77, Dan Seabrook (18) together with Smeed took the score to 108, but then quick wickets were lost as Rye slumped to 136-6. However, Tommy Nunn (33) and Tobias Farrow (35 not out) pushed the score up to 200 to ensure maximum batting bonus points before the team were all out for 209.

Rye knew they needed quick wickets to try to bowl Buxted out before the expected rain. Craig Pierce (three for 13) got Rye off to a great start, taking three quick wickets and reducing Buxted to 11 for three. Smeed was introduced and he struck in his first over reducing Buxted to 23 for four. Pretorius offered some resistance scoring 27 but when Smeed claimed his wicket, Buxted collapsed thanks to Wathen, who claimed four for 4 and Smeed, three for 30. The visitors were all out for 75 and Rye claimed another win to stay top of the league.

Rye 2nds travelled all the way to Burgess Hill, and despite a gloomy forecast, travelled in hope. Once again they lost the toss and were invited to bat. There were only 22 overs possible before the heavens opened and washed away the game. By this time Rye had gone to 122 for two thanks to Claremont Senior School student Sachin Jha hitting 50 not out and Spencer Fielding 64 not out. So it was a frustrating afternoon for the 2nds.

Rye third team hosted Pevensey seconds for their latest East Sussex division 11 fixture. On losing the toss the home side were asked to bat first.

A steady start was made with an opening partnership of 110 between Paul Payton and John Mackenzie, before the latter was run out having scored 74. Ross Pierce then joined Payton and looked to increase the run rate before Payton also fell victim to a run out, scoring 51. Pevensey took a flurry of wickets through the bowling of Ian Swingler ( one for 35) and Marcus Cull (two for 32). Oscar Goodsell hit a quick 10 before being bowled by James Matanle (one for 55) as Pierce finished on 53 not out with the home side scoring 212 from their allotted overs.

In response, Pevensey got off to a steady start aiming to keep above the run rate in light of the threatening weather. Rye’s opening bowlers were unable to make a breakthrough until Ben Pedroza (30) was bowled by Freddie Mackenzie (one for 23). Mike Stoneham (one for 30) dismissed number 3 Ian Stiles (15) before Pierce bowled opener Christopher Pedroza having scored 99. James Matanle (32) was the only other wicket to fall as Pierce finished with figures of two for 13 and Pevensey reached their target with two overs to spare.

This Saturday Rye 1st XI travel to Cuckfield 2nd XI with six more games to secure the Division 5 East title, as they enjoy a 12-point advantage over next-placed Seaford. The 2nd XI host Hellingly 2nds in a match sponsored by The Mermaid Inn, and the 3rd XI make the short trip to play Robertsbridge 3rds.

The Summer Coaching programme ended last Friday. More than 60 young people have been involved in this year’s programme. The Under 14s will be participating in the Sussex Junior Cricket Festival from August 7,  playing against Seaford, Lewes Priory, Bexhill, St Matthias and Glynde during the week. The Club is also looking forward to a trip to Canterbury on August 4 to watch Kent v Sussex in the T20 Blast.