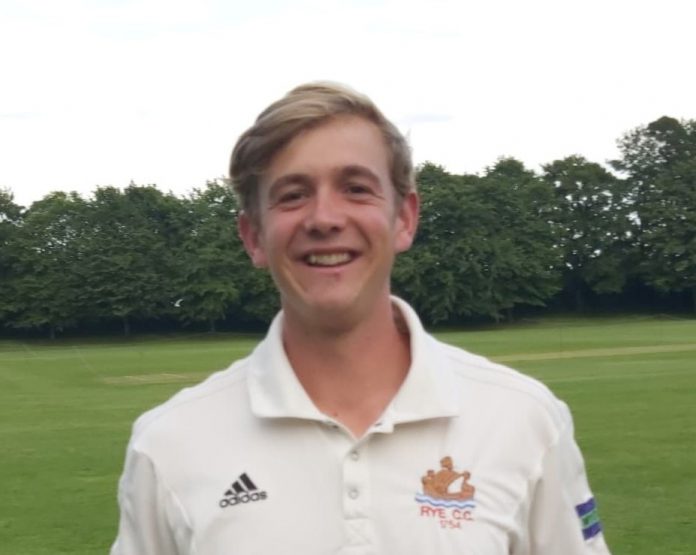 Rye 1st XI returned to the top of Division 3 East with an incredible display of hitting in this match sponsored by My Sweet Old Etcetera, as they defeated Portslade by 92 runs.

Rye batted first and struck 398 -5 in 45 overs. Skipper Harry Smeed scored 147, followed by Luke Payton, 75, Carl Mumba, 66 n.o. and Jackson Woodcock, 48. Harry Smeed and Jackson Woodcock shared a 202 run partnership, which set up the onslaught from Payton and Mumba. The work of the club to improve both the wicket and the outfield is paying dividends.

Portslade too enjoyed the conditions as they were finally dismissed for 298 in the 42nd over. Sam Cooper with 110 and Owen Piper, 95 put on a 150 run partnership. For Rye, Carl Mumba and Ryan Dowdeswell picked up a couple of wickets each, with James Smeed taking 3-54.

The return to the top was secured as rivals Ifield lost by 1 wicket to Preston Nomads off the last ball of the match. The race to the title switches to an away fixture at Crawley Eagles next Saturday.

The 2nds put up a good fight against table topping Hailsham 2nds. A depleted Rye side scored 190 all out, led by Will Wheeler, 50 and Jack Keen, 50. In reply Hailsham eased past the target 4 wickets down. This Saturday Rye host Eastbourne 3rds at The Salts in a match sponsored by The Mermaid Inn.