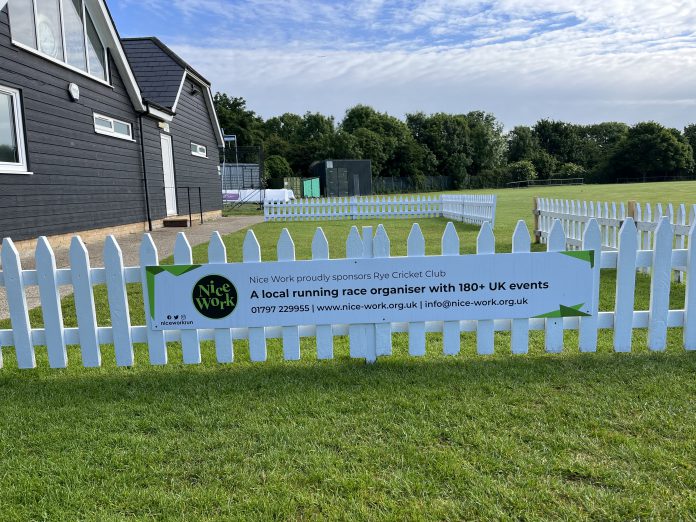 Rye 1st XI, in a match sponsored by My Sweet Old Etcetera, made it 5 wins from 5 with victory over Glynde at The Salts last Saturday. Rye posted 214 -9 in 45 overs. Reuben Collingwood, with 46, led the early charge, supported by Harry Smeed, 22. At 131-5 the game was in the balance. However Carl Mumba, 52, and George Wathen, 23, shared a 50 run partnership that saw Rye secure maximum batting points. The pick of the Glynde attack was Rowan Naude with 5-45. In response Glynde were soon in trouble as Carl Mumba took 3-32 and Glynde were 34-3. James Peck, 30, and George Burton-Durham, 34, led a recovery, but George Wathen, 3-51, and Ryan Dowdeswell, 2-4, saw Glynde dismissed for 151 and Rye victors by 63 runs. Next Saturday Rye 1sts make the short journey to play Bexhill 1sts in a local Derby.

Rye 2nds recorded a second victory of the season with a 97 run victory over Iden at The Park. Rye won the toss and batted. The loss of two early wickets only brought Fin Thomson, 90, and Fred Smith, 54 n.o., together as they shared a 130 run partnership. Kyle Scott with 20 maintained the momentum as Rye finished on 228-7 off 40 overs. Joel Pearce, 2-33, with the best return.

Iden lost Rob Clemence to an injury sustained in the field and Rye did not let them off the hook. Fin Thomson, 2-12 off 8 overs,, and 15 year old Joseph Kemsley, 3-31, put Iden on the back foot as Iden finished on 131-7 off 40 overs. Matt Barnet, 28, top scoring for Iden. Next Saturday Rye host Polegate and Stonecross in a match sponsored by The Mermaid Inn.

Rye 3rds completed a second hat trick of victories for the club, defeating Willingdon 3rds by 9 wickets. Willingdon were dismissed for 98 in the 40th over. Alan Bettesworth, 38, the only person to shine with the bat. David Jempson, 2-10, Alex Stone, 2-17, and Neil Archer, 2-0, restricted Willingdon. Rye then made short work of the target as David Jempson hit 30 and Colin O’Neill 37 not out, as Rye went past the target in 21 overs. Next Saturday Rye host Herstmonceux 3rds.