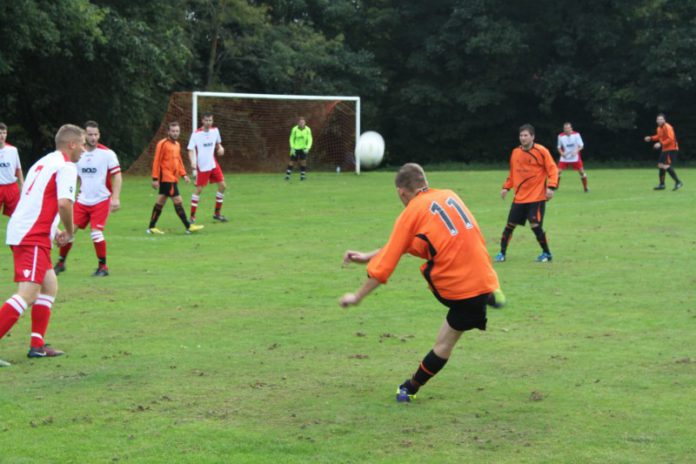 Not for the first time this season Iden fought back from going a goal behind, Peche having scored with a midfielder having enough time to control, look, take aim and strike without being opposed. The player probably still had time to make a cup of tea before any Iden player tried to close him down. Nevertheless a tame shot squirmed under the muscular frame of Ridgers into the net.

Chris Gould along with Justin Wall in the centre of the park took hold of the game protecting their defence as well as creating for their side. The equaliser came quickly after conceding, as Gould’s right foot played a ball onto the speed demon Cooper who headed past the oncoming keeper too equalise 1-1.

Kyran Wall playing in the unfamiliar roll of left wing back was solid defending well and listening too his team mates and a decent pass from Wall to Cooper resulted in a free kick after a later challenge. Gould fired in from distance a carbon copy free kick of the one against Rock-a-Nore to put Iden in front before the half time whistle.

After a short interval the home side where eager to return to action, with Liam Cobley testing the away keeper a few times and hitting the target with great technique. Manager Chip Winton became more involved in the second half, elegantly moving across the pitch – one supporter said he was like “Angelina Ballerina”.

The game was sown up in the 70th minute with Alfie Weller smashing home the first goal of his season thanks to the assist of Cooper. Weller deserved a goal following a few blank weeks – the striker always works hard and is near full fitness now so many more goals will surely come.

Captain Tom Harris had yet another faultless game at the heart of the defence, blocking and heading like a cultured defender. Luke Willis had his attacker deep in his pocket, frustrating him and not allowing him a sniff at goal. So overall it was a good cup win for Iden with some encouraging performances, particularly from man of the match Kyran Wall, Chris Gould and Tom Harris.

A trip to current champions Hollington awaits next week when Iden welcome back Rob Levett, Jake Bryant and Nathan Hills as well as Ben Heffernan who returns after a long injury.