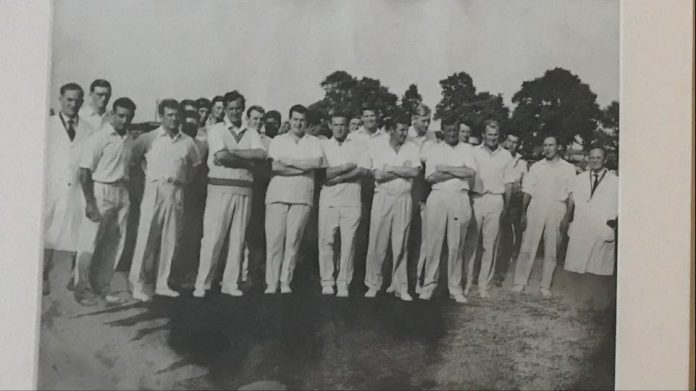 This week we go back to 1964 when a large crowd welcomed a Jim Parks Xl to the Rye Cricket Salts in his Benefit Year. Jim Parks, Ted Dexter, and Alan Oakman were all England Test Cricketers, and Rye featured familiar local cricketing families, Hacking, Thomson and Mathews.

There were nearly 1,700 spectators at Rye Cricket Salts on Sunday for Jim Park’s Benefit match against Rye Cricket Club and a record £322 was raised.

There was only one touch of tragedy. Peter Mathews, Rye’s captain, had badly sprained a side muscle during the previous day’s match against Heathfield Park and was unable to bowl. His first ball as a batsman sent him to the ground crumpled with pain – but he carried on.

When Jim Parks declared at tea time with the score 2 for seven both he and F. Fountain had scored 47 apiece. Jim Parks’ fifth wicket stand with Ted Dexter 59 not out, produced 86 runs. It was a fine catch by J.Bryden off Martin Oldaker that dismissed captain Jim Parks.

A good deal of credit must go to the Rye bowlers, Martin Oldaker 3-37, and Michael Matthews 2-36. After being 11-3 in the first 25 minutes, Rye raised their score to 186 by a flurry of fours and a couple of sixes by Robert Hacking and Dickie Thompson.

Robert who knocked nine fours and a six scored an exuberant 58. He was finally caught by Alan Oakman off Jim Parks.

Dickie, whose 29 included three fours, was stumped by Terry Gunn when he took a swipe out of the wicket and struck air.

In a beer match afterwards, Rye batted first and knocked up 182, with Robert Hacking, Martin Oldaker and Nigel West having a glorious time of it, bagging 45, 56 and 25 runs respectively.

Jim Parks Xl opened with Ted Dexter and Terry Gunn. Dexter was stumped by Stan Jones when he had made 27. Terry Gunn fell likewise for 13. Then Jim Parks added 23 before being caught by Thomson. F.Fountain was also caught by Thomson for a mere five.

One of Sussex’s greatest sportsmen

Rye Club President Mr W J Hacking, in a short speech at the end of the match, referred to Jim Parks as one of the greatest sportsmen Sussex had had for a long time. He went on to thank all concerned with making the day so successful, making special mention of Jack Kent who had done so much to arrange the match.

Jim Parks warmly thanked both teams and said “This is the best “out” match we have ever had. It’s a record”