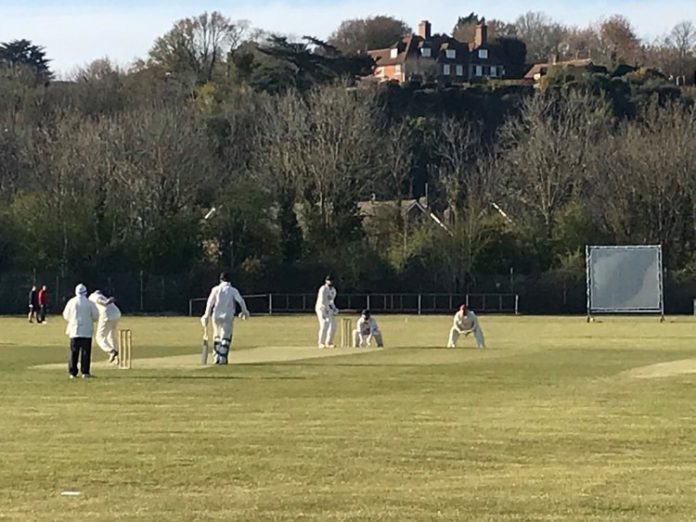 Last Saturday the sun shone, but the wind did blow, and the runs flowed all afternoon in the second of three pre-season games the 1st Xl are playing, prior to the start of the league season on May 8 against local rivals Bexhill.

Rye lost the toss and Cowdray took the opportunity to bat first, and take advantage of another good batting track. Jack Mutch 70 off 66 balls and Glen Warner 72 off 73 balls sped Cowdray towards a large total.

The Rye bowlers struggled to bowl consistent lengths, and were punished – but James Smeed 2-25 off 8 overs was the pick of the bowlers. The end of the Cowdray innings saw Jake McGroaty hit 49 not out and at the end of 40 overs they had amassed 253-4.

Rye’s reply stuttered against accurate bowling as Ben Mutch took 4-36 and Nicholas Farr 2-26 reducing Rye to 46-6. But visions of a huge defeat were banished by the seventh wicket partnership of Tobias Farrow 84 not out off 70 balls and Reuben Collingwood 66 off 60 balls as they threatened to take Rye towards what seemed an unlikely victory.

But the fall of Collingwood ended the chase, and Rye succumbed to a 31 run loss as Rye finished on 222-8 off 40 overs.