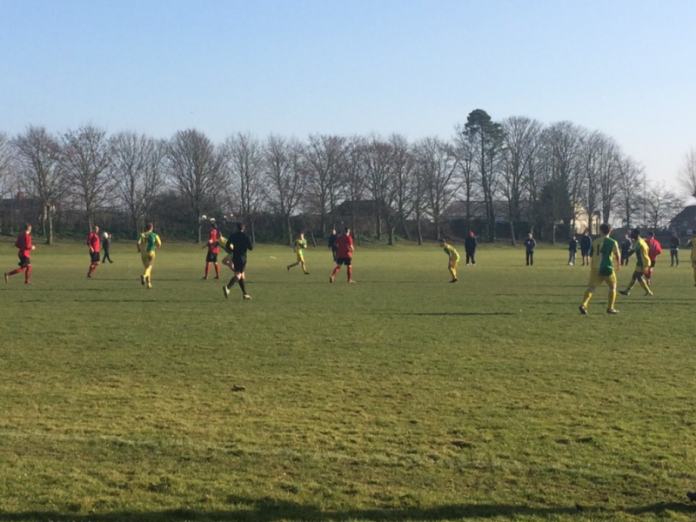 After reaching the semi final of the Hastings & District FA Junior Cup in their last match, Rye Town were hoping to reach another semi final, this time in the Robertsbridge Charity Intermediate Cup, playing Westfield II.

The first 25 minutes of the match were pretty equal, before Rye Town slowly started to take control of the game. In the 31st minute, Town made it 1-0, after a good finish from Ben Heffernan beat the Westfield’s goalkeeper, following a nice move. Two minutes later, a lovely header from Alfie Weller made it 2-0. There were a few chances to add to their lead before the break, but the half time whistle went, with Rye Town leading 2-0.

Town continued to push for a third goal after the break, with their persistence finally being rewarded in the 66th minute, Dom Cruttenden making it 3-0 from a driven free kick. Weller headed the team into a 4-0 lead in the 77th minute after a cross by Sammy Foulkes.

Ten minutes later, Charlie Stevens made it 5-0, before Foulkes finished off the scoring in the 89th minute, making it Rye Town 6, Westfield II 0. Town will now face either JC Tackleway or Hawkhurst in the semi finals. Ben Heffernan was man of the match.

This Saturday February 25, Rye Town get back into league action, away to fifth-placed Wadhurst United. Two points from their final three league matches will make absolutely sure of their finishing in one of the two promotion positions, after third-placed Crowhurst suffered a surprise 5-4 defeat at home to bottom-of-the-table Mountfield United two weeks ago.