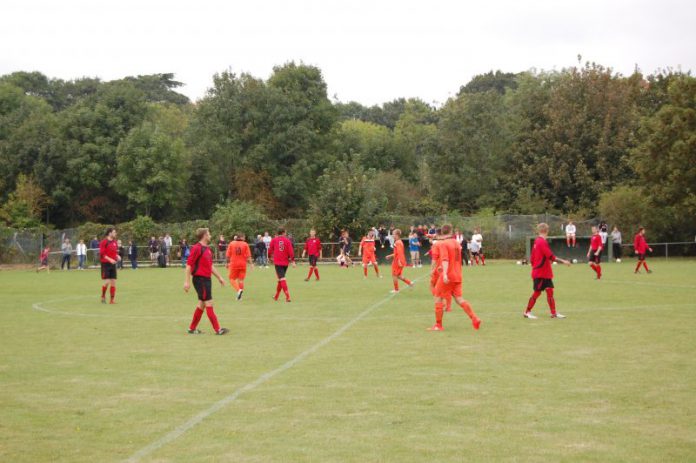 Rye Town Football Club left it late to salvage a deserved draw in a top-of-the-table clash.

Luke Willis came up from the back to head home an 88th-minute equaliser in the 2-2 draw at home to Bexhill Town on Saturday. The result means that both clubs have lost their 100 per cent records, but remain unbeaten in Macron East Sussex Football League Division One.

In front of another good crowd at The Salts, Bexhill had the better opportunities early on and went ahead in the fifth minute. A rash tackle by Sammy Foulkes conceded a penalty, which Doni Dovla neatly tucked away. Rye struggled to break down a physically strong Bexhill defence, led by former Rye United and Hastings United player Rhys Whyborne, during quite a feisty encounter where both sides put in plenty of tackles.

The hosts were forced into a reshuffle when Rob Levett went off with a calf injury which is likely to keep him out until the new year. Dom Cruttenden moved forward from defence to fill the void up-front and scored Rye’s 37th minute equaliser with his first touch in the final third. Charlie Stevens broke through and although initially it looked as though the chance had gone, his pace enabled him to get a vital touch on the ball and Cruttenden finished neatly.

Rye did have one other clear chance during the first half, but Stevens blasted over the crossbar and indeed the Sidney Allnutt Pavilion when one-on-one with the goalkeeper. Rye were second to the ball throughout the opening 45 minutes and Bexhill seemed to want it more. But after a few stern words at the interval, Rye were like a different team during the second period and worked tremendously hard.

They fell behind again, however, in the 55th minute to a second Bexhill penalty. This time Sam Henham lunged in on a Bexhill player going away from goal and Dovi again made no mistake from the spot. With Ollie Skinner brilliant on the wing, despite being on the receiving end of some hefty challenges, Rye kept on pressing for a route back into the contest. Unusually for them, Rye spurned a few headed opportunities, including a particularly clearcut one for Rob Wilson, but their persistence paid off in the end. Bexhill conceded three free kicks in dangerous areas in quick succession and eventually Willis, who had an uncharacteristically poor game, rose to score with a great header.

Foulkes was the Pikes Cleaning man of the match, although utility man Kevin Earl is also worth a mention having done a decent job as an emergency target man during Rye’s push for an equaliser. The match was sponsored by Darren Paine of Cinque Ports Sweep.

Rye remain top-of-the-table but only four points cover the leading five clubs in what’s shaping up to be a fascinating title battle. Their next test on Saturday, October 29, is a trip to a Little Common second team which has risen to second after scoring 11 goals in each of its last two matches. Richard ‘Alfie’ Weller has taken a knock to his knee which could see manager Shane Ridgers returning in goal. Francis Walker is unavailable again, but Ben Heffernan is hoping to return following an ankle injury.

In other news, Rye’s players have clubbed together to buy some fold-up chairs and umbrellas for their more senior spectators so that they can watch the games in added comfort. Anthony Di Cesare, of Quayside Cars Rye, donated £30 towards towards the cost.