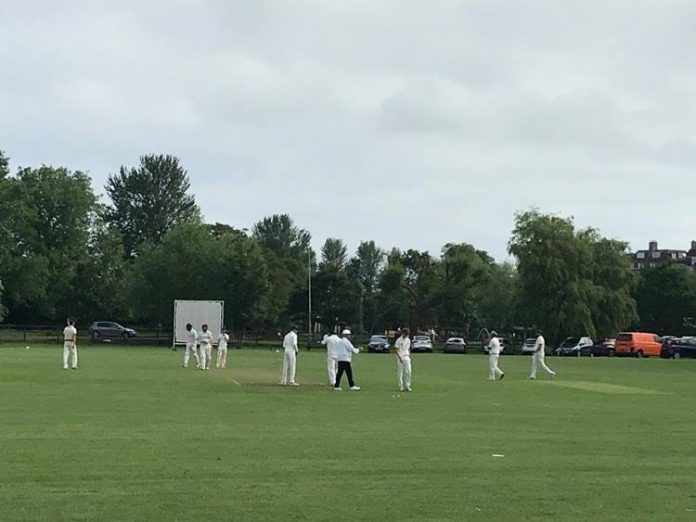 It was groundhog day again at Rye last Saturday. Rain since Wednesday had seen the covers yet again placed on the square, and the Friday night softball session had been cancelled. So it was an early start Saturday morning to remove the gallons of water on the cover, and complete wicket preparations for the visit of Eastbourne 2nd Xl.

Rye’s response was measured on a wicket still offering bowlers movement. Opener Harry Smeed hit 20, and James Hamilton 30 as Rye got to 83-2, and then Luke Payton 33 not out and Daniel Stickels sped Rye past the 150 target in 35.1 overs. Luke Payton demonstrating some huge power hitting whilst Dan Stickels threatened the integrity of a number of car windscreens.

Rye’s victory maintained their top spot in Division 3 East with 7 of the 18 rounds of matches completed. This Saturday Rye travel to play Crawley Eagles who lie 4th in the Division.

Rye 2nds were washed out at Laughton, receiving the dreaded phone call early Saturday morning. Rye 3rds were more fortunate with their visit to Pett 2nds. Rye 3rds recorded an exciting 3 wicket victory. Pett batted first and were progressing well at 96-4. Glenn Oakman and Will Giles with 23 apiece. The early wickets had fallen to 18 year old Freddie Mackenzie 3-10 and 17 year old George Jempson 1-26. It was then 16 year old Toby Channon with 5-36 and 16 year old Johnny Broad 1-23 who restricted to Pett to 107 all out in 27 overs.

Rye’s response was measured as runs came slowly. John Mackenzie 22 and Ross Pierce 23 led the way, then wickets fell regularly as Jon Fitton 2-7 off 9 overs led the Pett attack. 14 year old Sam Channon made a stubborn 9 as Rye edged closer. It took Freddie Mackenzie with 17 off 9 balls to get Rye to 108-7 in 37.4 overs.

The Friday evening sessions have been disrupted by the weather. So the replacement dates are July 2, 9 and 16 with the annual Bat & Trap event on July 23. During the July sessions parents will be receiving training from Rother Responders on how to use the club’s new defibrillator, which has been installed in memory of Rye’s former president David Dee who suffered a cardiac arrest in January 2020.

On the pitch Rye U11s play a double header, home and away to Tenterden on Monday, whilst the U13s travel to Egerton on Thursday.