As everyone was finishing lunch, Dante started barking. He was barking because he’d mislaid one of his favourite things. He couldn’t find his newest, best yellow tennis ball, which he calls his “bestest ballie”. When Dante has a problem he thinks the only way to solve it is to sit down, wherever he finds himself. Bark as loudly as he can, until someone comes along and solves the problem for him. The others know this and normally run to help. But after a big lunch they simply didn’t have the energy and didn’t feel like joining in his treasure hunt.

After what seemed like ages of non-stop barking, and just at the point when none of them could stand it any more. Lily-Poo said, “I’m off to find a quieter spot to curl up and let my lunch go down. Does anyone want to join me?” They all thought this was such a sensible idea, so very slowly, one by one, they slinked off up into the dunes without Dante realising. Once the barking was out of earshot, they all settled down for a bit of peace and quiet.

The most prized thing in the whole world to Dante is his bestest ballie; having a ball with him wherever he goes makes him feel extremely happy and complete. It doesn’t matter what he’s doing, as long as he has a ball near him, he’s happy, and more importantly, quiet! 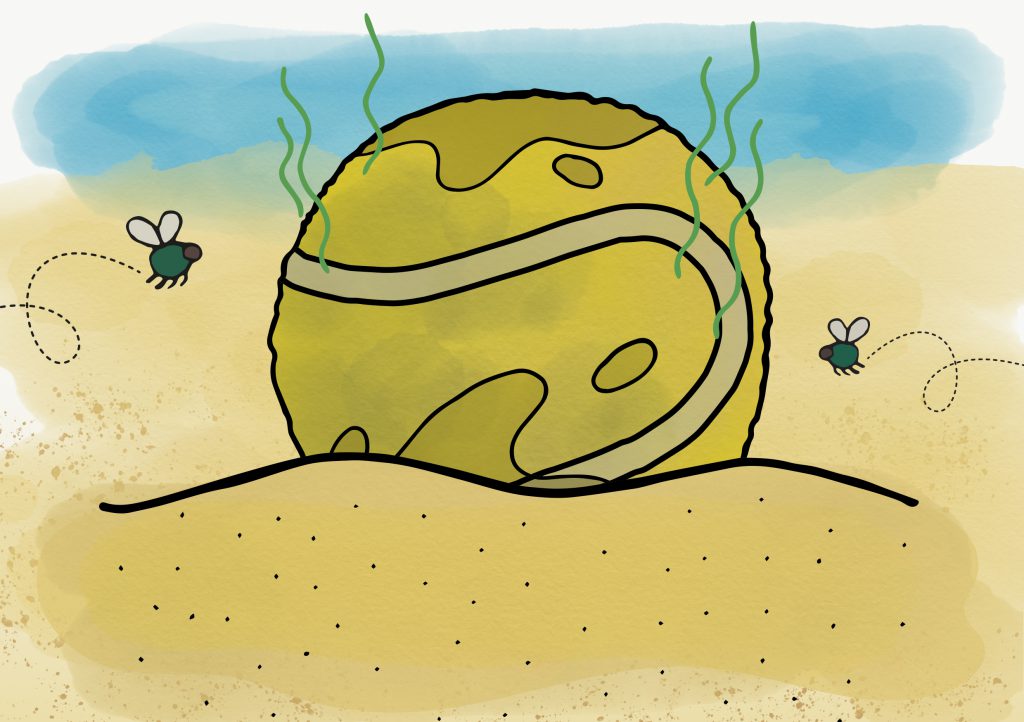 Dante normally knows where all of his tennis balls are. If he thinks they are scattered too far apart, for him to keep his eye on, he piles them up in one place so he knows they are completely safe. He has a whole variety of “bestest ballies” from dirty smelly yellow tennis balls to more fancy ones that squeak. Whatever type, they must be kept in the safest of places. DeDe and Lily-Poo aren’t at all interested in any type of ball, something that Dante and Harley find very strange. They simply put the fact down to one of life’s unsolvable mysteries, because how could any doodle not love a bestest ballie?

When Dante can’t find something, he has a one track mind until he finds it again. His searchings are probably the only time he’s able to concentrate and not get doodle-distracted. When he’s lost something he isn’t interested in anything that’s going on around him. He’s intent on hovering his nose slightly above the ground, with his tail swirling like a helicopter to help him concentrate.

The sad thing is that while he’s concentrating on his search, he’s not noticing all the other good things of the day. Such as the sunshine, the clear blue skies and the sound of the seagulls swirling up high. All he knows is that when he finds what he’s looking for, he’ll be totally happy for the rest of the day.

Dante has a very methodical way of searching, which is strange for doodle behaviour, because normally doodles are impetuous and “of the moment” as the trendy furless two legs like to say. It’s easy to see where he’s been searching because he leaves a trail of paw prints in the sand behind him.

On this afternoon, while Dante was engrossed in his intensive search with much sniffing and swirling of tail, he didn’t realise that Harley had started to look for his bestest ballie; and also had his nose hovering just above the ground. They were both searching for what seemed like a very long time. Then all of a sudden Dante smelt the sweetest faintest smell of the stinkiest, filthiest bestest ballie float past his nostrils.

Now it’s all very well getting a faint whiff of a tennis ball, but the clue didn’t tell him exactly where it was coming from. Was it left? Was it right? Was it up the beach? Was it down the beach? Was is back? Was it forwards?  Dante is never good with his left and his right, so he knows the best thing to do in situations like these is take a deep breath and, as he’s heard the furless two legs say, “Evaluate the situation”. He’s not sure what this actually means but it seems to involve stopping and starting again. So that’s exactly what he did. Sadly evaluating the situation this time didn’t seem to help. He then decided to run on the spot to see if that helped him find where the sweet smell was coming from.

After a few bursts of jogging on the spot, and before he felt dizzy, he concluded the best way was “up, left and forward”. As he ran in the direction of up, left and forward the sweet smell of bestest ballie became stronger and stronger, until all of a sudden the ball was there!

Being wrapped up at reaching the prize he didn’t notice that Harley had also found the same ball at the very same time! They could have collided bang, slap into each other, but luckily both stopped just as their noses were tip to tip with the ball between them. They each quickly grabbed  the half nearest to them, and started to pull one way and push the other, growling and holding on tightly to their prize.

Harley is always a good boy and never wants to make anyone unhappy. So after a little while he let go of his half and let Dante run off to the sea with the ball gripped firmly between his teeth.

Dante was delighted with his achievement, and when he was sure nobody was nearby to take it, he lay down in the sun with the ball between his paws. He was so pleased with himself that he got lost in his thoughts while crunching and chewing with delight. He was sure the others would be envious he had the ball and would certainly want to take it from him.

When it was nearly dark and almost time to go home Dante looked across the beach and realised none of the others had come anywhere near him or had been the slighted bit interested in his ball. Dante felt sad and realised he hadn’t played with anyone all afternoon. Perhaps they all knew he’d be grumpy if they came near him.

It dawned on him that by wanting something so badly he had forgotten everything else that was important, such as friendship and the love he had for the other doodles. So before it was too late he went off to find Harley. When he found him halfway down a very big hole, Harley was a little wary of what Dante wanted to say. Luckily he saw Dante had a smile on his face, so he climbed out of his hole for a chat.

They both sat down because Harley could see that Dante had a look on his face that implied he wanted to have one of his “boy’s talks”. Dante told him that he now knew he had been rather selfish by not letting him share the ball. He said he felt sad and offered that Harley could take the ball home for the whole night if he wanted to.

Harley sniffed the smelly, chewed old ball and said it was very kind of Dante to offer, but in fact he had cleaner, nicer ones at home. So thank you very much, but “no thank you!” In fact, he doubted whether his furless two legs would even allow the smelly thing in the car, let alone in doors on the carpets. Instead he suggested they dug one last hole together and leave it somewhere safe for tomorrow.

Dante liked this idea because he knew digging a hole would make Harley happy, it would also be a safe place they could both remember. After they had buried the ball together Dante hugged his special friend and thanked him for helping him learn to share. He now realised that by doing things together makes everyone so much happier.

[Editor’s note: Any doodle or its owner who would like to know more about the real life doodles and walks on Camber Sands can visit the Doodles Facebook page or check out their website]