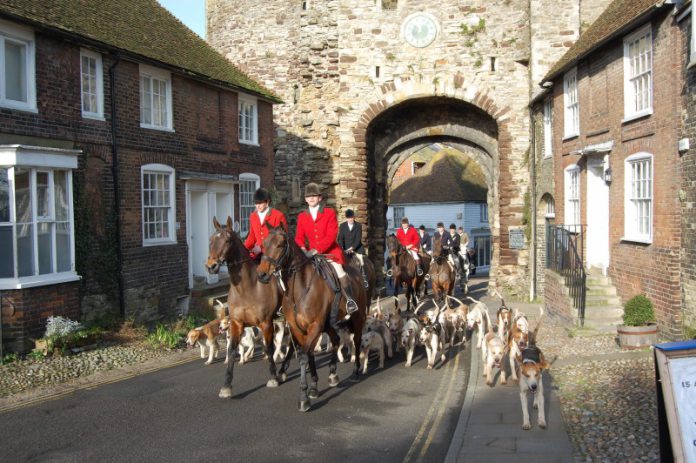 The sight of the hunt coming up through the Landgate is always a colourful spectacle, and one to watch out for in January. Hooves clattered along Rye High Street in smart order and into the Mermaid Inn yard, where innkeeper Judith Blincow offered a stirrup cup and refreshments to cheer the hunt on its way.

Senior Master of the East Sussex and Romney Marsh Foxhounds, Diana Grissell, was accompanied by joint masters  Nigel Hacking and Andrew Sallis, 30 or so riders and 13 and a half couples of foxhounds. Kennel man “Foxy John” explained that hounds are traditionally numbered in couples “because they’re easier to count”.

The scent had been trailed early on the Tuesday morning (January 27), between Peasmarsh and Iden by means of a rag impregnated with essence of fox, an expensive commodity necessitated by the Hunting Act 2004.

“This is the fourth consecutive year of the hunt visiting Rye, after a break of 50 years,” said Hacking, an ex-pupil of Rye Grammar School and grandson of a former mayor of the town. When asked what sort of people go hunting his response was unequivocal. He said that it appealed to a very wide range of people, young and old, who enjoy horsemanship and the countryside, though most had some connection with the land. Farmers and their families were well represented and among the others were the auctioneer from Ashford Market, a correspondent for Horse and Hound and a National Hunt racehorse trainer.

“People think it’s elitist, but it’s not,” said one bystander, who preferred to be nameless. The colourful occasion, the obvious pleasure of the riders and hounds on a bright winter’s morning and the turn-out of spectators all spoke in favour of this innocent country pursuit.