Milly came home last Wednesday on her 15th day of absconding. More accurately, she was brought home ignominiously in her cat basket. We had this call mid-afternoon from some friends in West Street to say that a black cat with a bushy tail was up a tree by their garden wall. Was it ours?

There had been sightings before, in the High Street and behind the Kino, but her adventurous spirit – call it wanderlust – had perhaps taken her further afield. Answering the summons hotfoot I found her and most willing she was to be found. 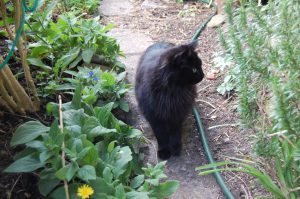 Once home, she ate like a ravening wolf and was closely inspected by Mimi her deserted companion, who learnt far more about her adventures than we ever could. And weren’t we pleased to have her home again? Of course we had to invite her to self-isolate for two weeks, but that was not by way of punishment, and anyway she refused to be constrained. She was a free spirit, she told us.

The moral of this story is don’t give up on your moggy; they have a habit of turning up; oh! and don’t please don’t feed someone else’s cat. It’s simply not fair!