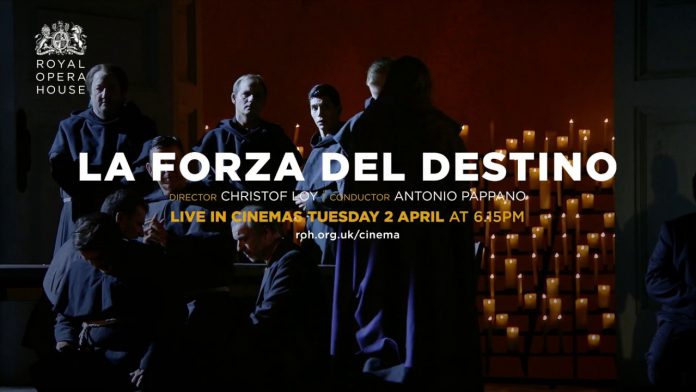 Event cinema at the Kino from Friday, April 5

Monday, April 8, 6:15pm
Leonora falls in love with Don Alvaro, but when her father forbids their marriage, a fatal accident triggers a drama of obsession, vengeance and tragedy. Jonas Kaufmann and Anna Netrebko star in Verdi’s epic La forza del destino (The force of destiny) an opera which demands the very best of singers for its powerful music and the fullest theatrical treatment for its story of bitter revenge pursued across miles and years.

Thursday, April 11 at 7pm; booking now
Gillian Anderson and Lily James lead in the story of Margo Channing. Legend. True star of the theatre. The spotlight is hers, always has been. But now there’s Eve. Her biggest fan. Young, beautiful Eve. The golden girl, the girl next door. But you know all about Eve, don’t you? Lifting the curtain on a world of jealousy and ambition, this new production, from one of the world’s most innovative theatre directors, Ivo van Hove, asks why our fascination with celebrity, youth and identity never seems to get old.

Wednesday, April 17 at 7pm; booking now
Come into the forest and dare to change your state of mind. Director Kimberley Sykes directs a riotous, exhilarating version of Shakespeare’s romantic comedy. Rosalind is banished, wrestling with her heart and her head. With her cousin by her side, she journeys to a world of exile where barriers are broken down and all can discover their deeper selves.

Tuesday, April 30 at 6:45pm, booking now
There are many versions of the story of Faust, who trades his soul with the devil for youth and power, but Gounod’s opera remains one of the most constantly enthralling. Virtuoso leading roles, a large chorus, sensational sets, ballet and an ecstatic finale make this the epitome of theatrical spectacle. Starring Michael Fabiano, Diana Damrau and Erwin Schrott.

Tuesday, May 14 at 7pm, booking from 2pm Friday, May 15
Broadcast live from The Old Vic in London, Academy Award-winner Sally Field (Steel Magnolias, Brothers & Sisters) and Bill Pullman (The Sinner, Independence Day) star in Arthur Miller’s blistering drama. America, 1947. Despite hard choices and even harder knocks, Joe and Kate Keller are a success story. They have built a home, raised two sons and established a thriving business. But nothing lasts forever and their contented lives are about to shatter.

Thursday, May 16, 7:15pm, booking now
The contemporary face of The Royal Ballet is shown in works from three of today’s leading choreographers. Christopher Wheeldon’s Within the Golden Hour is based around seven couples separating and intermingling, to music by Vivaldi and Bosso and lit with rich colours suggested by sunset. Crystal Pite’s Flight Pattern, revived for the first time, uses a large dance ensemble and Górecki’s familiar music from his Symphony of Sorrowful Songs for a poignant and passionate reflection on migration. Between them, a new work by Sidi Larbi Cherkaoui, created on The Royal Ballet has its premiere to bring the contemporary truly up-to-date. The cast includes Beatriz Stix-Brunell, Lauren Cuthbertson, Sarah Lamb, Vadim Muntagirov, Ryoichi Hirano and Steven McRae.

Tuesday, May 21 at 8:15pm, booking now
This thrilling, audacious and witty production is perhaps still best known for replacing the female corps-de-ballet with a menacing male ensemble, which shattered convention, turned tradition upside down and took the dance world by storm. Retaining the iconic elements of the original staging loved by millions around the world, filmed live at Sadler’s Wells Theatre and starring Will Bozier, Liam Mower and Nicole Kabera.

Wednesday June 5. Details to be advised.

Saturday June 8, 8pm, Booking now
Celebrating 30 incredible years, Take That are bringing their spectacular 2019 Greatest Hits tour to cinemas for one night only. Broadcast live on Saturday June 8 from their last UK concert of the tour, this highly anticipated anniversary show promises to be their best yet.

Thursday June 27, details to be advised
A company of 40 actors takes to the stage of the National Theatre in this timely and moving story. For more information visit: ntlive.nationaltheatre.org.uk/

Sunday August 4 at 5.30pm, details to be advised