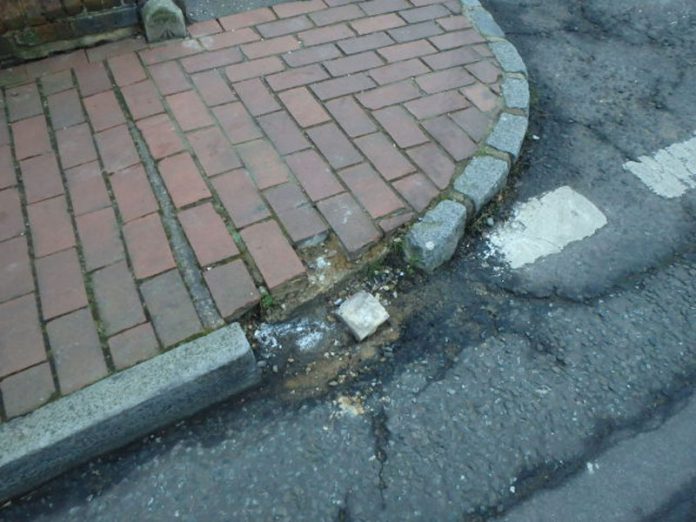 Local conservation group Winchelsea Heritage has raised the tempo of its long-running campaign to secure repairs to what it described as the ancient town’s “embarrassing and deteriorating” roads, pavements and verges. The group says that members have complained that calls for action made to ward councillors on Icklesham Parish Council have met with inaction. A request to one Winchelsea ward councillor about a kerb that has been broken for over a year (and was the scene of a serious accident in which a pedestrian broke her arm) reportedly met with the response, “I will consult my fellow ward councillors and we will discuss the best way forward”. Winchelsea Heritage also questions the effectiveness of East Sussex’s highways stewards, who are supposed to report road and pavement defects, and suggests they might be under-resourced and overstretched. The group notes that some potholes are filled in but others a few inches away are not. Most of the repairs are criticised as “bodging”, particularly where holes have been filled with tarmac, which is then ground out of the hole by traffic.

East Sussex County Council has been contacted directly, but callers are asked to register problems on the FixMyStreet website. Winchelsea Heritage is concerned that residents without internet access, particularly the elderly, for whom broken pavements are a serious risk, will be dissuaded from reporting. So members of the group went out to record and photograph potholes, broken kerbs, damaged road surfaces and eroded verges. These have been logged on to the East Sussex website.

Spokesman John Haddock explained: “We have made 36 reports so far. The Winchelsea map on the FixMyStreet website looks like it has sprouted. We reckon that we will have another couple of dozen to add, even excluding minor defects. And we haven’t really included damaged verges, as East Sussex don’t care about these features of our town.”