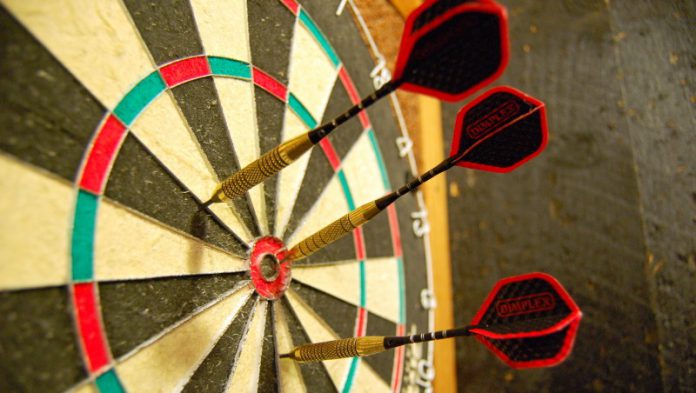 Brighton Red Oaks rolled into Rye to compete in the first super league darts fixture between the two sides on Wednesday evening, but shuffled away narrowly beaten 5-4.

As crazy as it sounds, Sam Cooper (20.59) had to take a “fitness test” before the game on his darting wrist, but it didn’t stop him winning 3-0 beating Bob Albiston (18.38). Cooper used a performance-enhancing wrist support which aided his win.

A somewhat sloppy performance didn’t stop Steve Stikels (20.59) brushing past Denny Brain (18.76) 3-0. “A win is a win”, Stikels stated after his game, but with only a single ton in three legs, next time he may not be so lucky.

John Ripley (26.37) got better as his game went on, against Red Oaks Russell Vanner (23.89). 23 20 14 darts were needed to claim a 3-0 win for Ripley. Every ton plus that Vanner scored, Ripley responded to, with a ton plus himself, making his dangerous opponent look ordinary. Rye four up with five to go.

Dave Goddard (23.84) didn’t do a lot wrong playing the game, despite his disastrous attempt to look like his rap idol Eminem, but was beaten by the man of the match David Hetherington (26.84) 3-0. Goddard, firing three 100s and a 60 in the last leg, didn’t get a sniff at a double.

Young Justin Wall (17.81) wasted too many chances at the doubles losing 3-0, leaving Martin Baker (19.03) the victor. Wall has potential and must stick at it, his time will come, as will the confidence to attack the board.

The rot needed to stop, two consecutive games being won by the away side. Shane Ridgers (22.25) took early control against Shaun Sandells (23.24) leading 2-0 but, as he has all season, simply didn’t perform. Needless to say, Sandells did turn it up a notch winning two legs in 16 17 darts. Ridgers then regained some spirit to fall over the line winning 3-2 in 18 dart final leg.

The match was won for Rye with two games remaining. Eric Elliott (18.39) kept up his début season by drawing top dart players, this week Simon Parsons (25.91), who defeated Elliott 3-0. If the missed doubles weren’t involved, the average for Parsons would have touched the 30 mark.

Rye’s unbeaten Dan Martin (20.43) and Geoff Taylor (19.27) both had times in the game where they looked stranded. Martin leading 2-0 looked destined to win but the Sussex player Taylor showed his grit, to bounce back in the remaining three legs to claim victory. Martin lost his unbeaten status, with Taylor worthy of a win.

The match was sponsored by Smiley Faces Events Hire Ltd