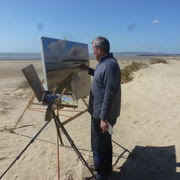 Rye News will be regularly featuring artists on our culture pages.  This week we feature Karl Terry, renowned plein air artist, who is well known to many people in Rye and beyond for his atmospheric landscapes.  He is, he says, inspired by a wealth of coastal landmarks recording what he describes as ever-changing moments and weather patterns. His favourite places to paint are Camber, Winchelsea and the local landscape near Wittersham where he lives.

If Covid-19 hadn’t happened, he would now be exhibiting his work at an exhibition at The Rye Art Gallery alongside his great local painting friend, Tom Marsh but he hopes it will take place later in the year. A selection of his latest works are shown in the gallery below.

Karl works in oils producing both landscapes and cityscapes. He says “my works are a response to what I see in particular moments in life. It might be figures strolling much-loved coastlines, glistening in ever changing light patterns, or simply perusing high streets of local towns, typical scenes from our everyday existence”

Nearly all his work is painted outside in all weathers and that is really what excites him. “I like to be out in the elements responding to what I see and feel, and I just don’t enjoy working in the studio so much. It really is exhilarating trying to capture a beautiful landscape as it changes in front of you and working outside forces one to work extremely fast. It’s like speed painting!”

Karl also paints cityscapes and belongs to the Wapping Group of Artists, which is one of the oldest outdoor painting groups in London. “We meet on Wednesdays between April and September at different venues along the Thames and in London. As well as that, I usually have a few painting trips each year where I catch up with artists friends. I am very lucky to have been to Venice every year for the last 10 and have been lucky to stay in Ken Howard RA’s studio each time. It’s become like an annual pilgrimage. The great thing about painting a place regularly is that you really start to know the place and learn your subject. I also go to Cornwall and Norfolk each year to paint”

How has he found lockdown?

Karl says that he feels slightly embarrassed to say that he has enjoyed the lockdown. “I’ve missed social interaction with friends and family, but I have felt that painting has been like my salvation. My house is surrounded by woods and fields and my local farmer, Tim Piper, kindly gave me free access to paint wherever I liked. As a result I did a lot of pastoral scenes and spent days painting the bluebells in the woods. I definitely maintained social distancing and hardly saw any one at all. I also enjoyed making the most of having my teenage kids around as I realise this maybe the last year that I do”.

“During the lockdown I have posted much of what I have done on social media, mainly Instagram. The Rye Society of Artists has kindly re-posted most of it and I am surprised at how much interest that has generated. I have had an enormous amount of emails and messages of encouragement and lots of people have said how they have looked forward to and enjoyed seeing what I’ve done”. I have also managed to sell quite a lot of the work through through a dealer in Scotland (Dacre Art) who has been very proactive during this odd time.

Karl has exhibited widely across the globe, with a number of galleries in London, provincial towns and abroad. He is proud to be an associate member of the Royal Society of Marine Artists, the Wapping Group of Artists and the Rye Society of Artists. He can often be found painting with well-known and successful landscape painters of this generation.

Where to see Karl’s work

Whilst Karl paints mostly outside he also has a studio in the old village gaol in Wittersham that he opens by appointment. “I occasionally make much larger paintings in my studio using the ones I’ve done outside for reference. Here in the UK the weather is so changeable that its hard to take huge canvases into the landscape as everything changes so fast. That said I do occasionally try, but usually have to go back several times if the painting is larger than 20 x 30 in. I do work mostly in oil and I paint on board more than canvas as I find it sturdier and easier to transport”.

Karl’s contact details, and a further gallery of his wonderful images can also be seen on his website.

If you are a local artist and would like to be featured in Rye News, please email info@ryenews.org.uk.  Other artists featured previously in Rye News include: