Her work, she says, is “inspired by living by the sea and the natural world.  I also like people to use my pots hence my plates, bowls, mugs and vases for every day use”.

On her Facebook page Marian describes herself as follows:

“Potter and poet,
Not hired or fired
And happy to throw it;
Yes clay’s the stuff
That I throw on the wheel,
I can’t get enough,
It’s just how I feel”.

Marian started pottery 58 years ago and spent a year learning her art at Hastings College. She moved to Rye 10 years ago and went to Rosemary Crouch’s art centre and eventually set up her own studio in 2012 at Winchelsea Beach.

All her work is stoneware which is oven, microwave, dishwasher and frost  proof.  Enjoy some sample ceramics in the gallery below.

Many of you will know Marian through her open studio events which she runs twice year at her studio in Winchelsea Beach. Described by the Pett Level Independent Rescue Boat as “Our wonderful friend and supporter” Marian regularly raises funds for both PLIRB and St Michael’s Hospice. 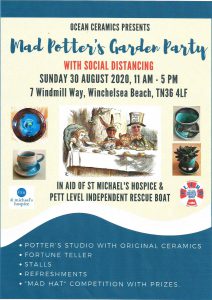 Her June open studio event has had to be postponed as a result of Covid-19, but she says “The Mad Potter’s Tea Party due in June has been transformed into The Mad Potter’s Garden Party and rescheduled for Sunday, August 30” – details on the poster.

“Pots will be for sale and Princess Aura will give consultations in the bower at least one and a half metres distance. The Mad Hat competition will be back with three prizes. All in aid of St Michael’s Hospice and the Pett Level Rescue Boat”.

Lockdown hasn’t been a problem for Marian as she has been using the time work on new ideas.  “I’ve been making a bower in the corner of my garden and the bower birds are a new feature in my collection. They are proving to be quite popular and I’ve had several commissions. Marian’s contact details, and more examples of her work can be found on her Facebook page

Marian is also a children’s author and has written a book called The Ghost of Camber Castle.which is available free of charge on Kindle.

If you’d like to take part in our featured artists column on the Culture pages, please email us on info@ryenews.org.uk