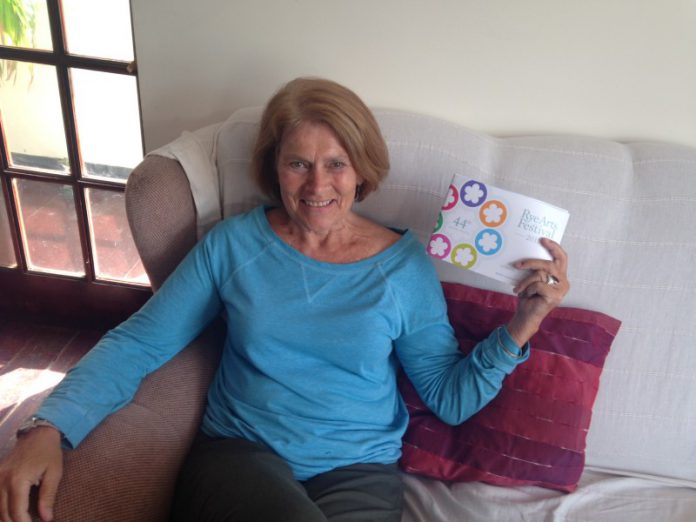 What a start to the Rye Festival, writes Heidi Foster (pictured above). At the launch last Friday September 11 in the Community Centre, The Hotfoot Specials kept us dancing with their music from Louisiana and it was just too tempting for many not to get onto the dance floor.

Saturday started with a more serious event at the Town Hall, a vigil arranged by Jack Ash to join in with a national day of action in other parts of the country, the message being: “Refugees are welcome in Rye”. I hope we can, if the time comes, make that a reality.

In the evening, definitely a treat – Mozart’s “Don Giovanni” in the Milligan Theatre with Euphonia, conducted and directed by Alisdair Kitchen. There seems to have been a mixed reaction to the set  but nothing hindered our admiration for the extraordinary talent of all the actors. The singing was superb, as was the orchestra, and the balance with each other brilliant. The duets were beautiful and emotional, and anyone who did not see it last Saturday, September 12, should try and get there Saturday week, September 26, at 6:30..

Sunday, about 20 of us attended the workshop with the Ukulele musician Del Rey. She was a gracious and patient teacher as it always difficult to include the various levels of all the players. I had not heard of her so I was amazed listening to her eclectic music at the free concert in The George when she played a variety of instruments spanning different genres of music.

To round off the week-end the very accomplished guitarist Manus Noble played a selection of lighter pieces (than his concert the next day in Playden church) at the Queens Head Pub. It was a lovely evening and enjoyed by the public who specially came to hear him.

I nearly forgot. In between the Sunday gems I went to the Kino cinema to attend “Derek Jarman Super 8/ Think Like an Artist”, with James Mackay (producer of 12 Jarman films) and Will Gompertz (BBC Arts Editor). I love Derek’s house and garden in Dungeness, and this offering was certainly different, but interesting.

Other events, like Wellington (Martin Wimbush’s one man play) , I did not get to – but heard it was a sell out, and people liked it very much.

I am looking forward to next week and the following weekend for more enjoyment, for instance the Belcea with Piatti String Quartets in St Mary’s on Thursday September 24 at 730 pm and “The Mad Lover” (music and words from the plays of John Fletcher) on Sunday September 27 at 6pm in the Kino, being otherwise engaged this coming weekend.

HOW MANY CHILDREN HAS THE TOWN GOT ?

Two children in railway carriages (pictured below) were just one of the unexplained bits in the procession which launched Rye Arts Festival a week ago, writes Charles Harkness, until you look at the Festival programme. Mozart’s opera “Don Giovanni“, at the Milligan Hall last Saturday and Saturday week is set aboard a vintage train – and the Studio School which has been helping with the opera’s sets, costumes and design also played a major part in the opening procession. As did cup cakes, which I think were meant to be given away, though the task of just balancing a tray of cakes seemed to be a full time occupation.

One worrying thought about the procession was the number of primary school children involved. Had extras been bussed in for the occasion ? Possibly not. Reports of a baby boom in Rye seem to be true, which is why the primary school is looking to cope with its expanding intake by using temporary classrooms.

In the meantime the temporary classrooms in Rye College’s car park since the fire in a science laboratory are on the move next week, with parking suspended between 8:30am and 6pm next Tuesday and Wednesday September 22 and 23 causing much head scratching as to where the parked cars are to go (a daily Rye problem !).

Rye Harbour is used to this sort of thing however with monster caravans/ park homes frequently navigating both the parked cars in the village and the bridge over the Brede – and sometimes bringing chaos to the town centre.

Despite some dismal weather literary events in the Lamb House Marquee seemed well sheltered from the elements writes Charles Harkness. The stage area was again enclosed with black drapes so anything on the screen was well visible, in addition to the speaker, and the floor (grass) was  covered with some very stout and probably mud proof matting.

The marquee is going to be well used as the Pocket Oxford Theatre Co is there this Saturday at 6pm, with Hamlet as you have probably never seen it before (Oh, yes you have : Oh no, you haven’t) and a Grown Ups Cabaret follows a week later (slightly darker). For more details see Miss Rae’s Rye column.

The East Street Museum’s special “Waterloo” exhibition is open throughout the Arts Festival (September 12-27, 1030-430 each day) and was opened by Peter Mackenzie Smith, shown above cutting the tape for the Museum’s Jo Kirkham. The Cinque Ports Volunteers (pictured below) were also on hand to publicise the exhibition which includes a history of the volunteers (now a historical re-enactment group) and the part they have played in re-creations of the Battle of Waterloo, 200 years ago.

The Volunteers (think “Dad’s Army, writes Charles Harkness) were first formed in 1794 and in 1809 became the Cinque Ports Militia. A naval equivalent, active in the Napoleonic period, was called the Sea Fencibles.

The Battle of Waterloo is portrayed in the museum by a series of tableaux using toy soldiers to track the main stages in the battle, which ebbed and flowed with one side, and then the other, gaining temporary advantages. The principal stages were :

This weekend the New Road Artists will be opening up their studios and talking about their work as part of the Arts Festival along with an accompanying exhibition in the Rye Creative Centre’s Gallery (also in New Road). Painting, print making, photography, textiles, sculpture, illustrations and more will be on display and for sale. There is a Private View Friday evening September 19 between 6 and 8pm, and the studios are open Saturday 10am-5pm, with the exhibition running from September 19-27, Monday to Friday, 10am-3pm.

This Saturday, September 19, the artists will be giving 20 minute talks about their work in their studios with Nick Archer (11am), Jenny Edbrooke (12 noon), Christine Hopwood (1pm), Angelika Howard (2pm), Caroline Fraser (3pm) and Jillian Eldridge (4pm) – and the cafe will be serving tea, coffee and cakes all day, (Source: Rye Creative Centre) Another exhibition running through the Festival – and on to October 25 is “Face the front” with work by Robert Sample, Lucy Sedgewick, Matt Hardman, Rachel Glittenberg, Victoria Kiff, Daryl Balcombe and Alex Thornton at the Rye Art Gallery, open 10.30-5, and Sundays and Bank Holidays 12-4. For more information, please see “Miss Rae”

CUTTING BACK THE BODY COUNT

Softly spoken national newspaper journalist Jamie Doward (from the Observer) was the Festival’s first literary speaker (in the Mermaid) and he talked about his novel “Toxic” which starts with a banker’s mutilated body apparently washed ashore on a Dungeness beach.

Jamie loves to run, as he said it set his mind buzzing, but he sometimes has to retrace his steps.”Similar novels don’t have the same body count” he said and in his early drafts everyone died because he thought the book would just be a one-off. However if there to be more books, he had to go back, edit and revive the dead.

Nevertheless the body count is still high and Dungeness features strongly in his saga of dodgy bankers and the possibly dodgier world of secret agents – but after the bank crash, the collapse of Lehman Brothers , and the rescue of other banks here and in the U.S, who is to say who is the dodgier.

However, saying any more might give away the plot – which has all the twists and turns a thriller needs. The bleak empty landscape of Dungeness clearly attracts him though. “There is so much great stuff there”, he said. But he is also fascinated with the financial world and its impact on relations between the UK and the USA. “The market is not the sum of all knowledge”, he said, and – as the “Toxic” cover says, sometimes banks are more deadly than bombs.