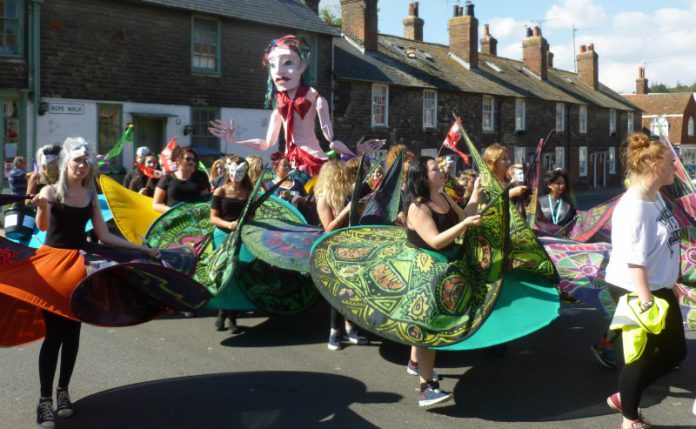 The Arts Festival started (officially) with a parade through the town by Rye schoolchildren and teenagers, led by a noisy band and dominated by three huge puppets – just like the Festival of La Merce in Barcelona in September which celebrates the end of summer.

In Catalan the giants are called “Gegants and Capgrossos”, though elsewhere in Spain and South America they are called “gigantes y cabezudos”; and these puppets (or often large plaster statues) can be found in processions in many parts of the world – often with a strong religious symbolism.

Led by the drummers of Rye Blocco, the three giant puppets, and lots of dancers in costumes and masks, the procession went round the town to the East Street Museum and the Town Hall, and then back down Lion Street and along the High Street.

Finally the procession meandered back to the station, where a combo of student musicians played some cracking songs to mark the end of the grand parade.