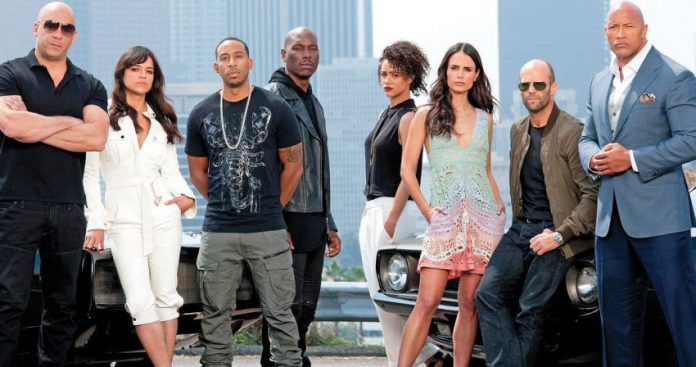 Fast & Furious 8  [12A] 136 mins
With Dom and Letty married, Brian and Mia retired and the rest of the crew exonerated, the globe-trotting team has found some semblance of a normal life. They soon face an unexpected challenge when a mysterious woman named Cipher forces Dom to betray them all. Starring Vin Diesel, Dwayne Johnson, Michelle Rodriguez, Charlize Theron and Helen Mirren.

Life [15] 104 mins
As a six-member crew begins to conduct research on whether there is extra-terrestrial life on Mars, their methods end up having unintended consequences – the life form proves more intelligent than anyone ever expected. Starring Rebecca Ferguson, Jake Gyllenhaal and Ryan Reynolds.

Their Finest [12A] 117 mins
With London emptied of men now fighting at the Front, Catrin Cole lands herself a job writing copy for propaganda films that need “a woman’s touch”. Her natural flair quickly gets her noticed by dashing movie producer Buckley whose path would never have crossed hers in peacetime. As bombs are dropping all around them, Catrin discovers there is as much drama, comedy and passion behind the camera as there is on screen. Starring Gemma Arterton, Sam Claflin, Bill Nighy, Jack Huston and Richard E Grant.

The Sense of an Ending [15] 109 mins
Tony Webster leads a reclusive and quiet existence until long buried secrets from his past force him to face the flawed recollections of his younger self, the truth about his first love and the devastating consequences of decisions made a lifetime ago. From acclaimed director Ritesh Batra (The Lunchbox), this is a deeply moving and uplifting story about the paths chosen in life. Starring Jim Broadbent, Harriet Walter, Michelle Dockery, Emily Mortimer, Matthew Goode and Charlotte Rampling.

Another Mother’s Son [12A] 103 mins
Set during the Second World War in Jersey after the island falls into occupied hands, this is the true story of Louisa Gould who plays a dangerous game of cat and mouse to keep a Russian soldier safe from harm after he escapes from a labour camp, refusing to believe that the wider community will betray her. Starring Jenny Seagrove, John Hannah and Ronan Keating. The Boss Baby 2D [U] 97 mins
The Boss Baby is a most unusual baby. He wears a suit and speaks with the voice and wit of Alec Baldwin. This is the story about how a new baby’s arrival impacts a family, told from the point of view of a delightfully unreliable narrator, a wildly imaginative seven year-old named Tim. From DreamWorks Animation and the director of Madagascar.

National Theatre Encore:  Rosencrantz and Guildenstern are Dead, Thursday May 4, 7pm.
Daniel Radcliffe (Harry Potter, The Woman In Black), Joshua McGuire (The Hour) and David Haig (Four Weddings And A Funeral, The Witness For The Prosecution) star in Tom Stoppard’s brilliantly funny situation comedy, broadcast live from The Old Vic Theatre in London. David Leveaux’s new production marks the 50th anniversary of the play that made a young Tom Stoppard’s name overnight.
Against the backdrop of Hamlet, two hapless minor characters, Rosencrantz and Guildenstern, take centre stage. As the young double-act stumble their way in and out of the action of Shakespeare’s iconic drama, they find themselves increasingly out of their depth as their version of the story unfolds.

Michelangelo – Love And Death plus Q&A with Phil Grabsky, Monday June 19, 8pm
The spectacular sculptures and paintings of Michelangelo seem so familiar to us, but what do we really know about this renaissance genius? Who was this ambitious and passionate man? A virtuoso craftsman, Michelangelo’s artistry is evident in everything he touched. Spanning his 89 years, Michelangelo – Love and Death takes a cinematic journey from the print and drawing rooms of Europe, through the great chapels and museums of Florence, Rome and the Vatican to explore the tempestuous life of Michelangelo. Through expert commentary and Michelangelo’s own words, this film takes a fresh look at an enigmatic man whose life is celebrated in every mark and every stroke he made.

Kino Special: The Battle Of Hastings: A film about the Eleventh (2015) Hastings International Piano Concerto Competition plus Q and A with Director Mike Figgis (U) 120mins; Sunday May 7 at 5.45pm. All tickets £20 which includes a regular glass of wine and nibbles.
The Hastings International Piano Concerto Competition is one of the UK’s fastest-growing premier piano competitions for international young pianists. The 2015 competition welcomed 38 young pianists from 30 different countries. Taking place at The White Rock Theatre in Hastings, East Sussex the annual competition culminated in a final with the Royal Philharmonic Concert Orchestra. Director Mike Figgis is an English film director, screenwriter, and composer. He was nominated for two Academy Awards for his work in Leaving Las Vegas (1995).

National Theatre Live: Obsession. Screening live from the Barbican Theatre at 7pm on Thursday, May 11
Jude Law stars in the stage production of Obsession, broadcast live from the Barbican Theatre in London. Ivo van Hove (NT Live: A View from the Bridge, Hedda Gabler) directs this new stage adaptation of Luchino Visconti’s 1943 film.
Gino is a drifter, down-at-heel and magnetically handsome. At a roadside restaurant he encounters husband and wife, Giuseppe and Giovanna. Irresistibly attracted to each other, Gino and Giovanna begin a fiery affair and plot to murder her husband. But in this chilling tale of passion and destruction the crime serves only to tear them apart.

Royal Shakespeare Company Live: Antony And Cleopatra, 210 mins. Live from Stratford-upon-Avon on Wednesday May 24 at 7pm.
Following Caesar’s assassination, Mark Antony has reached the heights of power. Now he has neglected his empire for a life of decadent seduction with his mistress, Cleopatra, Queen of Egypt. Torn between love and duty, Antony’s military brilliance deserts him, and his passion leads the lovers to their tragic end. Iqbal Khan returns to the RSC to direct, following his critically acclaimed productions of Othello (2015) and Much Ado About Nothing (2012). Starring Antony Byrne and Josette Simon in the title roles.

Kino Music Live: Take That: Wonderland Live From The O2, 120mins; Friday, June 9, 8pm
Take That invite you to experience their Wonderland concert LIVE from the O2 for one night only. Britain’s most loved and successful live act are known for their spectacular, colourful and imaginative shows. This year is no exception as Gary, Mark and Howard are performing in the round for the first time ever. Take That are sure to deliver a unique and unforgettable cinematic experience – get ready for it!

La Traviata, Monday June 12, at 6.15pm
One of the world’s best-loved operas, captured live in 2014 at Glyndebourne returns to cinemas. Verdi’s masterpiece is a tale of love in the face of death. Violetta is played by Bolshoi-star Venera Gimadieva, with American tenor Michael Fabiano as Alfredo and  Tassis Christoyannis as his father, Giorgio Germont. The production is directed by Tom Cairns and ‘exquisitely conducted’ (The Daily Telegraph) by Mark Elder who leads the London Philharmonic Orchestra.

La Clemenza Di Tito. LIVE from Glyndebourne, Thursday August 3, at 6pm
Spurned by Tito, Vitellia seeks revenge. Besotted Sesto agrees to avenge her as a token of his love, but all does not go to plan. Mozart’s opera, loosely based on the life of the Roman Emperor Titus, delivers all of the sublime musical beauty and heart-tugging humanity we expect of him. Australian tenor Steve Davislim makes his Glyndebourne debut as Tito, with Alice Coote as Vitellia and Kate Lindsey as Sesto.