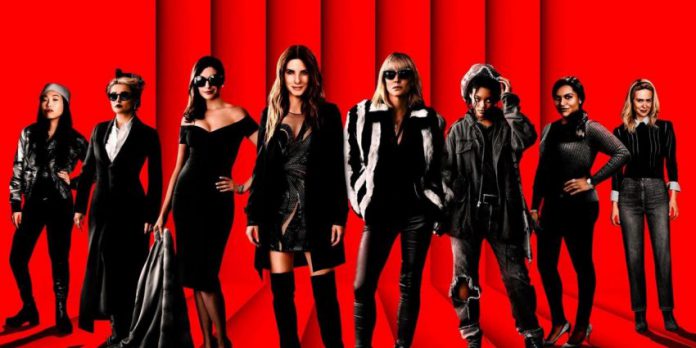 Films showing from Friday June 22 at the Kino, Rye

Ocean’s 8 [12A] 110 mins
Five years, eight months, 12 days and counting – that’s how long Debbie Ocean has been devising the biggest heist of her life. She knows what it’s going to take – a team of the best people in the field, starting with her partner-in-crime Lou Miller. Together they recruit a crew of specialists, including jeweller Amita, street con Constance, suburban mom Tammy, hacker Nine Ball, and fashion designer Rose. Their target – a necklace that’s worth more than $150 million. Starring Sandra Bullock, Cate Blanchett, Anne Hathaway, Mindy Kaling, Sarah Paulson, Awkwafina, Rihanna, Helena Bonham Carter, Richard Armitage and Elliott Gould.
The Happy Prince [15] 105 mins
Written, directed by and starring Rupert Everett, this is the tragic story of the last days of Oscar Wilde. Once one of the most famous authors in England, in a series of flashbacks, hallucinations and memories he observes his own failure with ironic distance and regards the difficulties that beset his life with detachment and humour. Also starring Colin Firth, Colin Morgan, Emily Watson, Edwin Thomas and Tom Wilkinson.
Book Club [12A] 104 mins
Diane is recently widowed after 40 years of marriage. Vivian enjoys her men with no strings attached. Sharon is still working through a decades-old divorce. Carol’s marriage is in a slump after 35 years. Four lifelong friends’ lives are turned upside down to hilarious ends when their book club tackles the infamous Fifty Shades of Grey. Starring Diane Keaton, Jane Fonda, Mary Steenburgen, Candice Bergen, Don Johnson, Andy Garcia and Richard Dreyfuss.
Deadpool 2 [15] 104 mins
Wisecracking mercenary Deadpool joins forces with three mutants – Bedlam, Shatterstar and Domino – to protect a boy from the all-powerful Cable as well as finding a new taste for adventure and earning the coveted coffee-mug title of World’s Best Lover. Starring Ryan Reynolds, Josh Brolin, Morena Baccarin and Ed Skrein. Peter Rabbit [PG] 95 mins
Peter Rabbit and his three sisters enjoy spending their days in Mr McGregor’s vegetable garden but when one of McGregor’s relatives moves in, he’s less than thrilled to discover a family of rabbits in his new home.
This runs for the first film at weekends and at various other times (see quick-view listings page).
Great children’s films for just £8 and for every child ticket bought, an adult goes free. Grab a Kids’ Club loyalty card, have it stamped five times and get your sixth ticket free.
For further information and booking visit Kino Rye or check the quick-view listings page.
For Kino theatre shows and special events see Let’s go to a show!