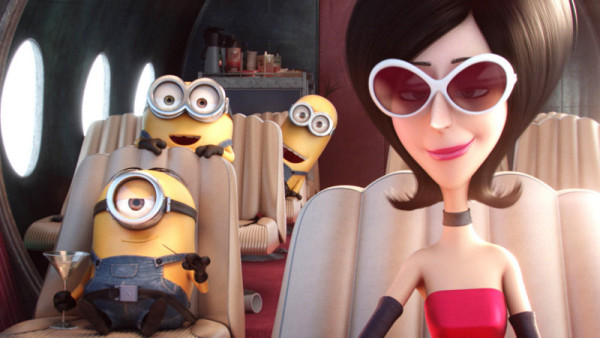 Showing at the Rye Kino from 10th July include :

Minions (2D) & (3D) [U] 90 mins   The story of the Minions begins at the dawn of time. Starting as single-celled yellow organisms, Minions evolve through the ages, perpetually serving the most despicable of masters. But one Minion named Kevin has a plan, and he – alongside teenage rebel Stuart and lovable little Bob – ventures out into the world to find a new evil boss for his brethren to follow. The trio embark on a thrilling journey that leads them to the world’s first-ever female super-villain and their biggest challenge to date: saving all of Minionkind from annihilation. With the voices of Sandra Bullock, Jon Hamm, Michael Keaton, Jennifer Saunders and Steve Coogan.

Slow West [15] 83 mins   Set at the end of the 19th Century, Slow West follows the story of sixteen-year-old Jay Cavendish as he journeys across the American Frontier in search of the woman he loves, accompanied by a mysterious traveller named Silas who agrees to protect him – for a price. Jay’s quest will be one of double-crossing, violence and peril as the guileless adolescent learns that the West takes no pity, least of all on the innocent. Starring Michael Fassbender, Kodi Smit-McPhee and Ben Mendelson.

She’s Funny that Way [12A] 92 mins  Young Hollywood starlet Isabella recalls how the actions of charming Broadway director, Arnold, changed her life forever. A classic-style romantic comedy with touches of screwball and a sprinkling of terrific cameos from Cybill Shepherd, Joanna Lumley and Quentin Tarantino, the former escort reminisces to a reporter about her rags to riches fairy tale – a chain of events affecting the lives of everyone involved, including Arnold’s wife Delta, leading man Seth, playwright Joshua and even Isabella’s therapist, Jane (Jennifer Aniston). Directed by Peter Bogdanovich (The Last Picture Show, What’s Up Doc) and starring Imogen Poots, Owen Wilson, Rhys Ifans and Will Forte.

This year marks the centenary of Orson Welles; a colossal figure within cinematic history, both behind and in front of the camera.

Frequently hailed as one of the greatest films ever made, this classic thriller (pictured above) showcases director Carol Reed and screenwriter Graham Greene’s talents in a digitally restored version celebrating the centenary of Orson Welles. Holly Martins, a third-rate American pulp novelist, arrives in postwar Vienna to discover that his contact, Harry Lime, has been killed in a traffic accident and that his funeral is taking place immediately. But he soon suspects that the man lying in the coffin is not Harry Lime at all. Starring Joseph Cotten, Alida Valli, Orson Welles and Trevor Howard.

All tickets £10.00 including a regular glass of wine, coffee or soft drink.

Great children’s films for only £6.50 and for every child ticket bought an adult goes free!  Runs first film at weekends. Grab a Kids Club loyalty card, have it stamped five times and get your 6th ticket free!