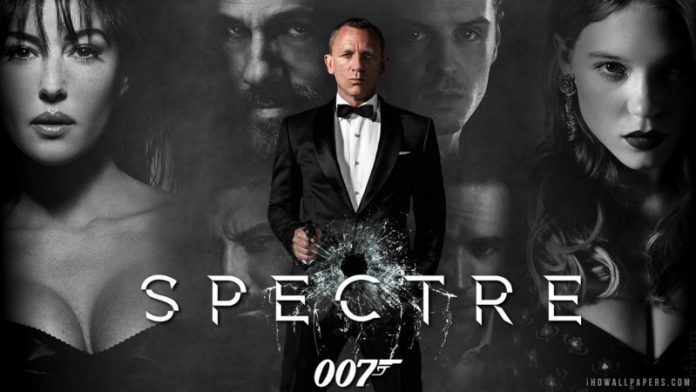 Movies showing in Rye from Friday October 23 include:

Spectre [12A] 150 mins  007’s back!  A cryptic message from Bond’s past sends him on a trail to uncover a sinister organisation. While M battles political forces to keep the secret service alive, Bond peels back the layers of deceit to reveal the terrible truth behind Spectre. Starring Daniel Craig, Christoph Waltz, Léa Seydoux, Ben Whishaw, Naomie Harris, David Bautista, Monica Bellucci and Ralph Fiennes as ‘M’.

Due to the terms and conditions stipulated by Sony Pictures Releasing, Kino’s 2-for-1 Tuesday or Rye Market Day Special ticket promotions do not apply to Spectre tickets.

The Walk (2D) & (3D) [PG] 123 mins  Only one man – Philippe Petit – has ever, or will ever, walk in the immense void between the World Trade Centre towers. Guided by his mentor and aided by an unlikely band of international recruits, Petit and his gang overcome long odds, betrayals, dissension and countless close calls to conceive and execute their mad plan. Robert Zemeckis (Forrest Gump, Cast Away and Back to the Future) uses advanced technology with innovative photorealistic techniques to viscerally experience the feeling of reaching the clouds. Starring Joseph Gordon-Levitt, Ben Kingsley and Charlotte Le Bon.

Maze Runner: the Scorch Trials [12A] 131 mins  In this next chapter of the epic ‘Maze Runner’ saga, Thomas and his fellow Gladers face their greatest challenge yet: searching for clues about the mysterious and powerful organisation known as WCKD. Their journey takes them to the Scorch, a desolate landscape filled with unimaginable obstacles. Teaming up with resistance fighters, the Gladers take on WCKD’s vastly superior forces and uncover its shocking plans for them all. Starring Dylan O’Brien, Aidan Gillen, Kaya Scodelario and Thomas Brodie-Sangster.

The Martian (2D) & (3D) [12A] 141 mins   During a manned mission to Mars, Astronaut Mark Watney (Matt Damon) is presumed dead after a fierce storm and left behind by his crew. But Watney has survived and finds himself stranded and alone on the hostile planet. With meagre supplies, he must draw upon his ingenuity, wit and spirit to subsist and find a way to signal to Earth that he is alive. Millions of miles away, NASA and a team of international scientists work tirelessly to bring “the Martian” home. Directed by Ridley Scott and starring Jessica Chastain, Kristen Wiig, Kate Mara, Jeff Daniels and Chiwetel Ejiofor.

The Intern [12A] 121 mins   Robert De Niro stars as Ben Whittaker, a 70-year-old widower who has discovered that retirement isn’t all it’s cracked up to be. Seizing an opportunity to get back in the game, he becomes a senior intern at an online fashion site, founded and run by Jules Ostin (Anne Hathaway). A gentle and heart-warming comedy written and directed by Nancy Meyers (It’s Complicated, The Holiday, Something’s Gotta Give, Private Benjamin), also starring Rene Russo and Adam DeVine. Hotel Transylvania 2 [U] 89 mins  The Drac pack is back for an all-new monster comedy adventure. Everything seems to be changing for the better at Hotel Transylvania. Dracula’s rigid monster-only hotel policy has finally relaxed, opening up its doors to human guests. But behind closed coffins, Drac is worried that his adorable half-human, half-vampire grandson, Dennis, isn’t showing signs of being a vampire. So Drac enlists his friends to put Dennis through a “monster-in-training” boot camp. But little do they know that Drac’s grumpy dad Vlad is about to pay a family visit to the hotel. And when Vlad finds out that his great-grandson is not a pure blood – and humans are now welcome at Hotel Transylvania – things are going to get batty! With the voices of Adam Sandler, Selena Gomez and Steve Buscemi.

Special events at the Rye Kino to look forward to include:

Ed Sheeran: Jumpers for Goalposts [12A] 180 mins  Friday October 23 at 19:00  Bringing together Ed’s captivating performances from the biggest shows of his career at Wembley Stadium in July 2015, where he wowed the 80,000 strong crowd with hits such as “The A Team”, “Sing” and “Thinking Out Loud” – there’s even a surprise duet with Sir Elton John – intercut with the story of Ed’s triumphant road to Wembley, presenting a revealing and personal glimpse into life backstage and on the road, along with an honest and intimate reflection by Ed on just how far he has come.

Rugby World Cup 2015  Catch all the action from the Rugby World Cup on the big screen in the Silver Room at Kino Rye!  Entry is free, but seating is subject to availability so make sure you arrive early! Grab a drink from the fine selection of beers, ales, ciders and wines and treat yourself to something from the delicious menu.

Film Quiz   Thursday November 12 at 7:30pm in the Silver Room at Kino Rye.  £6.50 entry per person which includes a light supper prepared by the excellent catering team. Teams of maximum four people. The prize for each member of the winning team is a cinema ticket, a main course from our Kino Rye menu and a drink. Booking in advance only – online, by phone or in person – from 2pm Monday October 26. Seats are limited, so book early!

Western Weekend   In the Silver Room at Kino Rye. £10 per person which includes two regular drinks and free entry to any of the screenings. Seats must be booked in advance and are subject to availability at time of booking. Normal ticket conditions apply. Sunday November 8 at 4:45pm: The Searchers [U] 113mins (starring John Wayne pictured above)

Of Mice and Men [12A]  Thursday November 19  at 7pm.  The hit Broadway production filmed on stage in New York by National Theatre Live starring James Franco and Chris O’Dowd. This landmark revival of Nobel Prize winner John Steinbeck’s play is a powerful portrait of the American spirit and a heart-breaking testament to the bonds of friendship. Directed by Anna D  Shapiro (Broadway’s August: Osage County), also starring Leighton Meester and Jim Norton.  Booking at Rye Kino from 11am on Friday October 23  Running time approximately 140 minutes.

Four short ballets  LIVE: Thursday November 12 at 7:15pm Enjoy four short ballets in one evening with this quadruple program from The Royal Ballet. Carlos Acosta focuses on the dramatic essentials of love, jealousy and revenge in his new production of Carmen; Liam Scarlett has used Lowell Liebermann’s thrilling Piano Concerto No.1 as the inspiration for his similarly audacious choreography in Viscera; Debussy’s evocative score is the inspiration for Jerome Robbins’s Afternoon of a Faun; George Balanchine’s Tchaikovsky pas de deux uses a fragment of music composed for the 1877 production of Swan Lake for an eight-minute display of ballet bravura and technique. The programme stars Marianella Nunez, Carlos Acosta, Federico Bonelli, Laura Morera, Ryoichi Hirano, Sarah Lamb, Natalia Osipova and Steven McRae.  Booking at Rye Kino from 11am Friday October 23.

The Winters Tale [12A]  LIVE: Thursday  November 26 at 7:15pm  ENCORE: Sunday  November 29 at 2:15pm  The first season of the Kenneth Branagh Theatre Company Live promises an exceptional series of plays broadcast to cinemas from London’s Garrick Theatre over the course of a year. Shakespeare’s timeless tragicomedy of obsession and redemption is reimagined in a new production co-directed by Rob Ashford and Kenneth Branagh, following their triumphant staging of Macbeth in Manchester and Manhattan. Starring Judi Dench as Paulina, Tom Bateman, Jessie Buckley, Hadley Fraser, Miranda Raison and Kenneth Branagh as Leontes.  Booking at Rye Kino from 11am,  Friday October 23.  Running time approximately 210 minutes.

Just the ticket to take our minds off Covid

Another loss for Rye