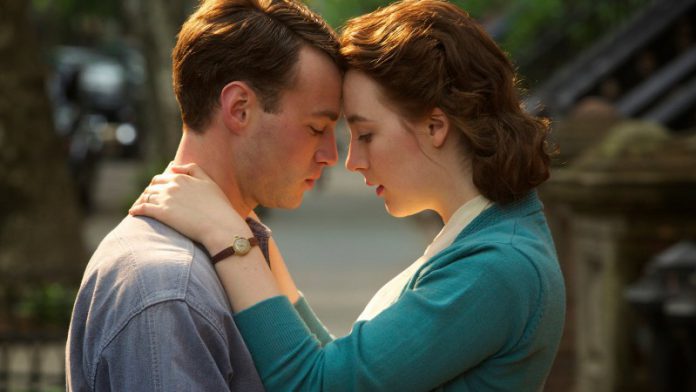 Movies and events at Rye Kino from Friday November 20 include:

Brooklyn [12A] 112 mins  The profoundly moving story of Eilis Lacey, a young Irish immigrant navigating her way through 1950s Brooklyn. Lured by the promise of America, Eilis departs Ireland and the comfort of her mother’s home for the shores of New York City. The initial shackles of homesickness quickly diminish as a fresh romance sweeps Eilis into the intoxicating charm of love. But her new vivacity is disrupted by her past, and Eilis must choose between two countries and the lives that exist within. Starring Saoirse Ronan, Domhnall Gleeson, Emory Cohen, Jim Broadbent and Julie Walters.

Suffragette [12A] 106 mins . Inspired by true events, Suffragette is a moving drama exploring the passion and heartbreak of those who risked all they had for women’s right to vote – their jobs, their homes, their children and even their lives. The stirring story centres on Maud, a working wife and mother whose life is changed forever when she secretly joins the growing suffragette movement. Galvanised by Emmeline Pankhurst, Maud becomes an activist for the cause alongside women from all walks of life, engaging in a dangerous game of cat-and-mouse with the authorities as the women’s civil disobedience escalates and sparks debate across the nation. Carey Mulligan, Helena Bonham Carter and Meryl Streep lead the cast of this powerful film directed by BAFTA award winner Sarah Gavron from an original screenplay by Abi Morgan. Also starring Ben Whishaw, Anne-Marie Duff, Brendan Gleeson and Romola Garai.

Due to the terms and conditions stipulated by Sony Pictures Releasing, Kino’s 2-for-1 Tuesday or Rye Market Day special ticket promotions do not apply to Spectre tickets. Ghosthunters [PG] 99 mins   When the often-fearful eleven-year-old Tom (Milo Parker – Mr Holmes) discovers a slimy green ghost in his cellar called Hugo, he is understandably afraid. However, Tom soon realises that Hugo, who is an ASG (Averagely Spooky Ghost), is not only completely harmless but also desperately in need of his help – a dangerous AIG (Ancient Ice Ghost) is spreading an arctic cold over the entire town in the middle of summer! Will they defeat the evil Ancient Ice Ghost to save the town from an icy end?

The Winter’s Tale [12A]  LIVE: Thursday  November 26 at 19:15  ENCORE: Sunday November 29 at 14:15.  The first season of the Kenneth Branagh Theatre Company Live promises an exceptional series of plays broadcast to cinemas from London’s Garrick Theatre over the course of a year. Shakespeare’s timeless tragicomedy of obsession and redemption is reimagined in a new production co-directed by Rob Ashford and Kenneth Branagh, following their triumphant staging of Macbeth in Manchester and Manhattan. Starring Judi Dench as Paulina, Tom Bateman, Jessie Buckley, Hadley Fraser, Miranda Raison and Kenneth Branagh as Leontes.  Running time approximately 210 minutes.

The Mikado  LIVE: Thursday December 3  at 19:30  English National Opera’s spectacular production of Gilbert and Sullivan’s The Mikado is a popular hit with audiences of all ages. Experience the irresistible combination of wonderful wit, memorable melodies and hilarious antics in this acclaimed production from Jonathan Miller. Distinguished bass Robert Lloyd sings the role of the Mikado with Richard Suart as Ko-Ko and Mary Bevan and Anthony Gregory as the lovers Yum-Yum and Nanki-Poo.

May the Force be with you! After an absence of ten years, Star Wars returns to the big screen as visionary director JJ Abrams takes us back to a galaxy far, far away, 30 years after the events of Return of the Jedi. To mark the occasion, Kino Hawkhurst and Kino Rye will be holding a special opening night event on Thursday December 17  from 7pm.

Tickets cost £22. which includes a specially mixed Star Wars cocktail or glass of prosecco, canapes and, of course, your cinema seat. . . and feel free to dress up for the occasion!

Tickets for the opening night will go on sale at 2pm on Monday November 23 online, by phone and in person, and are subject to availability at time of booking.

Tickets for screenings of Star Wars: The Force Awakens at Kino Hawkhurst and Kino Rye will also go on sale at 2pm on Monday November 23 online, by phone and in person.

Expected certification 12A with a running time to be confirmed of approximately 140 minutes.

We expect very high demand for tickets when booking opens and would recommend that all customers book online if possible. To register to book online, please click here.