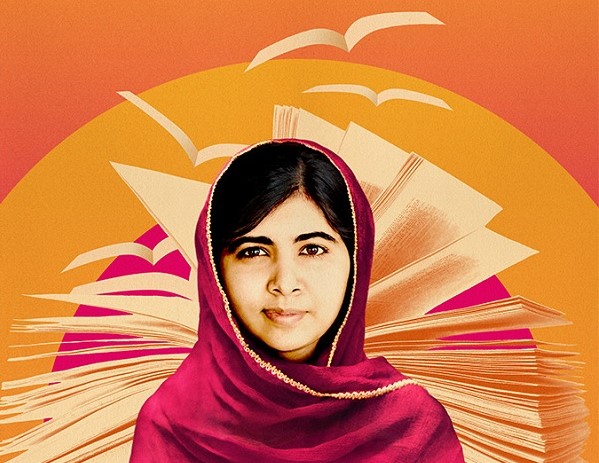 Movies and events at Rye Kino from Friday November 27 include:

He Named me Malala [PG] 87 mins  An intimate portrait of Malala Yousafzai, who was wounded when Taliban gunmen opened fire on her school bus in Pakistan’s Swat Valley. The then 15-year-old teenager, who had been targeted for speaking out on behalf of girls’ education in her region, was shot in the head, sparking international media outrage. An educational activist in Pakistan, Yousafzai has since emerged as a leading campaigner for the rights of children worldwide and in December 2014, became the youngest-ever Nobel Peace Prize Laureate. From Oscar-winning film-maker Davis Guggenheim (An Inconvenient Truth).

Brooklyn [12A] 112 mins  The profoundly moving story of Eilis Lacey, a young Irish immigrant navigating her way through 1950s Brooklyn. Lured by the promise of America, Eilis departs Ireland and the comfort of her mother’s home for the shores of New York City. The initial shackles of homesickness quickly diminish as a fresh romance sweeps Eilis into the intoxicating charm of love. But her new vivacity is disrupted by her past, and Eilis must choose between two countries and the lives that exist within. Starring Saoirse Ronan, Domhnall Gleeson, Emory Cohen, Jim Broadbent and Julie Walters. Paper Planes [U] 97 mins   A comedy drama about a young boy who discovers that he has a talent for making paper aeroplanes. Twelve-year-old Dylan travels to Japan to compete in the world paper plane championships where he meets the junior Japanese champion Kimi. Developing a close bond, they challenge each other to create a plane that has never been seen before. Starring Sam Worthington and Ed Oxenbould.

May the Force be with you! After an absence of ten years, Star Wars returns to the big screen as visionary director JJ Abrams takes us back to a galaxy far, far away, 30 years after the events of Return of the Jedi. To mark the occasion, Kino Hawkhurst and Kino Rye will be holding a special opening night event on Thursday December 17  from 7pm.

Tickets cost £22. which includes a specially mixed Star Wars cocktail or glass of prosecco, canapes and, of course, your cinema seat . . . and feel free to dress up for the occasion!

Expected certification 12A with a running time to be confirmed of approximately 140 minutes.The Kino expects very high demand for tickets when booking opens and would recommend that all customers book online if possible. To register to book online, please click here.

The Mikado  LIVE: Thursday December 3  at 7:30pm. English National Opera’s spectacular production of Gilbert and Sullivan’s The Mikado is a popular hit with audiences of all ages. Experience the irresistible combination of wonderful wit, memorable melodies and hilarious antics in this acclaimed production from Jonathan Miller. Distinguished bass Robert Lloyd sings the role of the Mikado with Richard Suart as Ko-Ko and Mary Bevan and Anthony Gregory as the lovers Yum-Yum and Nanki-Poo.

Goya – Visions of Flesh and Blood  Sunday December 6 at 2pm. Francisco Goya is Spain’s most celebrated artist and considered the father of modern art – a gifted portrait painter and social commentator par excellence. Goya takes the genre of portraiture to new heights and his genius is reappraised in a landmark exhibition at The National Gallery, London. Through a great collection of unique works and Goya’s letters, we reflect upon the man himself and the world he painted.

Jane Eyre [12A]  LIVE: Tuesday December 8 at 7pm.  This bold and dynamic production uncovers one woman’s fight for freedom and fulfilment on her own terms. From her beginnings as a destitute orphan, Jane Eyre’s spirited heroine faces life’s obstacles head-on, surviving poverty, injustice and the discovery of bitter betrayal before taking the ultimate decision to follow her heart. This acclaimed re-imagining of Brontë’s masterpiece was first staged by the Bristol Old Vic last year, and now Director Sally Cookson brings her celebrated production to the National, presented as a single, exhilarating performance.

Cavalleria Rusticana and Pagliacci  LIVE: Thursday December 10 at 7:15pm  These two short Italian operas are each regarded as the composers’ Pietro Mascagni and Ruggero Leoncavallo’s masterpieces. Brought together in a new staging by award-winning director Damiano Michieletto who sets them in a poverty stricken village in 1980s southern Italy where the Mafia has a hold. Antonio Pappano conducts a cast that includes charismatic Dutch soprano Eva-Maria Westbroek, exciting Italian soprano Carmen Giannattasio and the thrilling Latvian tenor Aleksandrs Antonenko with Dimitri Platanias.