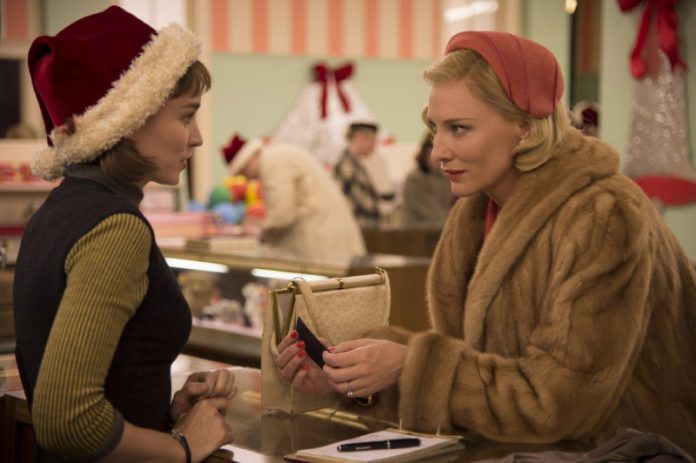 Movies and events at Rye Kino from Friday December 11 include:

Carol [15] 119 mins  Set in 1950s New York, a young woman working in a department store falls for an older woman trapped in a loveless but convenient marriage. What follows is a beautiful love story with complicated consequences. Based on the novella by Patricia Highsmith, this highly-acclaimed film stars Cate Blanchett and Rooney Mara with Sarah Paulson and Kyle Chandler.

Pan (2D) [PG] 111 mins   Peter is a mischievous 12-year-old boy who is spirited away from his orphanage to a fantastical world of pirates, warriors and fairies called Neverland. There he finds amazing adventures, meets new friends Tiger Lily and James Hook and fights life-or-death battles with the ruthless pirate Blackbeard to save Neverland and discover his true destiny – to become the hero who will forever be known as Peter Pan. A magical family film starring Hugh Jackman, Garrett Hedlund, Rooney Mara, Levi Miller, Amanda Seyfried, Cara Delevingne and Kathy Burke.

The Hunger Games: Mockingjay Part 2 [12A] 137 mins  The final showdown. With the nation of Panem in a full-scale war, Katniss confronts President Snow. Teamed with a group of her closest friends – including Gale, Finnick and Peeta – they risk their lives to liberate the citizens of Panem, but the mortal traps, enemies, and moral choices that await Katniss will challenge her more than any arena she faced in The Hunger Games. Starring Jennifer Lawrence, Liam Hemsworth, Sam Claflin, Donald Sutherland, Elizabeth Banks, Natalie Dormer and Julianne Moore. The best known Christmas story of all time with Michael Caine playing the old miser Scrooge with Kermit as his long-suffering but ever-hopeful employee Bob Cratchit, Miss Piggy as Cratchit’s wife and a host of Muppets.

May the Force be with you! After an absence of ten years, Star Wars returns to the big screen as visionary director JJ Abrams takes us back to a galaxy far, far away, 30 years after the events of Return of the Jedi. To mark the occasion, Kino Hawkhurst and Kino Rye will be holding a special opening night event on Thursday December 17 from 7pm.

Tickets cost £22, which includes a specially mixed Star Wars cocktail or glass of prosecco, canapes and, of course, your cinema seat . . . and feel free to dress up for the occasion!

Expected certification 12A with a running time to be confirmed of approximately 140 minutes.The Kino expects very high demand for tickets when booking opens and would recommend that all customers book online if possible. To register to book online, please click here.

The Winter’s Tale [12A]  ENCORE: Thursday January 7 at 7:15pm  The first season of the Kenneth Branagh Theatre Company Live promises an exceptional series of plays broadcast to cinemas from London’s Garrick Theatre over the course of a year. Shakespeare’s timeless tragicomedy of obsession and redemption is reimagined in a new production co-directed by Rob Ashford and Kenneth Branagh, following their triumphant staging of Macbeth in Manchester and Manhattan. Starring Judy Dench as Paulina, Tom Bateman, Jessie Buckley, Hadley Fraser, Miranda Raison and Kenneth Branagh as Leontes.

Rhapsody / The two Pigeons  LIVE: Tuesday January 26 at 7:15pm  This delightful Frederick Ashton double bill opens with his setting of Rachmaninoff’s Rhapsody on a Theme of Paganini, using the music’s dark turbulence and brilliance to inspire some of his most thrilling choreography. The second half of the programme features Ashton’s delicate, deceptively comic The Two Pigeons – a work rarely performed and a real treat for ballet fans everywhere. Starring Natalia Osipova, Steven McRae, Lauren Cuthbertson, Vadim Muntagirov, Laura Morera and Ryoichi Hirano.

Booking at Kino Rye From Friday December 18 at 11am