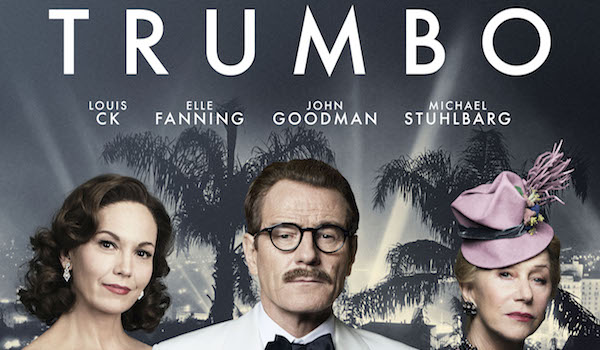 Movies and events coming up at the Rye Kino from Friday February 19 include:

Trumbo [15] 124 mins  In 1947, Dalton Trumbo was Hollywood’s top screenwriter, until he and other artists were jailed and blacklisted for their political beliefs. Trumbo recounts how Dalton used words and wit to win two Academy Awards and expose the absurdity and injustice of the blacklist, which entangled everyone from gossip columnist Hedda Hopper to John Wayne, Kirk Douglas and Otto Preminger. Directed by Jay Roach and starring Bryan Cranston, Helen Mirren, Diane Lane, Elle Fanning and John Goodman.

Deadpool [15] 108 mins  Based upon Marvel Comics’ most unconventional anti-hero, Deadpool tells the story of former Special Forces operative turned mercenary Wade Wilson, who, after being subjected to a rogue experiment that leaves him with accelerated healing powers, adopts the alter ego Deadpool. Armed with his new abilities and a dark, twisted sense of humour, Deadpool hunts down the man who nearly destroyed his life. Starring Ryan Reynolds, Morena Baccarin and Ed Skrein.

Spotlight [15] 129 mins   Spotlight tells the riveting true story of the Pulitzer Prize-winning Boston Globe investigation that would rock the city and cause a crisis in one of the world’s oldest and most trusted institutions. Directed by Academy Award-nominee Tom McCarthy, Spotlight is a tense investigative thriller, tracing the steps to one of the biggest cover-ups in modern times. Starring Michael Keaton, Mark Ruffalo, Rachel McAdams, Stanley Tucci, Liev Schreiber and Brian d’Arcy James.

Youth [15] 124 mins  A retired orchestra conductor is on holiday in the Alps with his daughter and his film director best friend when he receives an invitation from Queen Elizabeth II to perform for Prince Philip’s birthday. From the Academy Award-winning director of The Great Beauty, Paulo Sorrentino, Youth is a warm, witty and deeply moving portrait of love and loss. featuring a career-best performance from Michael Caine and a stellar supporting cast that includes Harvey Keitel, Rachel Weisz, Paul Dano and Jane Fonda.

Dad’s Army [PG] 100 mins   It is 1944 and World War II is reaching its climax. But in Walmington-on-Sea morale, amongst the Home Guard is low. Their new mission is to patrol the Dover army base and it is a great chance to revive spirits and reputation, that is until glamorous journalist Rose Winters arrives to write about their exploits, setting their pulses racing. But MI5 discovers a radio signal sent direct to Berlin from Walmington-on-Sea which means there’s a spy on the loose! The outcome of the war is suddenly at stake, and it falls to our unlikely heroes to stand up and be counted. Starring Toby Jones, Bill Nighy, Michael Gambon, Catherine Zeta-Jones, Ian Lavender, Bill Paterson, Tom Courtenay, Mark Gattis, Felicity Montagu, Annette Crosbie, Alison Steadman and Sarah Lancashire. Alvin and the Chipmunks: the road chip  [PG] 92 mins   Through a series of misunderstandings, Alvin, Simon and Theodore come to believe that Dave is going to propose to his new girlfriend in Miami and dump them. They have three days to get to him and stop the proposal, saving themselves not only from losing Dave but possibly from gaining a terrible stepbrother. Starring Jason Lee as Dave with Kimberly Williams-Paisley and Bella Thorne and the voices of Justin Long, Jesse McCartney, Matthew Gray Gubler, Kaley Cuoco, Christina Applegate and Anna Faris. Goosebumps [PG] 103 mins   Upset about moving from a big city to a small town, teenager Zach Cooper finds a silver lining when he meets Hannah, the daughter of young adult horror author R. L. Stine. But every silver lining has a cloud, and trouble comes after the writer’s imaginary demons are set free on the town of Madison, Delaware. It’s up to Stine, Zach, and Hannah to get all of them back in the books where they belong. Starring Jack Black, Amy Ryan, Dylan Minnette and Odeya Rush.

As you Like it  LIVE: Thursday February 25 at 7pm  Shakespeare’s glorious comedy of love and change comes to the National Theatre for the first time in over 30 years, with Rosalie Craig as Rosalind. With her father the Duke banished and in exile, Rosalind and her cousin Celia leave their lives in the court behind them and journey into the Forest of Arden. There, released from convention, Rosalind experiences the liberating rush of transformation. Disguising herself as a boy, she embraces a different way of living and falls spectacularly in love. Directed by Polly Findlay.

Hangmen LIVE: Thursday March 3 at 7pm  ENCORE: Sunday March 6 at 7:45pm  Following a sell-out run at London’s Royal Court Theatre, Olivier and Academy Award winner Martin McDonagh (The Pillowman, The Cripple of Inishmaan, In Bruges) returns to the West End with Matthew Dunster’s award-winning production of his deeply funny new play. In his small pub in the northern English town of Oldham, Harry is something of a local celebrity. But what’s the second-best hangman in England to do on the day they’ve abolished hanging? Starring David Morrisey, Andy Nyman and Johnny Flynn.

Boris Godunov  LIVE: Monday 21st March at 7:15pm  Richard Jones and Antonio Pappano renew their creative collaboration with this new production of Musorgsky’s historical masterpiece, here seen in its compact 1869 first version in seven scenes. The composer’s vision of Pushkin’s play about Tsar Boris Godunov – who reigned over Russia between 1598 and 1605 – sees Bryn Terfel’s assumption of the title role – one of the most complex characters in opera – while John Graham-Hall appears as the crafty Prince Shuisky and John Tomlinson as the vagabond monk Varlaam.

Tree’s up so it’s show time

All I want for Christmas is…