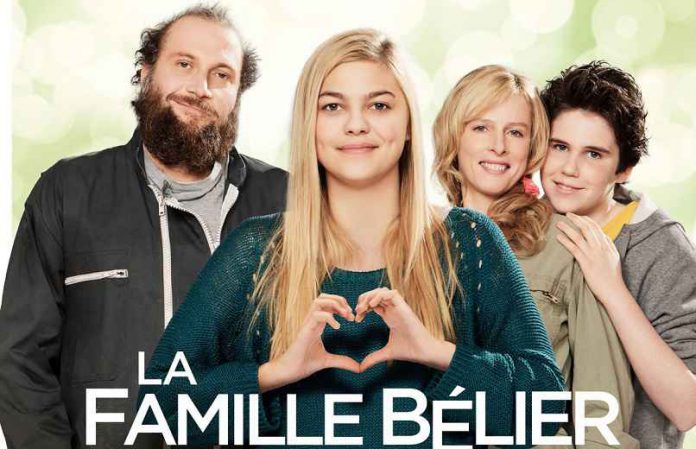 Coming up at the Rye Community Film Club on Friday, March 4– La Famille Bellier (2014 – 106 mins) (French language, with English sub-titles)  Gigi and Rodolphe Belier are a normal couple in many respects, with two children and a small farm, but they differ from the norm in one major aspect…they, and their son Quentin, are all deaf. They rely on their daughter Paula to be their ears and voice when dealing with the outside world, but when her beautiful voice is discovered and a once in a lifetime opportunity arises for her to leave home and join an elite Paris choir, she faces a painful dilemma over a major decision affecting the future of the whole family. (7pm start, doors 6:30)

Movies and events coming up at the Rye Kino from Friday February 27 include:

A Bigger Splash [15] 124 mins   Rock legend Marianne Lane is recuperating on the volcanic island of Pantelleria with her partner Paul when iconoclast record producer and old flame Harry unexpectedly arrives with his daughter Penelope and interrupts their holiday, bringing with him an A-bomb blast of nostalgia from which there can be no rescue. Directed by Luca Guadagnino (I Am Love) and starring Ralph Fiennes, Tilda Swinton, Matthias Schoenaerts and Dakota Johnson.

Trumbo [15] 124 mins  In 1947, Dalton Trumbo was Hollywood’s top screenwriter, until he and other artists were jailed and blacklisted for their political beliefs. Trumbo recounts how Dalton used words and wit to win two Academy Awards and expose the absurdity and injustice of the blacklist, which entangled everyone from gossip columnist Hedda Hopper to John Wayne, Kirk Douglas and Otto Preminger. Directed by Jay Roach and starring Bryan Cranston, Helen Mirren, Diane Lane, Elle Fanning and John Goodman.

Spotlight [15] 129 mins   Spotlight tells the riveting true story of the Pulitzer Prize-winning Boston Globe investigation that would rock the city and cause a crisis in one of the world’s oldest and most trusted institutions. Directed by Academy Award-nominee Tom McCarthy, Spotlight is a tense investigative thriller, tracing the steps to one of the biggest cover-ups in modern times. Starring Michael Keaton, Mark Ruffalo, Rachel McAdams, Stanley Tucci, Liev Schreiber and Brian d’Arcy James.

Youth [15] 124 mins  A retired orchestra conductor is on holiday in the Alps with his daughter and his film director best friend when he receives an invitation from Queen Elizabeth II to perform for Prince Philip’s birthday. From the Academy Award-winning director of The Great Beauty, Paulo Sorrentino, Youth is a warm, witty and deeply moving portrait of love and loss. featuring a career-best performance from Michael Caine and a stellar supporting cast that includes Harvey Keitel, Rachel Weisz, Paul Dano and Jane Fonda.

Dad’s Army [PG] 100 mins   It is 1944 and World War II is reaching its climax. But in Walmington-on-Sea morale, amongst the Home Guard is low. Their new mission is to patrol the Dover army base and it is a great chance to revive spirits and reputation, that is until glamorous journalist Rose Winters arrives to write about their exploits, setting their pulses racing. But MI5 discovers a radio signal sent direct to Berlin from Walmington-on-Sea which means there’s a spy on the loose! The outcome of the war is suddenly at stake, and it falls to our unlikely heroes to stand up and be counted. Starring Toby Jones, Bill Nighy, Michael Gambon, Catherine Zeta-Jones, Ian Lavender, Bill Paterson, Tom Courtenay, Mark Gattis, Felicity Montagu, Annette Crosbie, Alison Steadman and Sarah Lancashire.

Goosebumps [PG] 103 mins   Upset about moving from a big city to a small town, teenager Zach Cooper finds a silver lining when he meets Hannah, the daughter of young adult horror author R L Stine. But every silver lining has a cloud, and trouble comes after the writer’s imaginary demons are set free on the town of Madison, Delaware. It’s up to Stine, Zach, and Hannah to get all of them back in the books where they belong. Starring Jack Black, Amy Ryan, Dylan Minnette and Odeya Rush.

Hangmen LIVE: Thursday March 3 at 7pm  ENCORE: Sunday March 6 at 7:45pm  Following a sell-out run at London’s Royal Court Theatre, Olivier and Academy Award winner Martin McDonagh (The Pillowman, The Cripple of Inishmaan, In Bruges) returns to the West End with Matthew Dunster’s award-winning production of his deeply funny new play. In his small pub in the northern English town of Oldham, Harry is something of a local celebrity. But what’s the second-best hangman in England to do on the day they’ve abolished hanging? Starring David Morrisey, Andy Nyman and Johnny Flynn.

Boris Godunov  LIVE: Monday March 21 at 7:15pm  Richard Jones and Antonio Pappano renew their creative collaboration with this new production of Musorgsky’s historical masterpiece, here seen in its compact 1869 first version in seven scenes. The composer’s vision of Pushkin’s play about Tsar Boris Godunov – who reigned over Russia between 1598 and 1605 – sees Bryn Terfel’s assumption of the title role – one of the most complex characters in opera – while John Graham-Hall appears as the crafty Prince Shuisky and John Tomlinson as the vagabond monk Varlaam.

The Railway Children  Easter Bank Holiday Monday March 28 at 4pm  Filmed at the National Railway Museum in Yorkshire, this is York Theatre Royal’s Olivier award-winning production of E Nesbit’s classic family drama featuring the original locomotive from the much-loved 1970 film. Bobbie, Peter and Phyllis are Pthree children whose lives change dramatically when their father is mysteriously taken away. They move from London to a cottage in rural Yorkshire with their mother, where they befriend the local railway porter, Perks, and embark on a magical journey of discovery, friendship and adventure. But the mystery remains – where is Father, and is he ever coming back? – Booking at Rye Kino from 11am Friday February 26  Running time approximately 125 minutes including a 15 minute interval.

Giselle  LIVE BALLET: Wednesday 6 April at 7:15pm  Giselle is the quintessential Romantic classic, a love affair that begins in the real world and continues beyond the grave. The ballet’s title role also offers one of the great challenges of the ballet repertory, as Giselle transforms from an innocent peasant girl, duped into love, to a forgiving spirit who saves her lover from death. For the ballerina this is a role of two contrasting halves: in Act I she must appear naïve and artless, her dancing alive with an earthy enthusiasm; in Act II she transforms into light and air, her dancing so ethereal as to seem weightless. In Peter Wright’s production, the dual aspect of the ballet is perfectly achieved: the first act dramatized in rich, naturalistic detail and the second with a spectral, moonlit beauty. Starring Marianela Nuñez and Vadim Muntagirov. Composed by Adolphe Adam, revised by Joseph Horovitz and choreographed by Marius Petipa after Jean Coralli and Jules Perrot