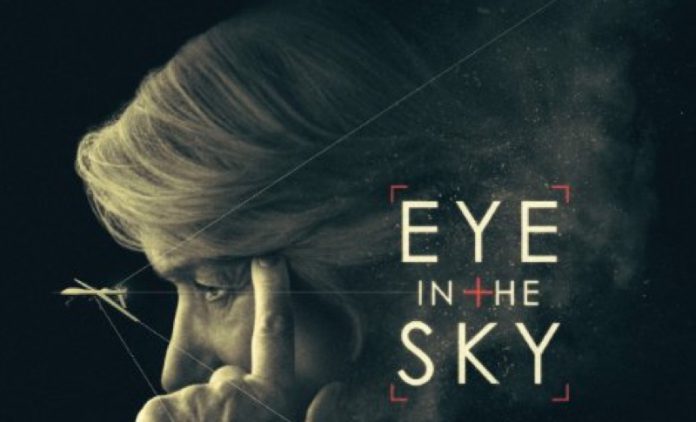 Screening at Kino Rye from Friday April 15 include :

Eye in the Sky [15] 102 mins. Helen Mirren stars as Colonel Katherine Powell, a UK-based military officer in command of a top secret drone operation to capture terrorists in Kenya. Through remote surveillance and on-the-ground intel, Powell discovers the targets are planning a suicide bombing and the mission escalates from “capture” to “kill.” But a nine-year-old girl enters the kill zone triggering an international dispute over the moral, political, and personal implications of modern warfare. Directed by Gavin Hood the film also stars Aaron Paul, Barkhad Abdi, Jeremy Northam and Alan Rickman in his last film role.

Disorder [15] 98 mins Subtitled. Vincent, a French Special Forces soldier just back from Afghanistan, is suffering from post-traumatic stress disorder. He is hired to ensure the security of Jessie, the wife of a rich Lebanese businessman at their luxurious villa. As he starts experiencing a strange fascination for the woman he has to protect, Vincent increasingly seems to fall into paranoia. But what if he is right, and the danger is very real indeed? Directed by Alice Winocour and starring Matthias Schoenaerts, Diane Kruger and Paul Hamy.

Batman v Superman: Dawn of Justice (2D) & (3D) [12A] 151 mins  Fearing the actions of Superman are left unchecked, Batman takes on the man of steel, while the world wrestles with what kind of a hero it really needs. With Batman and Superman fighting each other, a new threat, Doomsday, is created by Lex Luthor. It’s up to Superman and Batman to set aside their differences along with Wonder Woman to stop Lex Luthor and Doomsday from destroying Metropolis. Starring Henry Cavill, Ben Affleck, Gal Gadot, Jesse Eisenberg, Jeremy Irons, Holly Hunter, Amy Adams and Diane Lane.

Eddie the Eagle [12A ] 16 mins  Inspired by true events, Eddie the Eagle is a delightful and funny British comedy-drama about Michael “Eddie” Edwards, an unlikely but courageous ski-jumper who never stopped believing in himself – even as an entire nation was counting him out. With the help of a rebellious and charismatic coach, Eddie takes on the Olympic establishment and wins the hearts of people around the world by taking part in the 1988 Calgary Winter Olympics. Starring Hugh Jackman, Taron Egerton, Christopher Walken, Mark Benton and Keith Allen. Mark Benton will be hosting a Q&A at Kino Rye after the screening this Friday April 15 at 8pm.

High Rise [15] 119 mins  Dr Robert Laing moves into a new apartment seeking soulless anonymity, only to find that the building’s residents have no intention of leaving him alone. Resigned to the complex social dynamics unfolding around him, Laing bites the bullet and becomes neighbourly. As he struggles to establish his position, Laing’s good manners and sanity disintegrate along with the building. Adapted from JG Ballard’s visionary novel, directed by Ben Wheatley and starring Tom Hiddleston, Jeremy Irons and Sienna Miller.

Marguerite [15] 129 mins Subtitled  1921: not far from Paris, a party is being held at the famous Marguerite Dumont’s mansion. Nobody knows much about the mysterious Marguerite except that she has devoted her whole life to her passion: music. As she takes centre stage, she sings enthusiastically but terribly out of tune. When a provocative young journalist decides to write a rave article on her latest performance it gives her the courage she needs to follow her dream – to perform in front of a crowd of complete strangers. Featuring a powerhouse performance from Catherine Frot, Marguerite is a touching and light-hearted feast for the ears. A runaway success in its native France, and featuring music from Mozart, Bach and Vivaldi, Marguerite will live in your heart long after the credits roll. Directed by Xavier Giannoli and starring Catherine Frot, André Marcon, Michel Fau, Christa Théret and Denis Mpunga. Kung Fu Panda 3 (2D) & (3D) [PG] 95 mins   He’s back! Kung Fu Panda returns in DreamWorks Animation’s biggest comedy adventure yet. When Po’s long-lost panda father suddenly reappears, the duo travels to a secret panda paradise to meet scores of hilarious new panda characters. But when the supernatural villain Kai begins to sweep across China defeating all the kung fu masters, Po must do the impossible – learn to train a village full of his fun-loving, clumsy brethren to become the ultimate band of Kung Fu Pandas!

Measure for Measure  Monday May 9 at 7:45pm   After a history of quirky adaptations, this lesser known work is now restored to its classic glory. In this story of secret identities and manipulation, the audience are invited to unravel the layers of intrigue skillfully crafted by a superb cast and the directorial prowess of Dominic Dromgoole in his final production for the Globe Theatre. Starring Mariah Gale as Isabella, Dominic Rowan as Duke Vincentio and Kurt Egyiawan as Angelo. Booking at the Kino from 11am, Friday April 8.

A View from the Bridge  Sunday May 15 at 8m Winning a trio of Olivier Awards, don’t miss this second chance to see the stunning 2014 production of Arthur Miller’s tragic masterpiece, a dark and passionate tale confronting the American dream. In Brooklyn, longshoreman Eddie Carbone welcomes his Sicilian cousins to the land of freedom. But when one of them falls for his beautiful niece, they discover that freedom comes at a price. Starring Mark Strong, Nicola Walker and Phoebe Fox.

Frankenstein LIVE BALLET: Wednesday May 18 at 7:15pm Royal Ballet Artist in Residence Liam Scarlett has chosen Mary Shelley’s gothic classic Frankenstein as the basis for his first full-length narrative ballet for the Covent Garden Main Stage. A story of betrayal, curiosity, life, death and, above all, love starring Steven McRae, Federico Bonelli and Laura Morera, with the music of Lowell Liebermann.