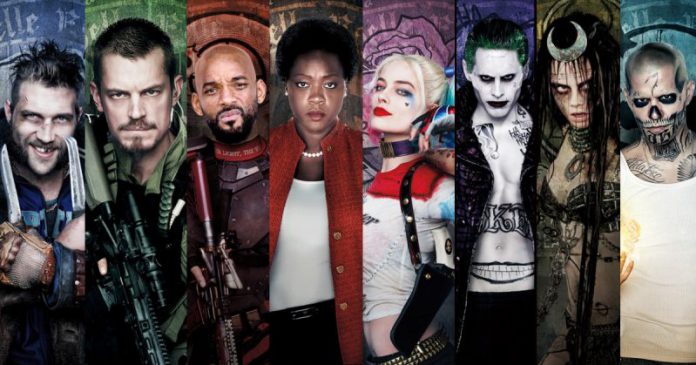 Suicide Squad [15] 123 mins   It feels good to be bad  . . . assemble a team of the world’s most dangerous, incarcerated Super Villains, provide them with the most powerful arsenal at the government’s disposal and send them off on a mission to defeat an enigmatic, insuperable entity. However, once they realise they weren’t picked to succeed but chosen for their patent culpability when they inevitably fail, will the Suicide Squad resolve to die trying or decide it’s every man for himself? Starring Will Smith, Jared Leto, Margot Robbie, Joel Kinnaman, Viola Davis and Cara Delevingne.

Swallows & Amazons [PG] 97 mins  An enchanting new take on the beloved novel by Arthur Ransome, Swallows & Amazons tells the story of the Walker children, whose summer holiday in the Lake District sees them sailing out on their own to a local island, only to find themselves in competition with a rival group of children who call themselves the Amazons and ultimately an adventure far bigger than they could have imagined. Combining a great British cast with stunning locations and a classic story, Swallows & Amazons is an exciting and heart-warming adventure that will be a must-see for family audiences this summer. Directed by Philippa Lowthorpe and starring Kelly Macdonald, Rafe Spall, Andrew Scott, Jessica Hynes, Richard Bremmer and Harry Enfield.

David Brent: Life on the Road [15] 96 mins  Now working as a rep selling cleaning (and ladies personal hygiene) products up and down the country, David Brent hasn’t given up his dream of becoming a rock star – or more specifically, singer/songwriter for fledgling rock band “Foregone Conclusion”‘. As he assembles a group of mercenary session musicians, a talented sidekick for street cred and an overpriced yet underwhelmed tour manager, he embarks upon a self-financed UK tour coming to a venue near every major city near you. The hilarious big screen follow-up to the award-winning sitcom The Office stars Ricky Gervais, Oliver Maltman, Doc Brown, Thomas Kadman, Michael Keat and Carol Walton.

Maggie’s Plan [15] 99 mins   Maggie has never sustained a relationship longer than six months – but desperately wants a baby. She has hardly begun the artificial insemination process when she falls in love with John, an unhappily married academic hailed as “the bad boy of fictocritical anthropology.” Maggie’s rejuvenating enthusiasm lures John away from his brilliant but domineering Danish wife Georgette and the two settle down to raise their daughter. Everything has gone according to Maggie’s plan; so why isn’t she happy, and what meddlesome scheme will she concoct next? Rebecca Miller’s charming, sophisticated and funny exploration of the unexpected complexities of modern romance stars Greta Gerwig, Ethan Hawke and Julianne Moore.

Pete’s Dragon (2D) & (3PGD) 103 mins   For years, old wood carver Mr  Meacham has delighted children with his tales of the fierce dragon that resides deep in the woods. To his daughter, Grace, who works as a forest ranger, these stories are little more than tales until she meets Pete, a mysterious 10-year-old with no family and no home who claims to live in the woods with a giant, green dragon named Elliott, who seems remarkably similar to the dragon from Mr Meacham’s stories. Grace sets out to determine where Pete came from, where he belongs and the truth. Starring Robert Redford, Bryce Dallas Howard and Oakes Fegley.

Further events at Kino include the following :

The Deep Blue Sea   LIVE: Thursday September 1 at 7pm  Helen McCrory returns to the National Theatre in Terence Rattigan’s devastating masterpiece, playing one of the greatest female roles in contemporary drama. When Hester Collyer is found by her neighbours in the aftermath of a failed suicide attempt, the story of her tempestuous affair with a former RAF pilot and the breakdown of her marriage to a High Court judge begins to emerge. With it comes a portrait of need, loneliness and long-repressed passion. Behind the fragile veneer of post-war civility burns a brutal sense of loss and longing. Tom Burke also features in Carrie Cracknell’s critically acclaimed new production.

Turandot from Sydney Harbour   Screening for one night only in cinemas across the UK on Thursday September 15. Don’t miss this incredible opera event with lavish sets, extraordinary costumes and a spectacular firework display from Sydney’s beautiful harbour. When the heroic high notes of ‘Nessun Dorma’ ring out, your soul stirs. It is impossible to resist – the climax of an exotic adventure, captured perfectly in music. Set against the magnificent backdrop of the Sydney Opera House, Puccini’s Turandot recounts the Chinese fable of the beautiful and powerful Princess Turandot.

The Beatles Live Event: Eight Days a Week  Screening live at Kino Rye on Thursday September 15 at 6pm  We are delighted to be screening the highly anticipated documentary feature film about The Beatles’ phenomenal early career with a World Premiere in London’s Leicester Square, a star-studded red carpet event which will be live streamed to Kino Rye. Directed by Oscar-winner Ron Howard, this is the not-to-missed story of the band’s exceptional touring years – an intimate portrait of the band, and a behind-the-scenes look at The Beatles on tour. Exploring the effect it had on their relationships, as well as their musical evolution, and looking at how they transformed the world of music, the film features interviews, unheard music and exclusive concert footage from the biggest band of all time.

Cymbeline  LIVE: Wednesday September 28 at 7pm  Screening live from Stratford-upon-Avon, Shakespeare’s rarely performed tragicomic romance is directed by Melly Still who designed Tales from Ovid and Midnight’s Children for the RSC. Melly directs Gillian Bevan in the role of Cymbeline, the first woman to take on the role for the RSC, and Bethan Cullinane as Imogen. Cymbeline is Shakespeare’s coming of age tragicomic romance. A story of power, sexuality and identity – stunningly retold for the 21st century.  Running time approximately 210 minutes including an interval.