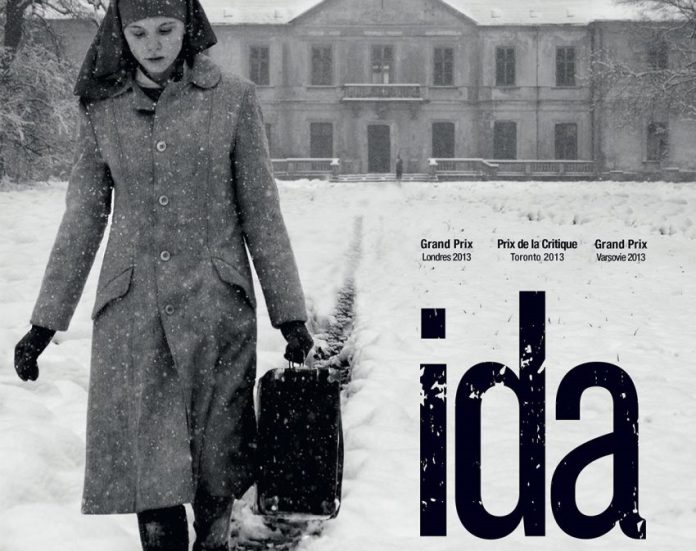 Ida  [12A] 2013, 82 mins;  Polish dialogue with English sub-titles. At 7pm, doors open 6:30pm. Tickets £5 on the door.Set in 1960s Poland, this is the story of Anna, a young orphan brought up in a convent, who is about to take her vows as a nun. Before doing so she meets Wanda, her only living relative and discovers a dark family secret dating back to the years of the German occupation. They set out on a journey to uncover their past, which leads Anna to question all that she has been brought up to believe. With Agata Trzebuchowska as Anna in a film which won both Best Foreign Language film Oscar and BAFTA in 2015.

A Street Cat Named Bob [12A] 103 mins
The film adaptation of James Bowen’s much-loved, best-selling book, which tells the moving and life-affirming true story of the unlikely friendship between a young homeless busker, James Bowen, and the stray ginger cat who changed his life. Starring Luke Treadaway with the real-life Bob, Ruta Gedmintas, Joanne Froggatt, Anthony Head and Beth Goddard.

The Light Between Oceans [12A] 133 mins
From acclaimed director Derek Cianfrance (Blue Valentine, A Place Beyond The Pines), and based on the extraordinary best-selling novel from ML Stedman, this is a beautiful yet heartbreaking story about fate, love, moral dilemmas and the lengths to which one couple will go to see their dreams realised. Starring Michael Fassbender, Alicia Vikander, Rachel Weisz, Bryan Brown and Jack Thompson.

I, Daniel Blake [15] 100 mins
Directed by Ken Loach and winner of the Palme d’Or at Cannes 2016. Daniel Blake, 59, who has worked as a joiner for most of his life in Newcastle needs help from the State for the first time ever following an illness. He crosses paths with Katie, a single mother whose only chance to escape a homeless hostel in London has been to accept a flat in a city she doesn’t know, some 300 miles away. Daniel and Kate find themselves caught on the barbed wire of welfare bureaucracy in this powerful film written by Paul Laverty and starring Dave Johns and Hayley Squires.

Starfish plus one-off Q&A [15] 95 mins  LIVE: Monday, November 7 at 8pm
Pippa Cross, the producer of Starfish, will be holding a Q&A at Kino Rye on November 7. Pippa is a successful TV and film producer with movie credits including Kino favourites Summer In February and Chalet Girl. She recently came to talk to the Kino audience about Desert Dancer, while her past credits include My Left Foot, Vanity Fair and Jack And Sarah. All tickets £10 to include a regular glass of wine, coffee or soft drink.

The film is the true moving story of Tom and Nicola Ray whose love is tested to the limit when their perfect life falls apart. When Tom puts his small daughter to bed one chilly December evening, he has everything he could ever want – the house of his dreams, the life of a writer, a beautiful wife and a second baby on the way, By the next morning, all of this is in jeopardy as Tom succumbs to the devastating illness that is sepsis. As Tom and Nic battle to hold their family and their marriage together, the strength of their relationship is the only thing that can save them. Starring Joanne Froggatt, Tom Riley, Phoebe Nicholls, Michele Dotrice, Simon Bamford and Alexandra Doyle. Kubo And The Two Strings 2D  [PG] 102 mins
An epic action-adventure set in a fantastical Japan from acclaimed animation studio LAIKA. Clever, kindhearted Kubo ekes out a humble living, telling stories to the people of his seaside town, but his quiet existence is shattered when he accidentally summons a spirit from his past. With the voices of Ralph Fiennes, Matthew McConaughey and Charlize Theron.