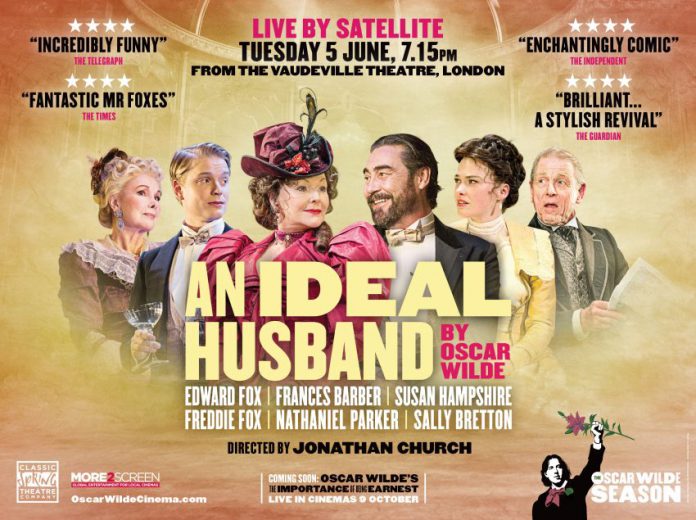 Oscar Wilde Season Live
An Ideal Husband, 165mins. Tuesday June 5 at 7:15pm
Live from the Vaudeville Theatre in London’s West End. Tickets on sale now. Running time approximately 165 minutes including an interval
Directed by Jonathan Church, this entertaining and still topical play brings an act of political sin into the heart of the English home. As an ambitious government minister, Sir Robert Chiltern’s smooth ascent to the top seems assured until Mrs Cheveley appears in London with damning proof of his previous financial chicanery. The talented ensemble cast includes real-life father and son Edward and Freddie Fox, Olivier Award-nominated Frances Barber, Olivier Award-winner Nathaniel Parker, Sally Bretton and Susan Hampshire.
Royal Ballet Live
Swan Lake (2018) 180mins. Tuesday June 12 at 7:15pm. Live from Covent Garden. Tickets on sale now
Swan Lake has had a special role in the repertory of The Royal Ballet since 1934. This season The Royal Ballet creates a new production with additional choreography by Artist in Residence Liam Scarlett. While remaining faithful to the Petipa-Ivanov text, Scarlett will bring fresh eyes to the staging of this classic ballet, in collaboration with his long-term designer John Macfarlane.
Cast to be announced.
Berliner Philharmoniker Live
Sir Simon Rattle’s Farewell Concert, Wednesday June 20 at 6:30pm. Tickets on sale now. Running time approximately 120 minutes without an interval.
On  November 14 1987, a promising conductor called Simon Rattle made his Berliner Philharmoniker debut with Gustav Mahler’s Sixth Symphony. Mahler’s multifaceted work is again on the programme when Sir Simon appears for the last time as chief conductor of the Berliner Philharmoniker. Sir Simon Rattle’s Farewell Concert will be broadcast live with exclusive interviews and programme insights featured as part of this historic event.
Glyndebourne Live
Madama Butterfly, 210mins. Thursday June 21 at 6:30pm. Tickets on sale now
Praised by critics as a ‘thoughtful, provocative staging’ and a ‘scathing study of exploitation’, Annilese Miskimmon’s production updates the action to the 1950s. This post-war setting brings to the fore the darker elements of Puccini’s story. Little wonder that this opera has inspired numerous contemporary adaptations and reimaginings, including the hit musical Miss Saigon. Cast includes Olga Busuioc, Elizabeth DeShong, Joshua Guerrero, Michael Sumuel and François Piolino. Featuring the London Philharmonic Orchestra with The Glyndebourne Chorus.
Andre Rieu Live: Maastricht 2018
Amore – My Tribute to Love, live from Maastricht on Sunday July 8 at 3pm. Tickets: adults £20, members and concessions £18, children 14 and under £12.50
One of the most popular live acts in the world, the King of the Waltz André Rieu has announced that his 2018 Maastricht concerts will be screened in more than 2,000 cinemas worldwide across the weekend of July 28-29, as he performs his home-town shows this year with a celebration of love. Amore, My Tribute to Love, is the renowned violinist’s expression of his love for music and for both of his families – his wife and children and of course his Johann Strauss Orchestra, with which he has performed for more than 30 years. It follows on from the release of his album Amore last year, which features his own versions of classic love songs from the worlds of popular and classical music.
Good Morning Britain presenter Charlotte Hawkins hosts the presentation, interviewing fans and soaking up the joyous atmosphere that bursts right through the cinema screen – as well as catching an exclusive chat with André the moment he steps off stage.