Films showing from Friday August 9 at the Kino:

The Angry Birds Movie 2 (U) 97 mins, and Kids’ Club, see below
The flightless angry birds and the scheming green piggies take their beef to the next level! When a new threat emerges that puts both Bird and Pig Island in danger, Red, Chuck, Bomb and Mighty Eagle team up with pigs Leonard, his assistant Courtney and techpig Garry to forge an unsteady truce and form an unlikely superteam to save their homes.

Fast & Furious: Hobbs & Shaw (12A) 136 mins
Ever since hulking lawman Hobbs, a loyal agent of America’s Diplomatic Security Service, and lawless outcast Shaw, a former British military elite operative, first faced off in 2015’s Furious 7, the duo have swapped smack talk and body blows as they’ve tried to take each other down. But when cyber-genetically enhanced anarchist Brixton gains control of an insidious bio-threat that could alter humanity forever – and bests a brilliant and fearless rogue MI6 agent, who just happens to be Shaw’s sister – these two sworn enemies will have to partner up to bring down the only guy who might be badder than themselves. Directed by David Leitch and starring Dwayne Johnson, Jason Statham, Vanessa Kirby, Eiza González, Idris Elba and Helen Mirren. 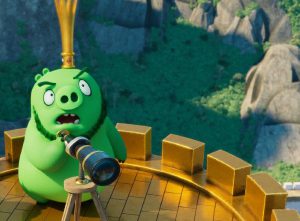