Films showing from Friday September 6 at the Kino:

The Souvenir (15) 120 mins
A shy but ambitious film student falls into an intense, emotionally fraught relationship with a charismatic but untrustworthy older man. One of Britain’s most unique film-makers Joanna Hogg (Archipelago, Unrelated) presents a deeply personal examination of her own youthful experiences in this beautifully crafted portrait of self-discovery starring Honor Swinton Byrne, Tilda Swinton, Richard Ayoade and Tom Burke.

The Mustang (15) 97 mins
Roman, a convict in a rural Nevada prison who struggles to escape his violent past, is required to participate in an “outdoor maintenance” programme as part of his rehabilitation. Spotted by a no-nonsense veteran trainer, Roman is accepted into the wild horse training section where hefinds his own humanity in gentling an especially unbreakable mustang. Starring Matthias Schoenaerts, Jason Mitchell and Bruce Dern.

Photograph (15) 109 mins
Pressured by his grandmother to get married, a struggling street photographer convinces a shy stranger to pose as his fiancee. They soon develop an unexpected bond that transforms both of them in ways they could not have imagined. Written and directed by Ritesh Batra (The Lunchbox) and starring Nawazuddin Siddiqui and Sanya Malhotra.

Mrs Lowry & Son (91mins) PG
Beloved British artist LS Lowry lived all his life with his overbearing mother Elizabeth. Bed-ridden and bitter, Elizabeth actively tried to dissuade her bachelor son from pursuing his artistic ambitions, while never failing to voice her opinion at what a disappointment he was to her. Starring Timothy Spall and Vanessa Redgrave.

Kino Members’ Club
Wednesday 11 and Friday September 13 at 7:30pm
Twice a month, the Silver Room at Kino Rye is transformed into a member’s screening lounge with a complimentary glass of prosecco, nibbles and a favourite film.

My Big Fat Greek Wedding (2002) PG, 95 mins
Everyone in the Portokalos family worries about Toula (Nia Vardalos). Still unmarried at 30, she works at Dancing Zorba’s, the Greek restaurant owned by her parents, Gus (Michael Constantine) and Maria (Lainie Kazan). After taking a job at her aunt’s travel agency, she falls in love with Ian Miller (John Corbett), a teacher who is tall, handsome and definitely not Greek. Toula isn’t sure which will be more upsetting to her father, that Ian is a foreigner or that he’s a vegetarian. 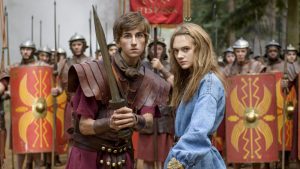 Horrible Histories The Movie: Rotten Romans (PG) 92 mins
Who are the Celts? What have the Romans ever done for us? And why is Emperor Nero dousing himself in horse wee? The all-conquering Romans rule the civilised world – and that includes “the stain” that is Britain. Atti, a smart and quick-witted Roman teenager, manages to upset Emperor Nero with one of his schemes. For punishment, Atti is sent to work in a cold and wet Britain where he also meets the Celts… Starring Emilia Jones, Sebastian Croft, Nick Frost, Kim Cattrall, Derek Jacobi andCraig Roberts.