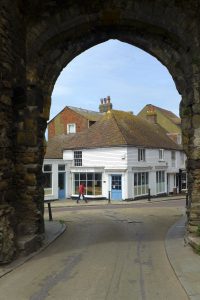 As promised in last week’s Rye News article, Time to Stand and Stare , Alan Dickinson has designed the first in a series of themed walks in Rye during lockdown.  This week he looks mainly at unusual shopfronts in the High Street. The principal commercial street in this defended port town had a medieval gate at either end. The Strand Gate at the foot of the mint was demolished in the 18th century but the Landgate, where the walk begins, still forms the starting point of a walk in Rye High Street. There are images of all the buildings to view in the gallery at the bottom of this post.  Click on the images to enlarge.

Start from the Landgate

We tend to take the historic monuments in Rye for granted as residents, but the Landgate is a remarkable survival from the 14th century when Rye was on the frontline of defence in the Hundred Years War against France. Looking back through the arch, the Outside Inn is a historic building on an important corner site, just outside the town walls of Rye. It has a 13th century stone vaulted cellar beneath the present building which dates from about 1600 and was an inn, the “Rye Galley”. Later, it was a hatter’s shop and Bragge’s antique shop from 1929. It has recently been opened as a wine bar, returning to its original use.

On your left, the steep slope down to Fishmarket Road was planted and divided off from the start of the high Street known as Hilders Cliff by municipal railings and a retaining wall from 1867. The two lookouts were later additions; the closer from 1914 in memory of John Symonds Vidler, a local ship owner much involved in affairs in the town, and the further from 1935 in honour of E F Benson, the author of “The Mapp and Lucia” novels who lived at Lamb House. In the background, the tall buildings are Seaview Terrace, a development from the 1880s built on the edge of the cliff off East Street. The green area stretching to the Ypres Tower was once the site of streets of houses known as “The Baddings Ward” lost to landslip into the sea in the 14th century

At the start of the High Street proper, the imposing shop on the right looking over the Town Salts has a long history as an ironmongers from the early 18th century when it was owned by the Guy family. They were succeeded by the Hilders in the early 19th century. The building dates from this period and was extended on the left to form a four storey furniture showroom, now the Fig Tearoom

Among other shop owners taking the opportunity of the lockdown to carry out painting is ‘Sweet Shop Tony’ of Britcher & Rivers who discovered this antique glazed fascia sign (one of three surviving in the High street) when opening his confectioner’s shop several years ago. The sign dates from 1919 when a men’s outfitters, later known as Rivers, was opened.

The Monastery, the Augustinian Friary (5)

Looking back from the top of the Conduit Hill research by David and Barbara Martin has shown that this whole block of the town was part of the Monastery, the Augustinian Friary (covered in scaffolding on the left), which moved to this site in 1378 following the landslip. The monastery owned the street frontage and developed it with shops, originally about three metres further back. One building has kept its medieval timber framed front wall fossilised behind. In the foreground, Café Zara occupies the former Custom House, a Georgian building which was later the home of Adams of Rye, Printers who later moved across the road to its present building

The large building now occupied by Adams was sold as a building site in 1736 when the present structure was developed including brick barrel vaulted wine cellars beneath. It started life as four houses, one of which survives at the far end and was taken over by an early mail order pioneer, John Neve Masters, a watchmaker in the Victorian period. It is one of several buildings in Rye clad in mathematical tiles, shaped clay tiles nailed to timber framing and pointed between to simulate brickwork.

On the opposite side of the road on a corner site adjoining East Street is another fine 18th century shopfront with a long history as a chemists, now the Apothecary Coffee House. Recorded back to 1787, the chemist’s business lasted until a few decades ago. The original labelled drawers inside were stripped out but were recovered by the then Rother Conservation Officer in the 1970s from an antique shop on Romney Marsh

Another of the three antique glass fronted fascia signs survives at 100 High Street together with the canopy from which Ashbee & Sons Meat was hung. The butcher’s business had a shop in East Street next to Rye Museum and moved to this site about 1900 taking over an established business

In a prominent position opposite Lion Street looking up to the church tower is Grammar School Records. This very fine early decorative brick façade was built in 1736 by Thomas Peacock, a Rye councillor who established it as the town’s grammar school. It was in use until the present Rye College site was developed in 1908 and was converted from meeting rooms to the present shop and flats over in the 1980s (featured photograph)

A little further on is the third of the glass fronted fascia signs at Day Lewis Pharmacy. Horrell Chemist’s business dates from the 1890s.

Two other long established businesses only changed in recent years; the Rye Bookshop was formerly occupied by Boots the Chemist, one of the later of the multiple retailers to move into Rye (in 1934), the yellow brick building was Sladen House earlier belonging to Kingsnorth Reeve, an auctioneer. To the left, the red building is Craft Magic. It was a very long established bookseller and stationers from the 18th century, taken over in 1929 by the Goulden family, and for many years the Martello Bookshop

Nearing the western end of the High Street, The Edinburgh Woollen Mill has an Edwardian shopfront with green glazed columns having the monogram “ITS” at the capitals, for “International Tea Stores” one of the earlier multiples in the town (from about 1890).

Finally, at the western end of the High Street adjoining The Mint, one of the recently closed banks, NatWest, occupied a fine early 19th century bow fronted house. The London & County Bank was established there before 1859.

We welcome any comments or stories you may have about these buildings.  Alan will be preparing further walks on Significant Houses and Industrial Rye