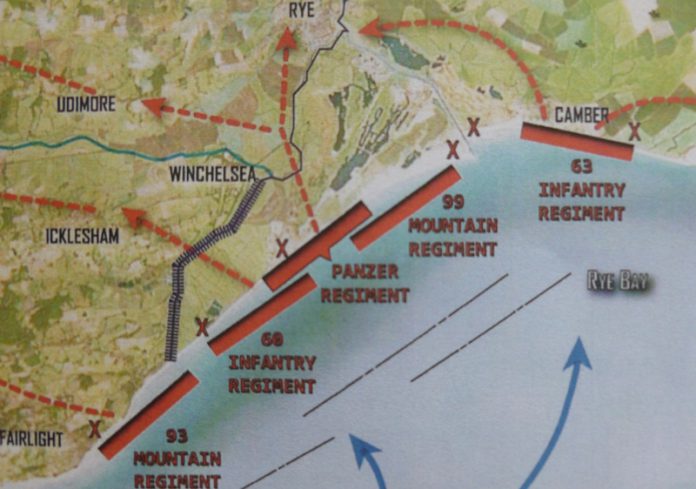 In 1940, Nazi Germany had plans to land army and infantry in Rye Bay, which was part of Zone C in Hitler’s invasion plans. The project known as Unternehmen Seelowe (Operation Sea Lion) included a mountain brigade being positioned at Cliff End near Fairlight, armed seizure of the Royal Military Canal and tank forces surrounding Winchelsea. A Panzer regiment was detailed to head to Rye and then break off along the Udimore ridge towards Broad Oak and Beckley.

The counter plans of the British Army’s Rye Sector Defence Scheme were unambiguous: “The Rye sector will be held, to the last round and the last man. There will be no withdrawal from the positions ordered.” There were about 500 soldiers from the 1st Battalion of the Royal Irish Fusiliers and the Royal Devon Yeomanry allocated to the defence scheme, along with more than 250 Home Guard. A defensive ring was constructed around Rye with artillery batteries, pill boxes and tank traps.

Had the invasion taken place, up to 30,000 German troops would have been assigned to the Rye Bay area. In the event, the Battle of Britain prevented the German Luftwaffe from gaining air superiority over the English Channel. Hitler’s plans were scuppered, the operation was postponed and then aborted and thankfully the Wehrmacht’s 16th Army never did land at Camber.

Thanks to Peter Mackenzie Smith for his talk on Rye in the Second World War, delivered during the Rye arts festival. Map of Rye Bay courtesy of Peter Schenk, Conway Maritime Press Ltd 1990, and map of Rye’s defensive ring courtesy of Rye College local his