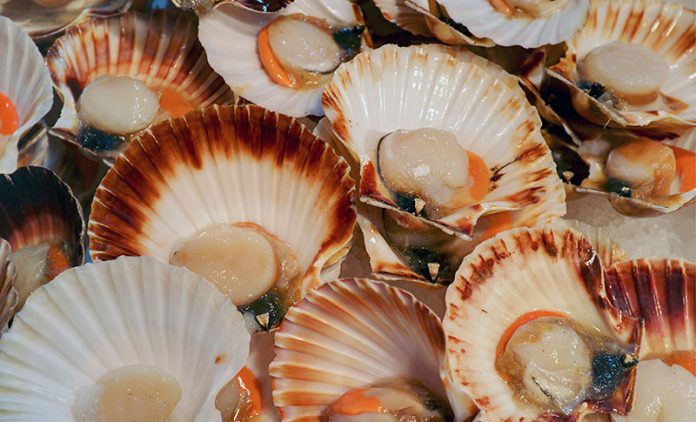 The town has been plastered with posters and, if you’ve been on social media, you’ll have seen photos of locals with scallop shells all promoting Rye Bay Scallop Week 2015. It’s here, starting tonight (Friday February 20) and 28 restaurants in and around Rye will be taking part.

Highlights kick off with a comedy night at The George in Rye, headlined by Capital FM’s Greg Burns. Meanwhile, at The Ypres, the fantastic Kangaroo Juice will be performing all your favourite covers.

On both Saturday mornings (February 21 and 28) Market Fisheries’ Russell Drew will be found down at Simmons Quay, Rock Channel East, talking about the local scallop industry, performing shucking demonstrations and offering taster samples of scallop ceviche and chowder. There will be scallop and wine tasting from midday at Olde Worlde Wines, Cinque Ports Street: top Rye chef Kyle Tatner will be cooking up a smoked Rye Bay fish chowder and slow-braised pork belly and Rye Bay scallop kebabs with sticky sweet glaze.

On Wednesday February 25 you can find John Botterell at the Rye Farmers’ Market on The Strand, where he will be cooking the freshest scallops in the way he recently described to Janet Street-Porter on BBC1’s A Taste of Britain.

Friday February 27 has a gig not to miss at the Queen’s Head Inn (Landgate). Kevin Armstrong, who is to play with Iggy Pop at the Wembley concerts opening for the Foo Fighters, will be performing an acoustic set with X Factor’s Hannah Bradbeer.

It’s also not too late to get your wheelbarrow team together for the “What a Load of Scallops” race on Sunday March 1; contact Theo at the Ship Inn if you want to take part in this extremely silly (but very fun) event.

There is a mass of information on the website, with menus in detail and mouth-watering pictures, plus some history. To find out about everything that will be going on during Rye Bay Scallop Week, visit the website.