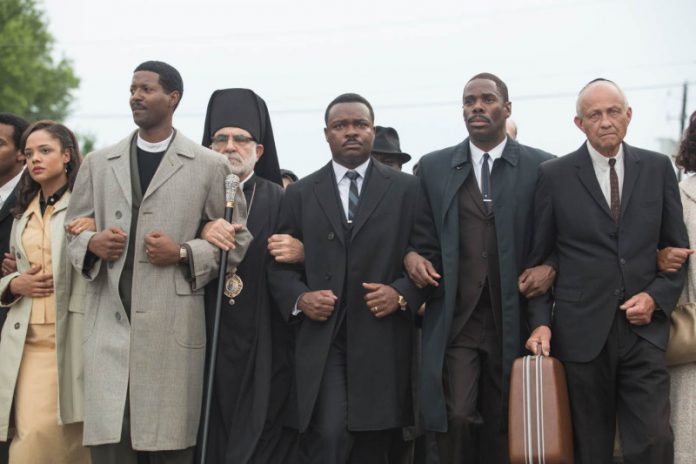 This week’s featured film showing at Rye Kino from Friday February 20 is Selma (128 mins [12A]), pictured above. Selma is the story of a movement chronicling the epic march from Selma to Montgomery, culminating in President Johnson signing the Voting Rights Act, one of the most significant victories for the civil rights movement. The film stars David Oyelowo, Tom Wilkinson, Carmen Ejogo, Alessandro Nivola, Tim Roth and Oprah Winfrey.

Love is Strange 129 mins [15] John Lithgow and Alfred Molina both give career-best performances alongside Marisa Tomei in this funny and moving tale of life, love and long-term companionship. After nearly four decades together, Ben and George finally tie the knot in an idyllic wedding ceremony. But when George loses his job they have to live apart, struggling with the pain of separation, challenged by inter-generational tensions and the capricious family dynamics of their new living arrangements.

Ex Machina 108 mins [15] A stylish psychological thriller starring Domhnall Gleeson, Oscar Isaac and Alicia Vikander. Caleb, a 24 year old coder wins a competition to spend a week at a retreat belonging to the reclusive Nathan. But when Caleb arrives he finds that he will have to participate in a fascinating experiment with the world’s first true artificial intelligence, housed in the body of a beautiful robot woman, Ava. Truths, emotions and motives are blurred as the relationship between them intensifies.

Into the Woods 125 mins [PG], pictured below. This humorous and heartfelt musical follows the classic Brothers Grimm fairy tales of Cinderella, Little Red Riding Hood, Jack and the Beanstalk and Rapunzel – all tied together by an original story involving a baker and his wife, their wish to begin a family and a wicked witch who has put a curse on them. Directed by Rob Marshall, with music by Stephen Sondheim and starring Meryl Streep, Emily Blunt, James Corden, Anna Kendrick, Chris Pine, Johnny Depp, Frances de la Tour, Tracey Ullman, Simon Russell Beale and Annette Crosbie. Kids Club at the Kino features Paddington and Shaun the Sheep – great children’s (and young at heart adults) films for only £6.50 and for every child ticket bought, an adult goes free!  Grab a Kids Club loyalty card, have it stamped five times and get your sixth ticket free!

More details of upcoming features can be seen at the Kino and Rye Community Centre Film Club websites.